The International Center for Transitional Justice denounces the passage of Tunisia’s deeply flawed “Administrative Reconciliation” law, which grants amnesty to public officials who were involved in corruption during the dictatorship but who claim they did not personally gain from it. 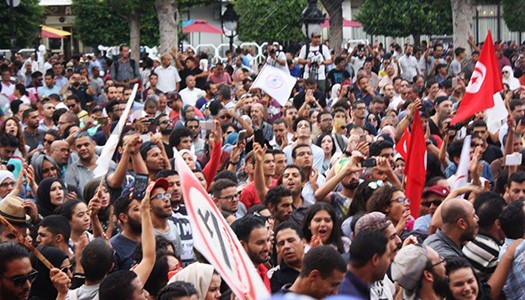 TUNIS, September 14, 2017—The International Center for Transitional Justice denounces the passage of Tunisia’s deeply flawed “Administrative Reconciliation” law, which grants amnesty to public officials who were involved in corruption during the dictatorship but who claim they did not personally gain from it.

“The law emboldens the corrupt, the powerful and the well connected, while undermining the laws and institutions put in place since the fall of Ben Ali to fight widespread corruption,” said David Tolbert, president of ICTJ. “Let’s be clear, the new law has nothing to do with reconciliation, as its name suggests. Instead, it promotes impunity. As such, this bill betrays all Tunisians who stood up during the revolution for dignity and democracy.”

For two years, the bill was actively opposed by a broad spectrum of Tunisian activists and international human rights and anti-corruption groups, including ICTJ. They saw the law as undermining accountability, truth seeking and other efforts to address the past.

“Tunisia was one of the few countries of the ‘Arab Spring’ that was able to transition peacefully to a constitutional democracy,” said Salwa El Gantri, ICTJ’s head of office in Tunisia. “Tunisians knew they had to make a clean break with the past by enacting laws that would ensure abuses would never happen again and hold perpetrators accountable.”

“But this law shields public officials who facilitated corruption from prosecution, with no possibility that they will face justice. It also violates the principle of equality before the law and economic justice for victims who legitimately expect that corrupt officials will be held accountable,” added El Gantri.

Among its many flaws, the new bill offers no mechanism for establishing the facts about past corruption and does not require individuals who receive amnesty to provide any information or evidence about their past conduct or where their assets came from. Nor does it offer any remedies to redress or stop illegal conduct.

The legislators who approved the law argue that it will apply only to those public officials involved in corruption who claim not to have personally profited during the dictatorship. However, according to ICTJ’s analysis, the law does not lay out a process for determining whether their claims are true, instead leaving it to the public to dispute individual amnesties.

The 2011 revolution was sparked in part by frustration over the marginalization of significant parts of Tunisian society and the lack of economic opportunities due to corruption. Combating corruption and impunity for officials who abused their power were central demands of the revolution.

The need for government reform was acknowledged in the country’s historic Transitional Justice Law, passed in 2013, which sets out a clear process, as well as standards and new institutions, for “dismantling and rectifying the system of corruption, oppression and tyranny” in Tunisia.

However, frustration and resentment over new policies, which seem to many to reverse that process and return the country to the corrupt ways of the past, have led to protests. In the days leading up to yesterday’s vote and since, demonstrations have spread beyond Tunis to the country’s interior, where the 2011 revolution started.

“The public needs to continue to hold the government accountable to the demands of the revolution and the process we began more than six years ago to create a new, fairer Tunisia,” said Salwa El Gantri. “Although this law threatens that process, it is not the end of Tunisia’s transition, but part of the long struggle for accountability and a country where corruption and impunity are no longer tolerated.”

“ICTJ stands ready to support legal challenges to the law on constitutional grounds, as human rights defenders test remedies for abuses of power in the new Tunisia.”

PHOTO: Protestors gather in Tunis on September 15 in opposition to the law. (Lina Ben Mhenni)