ICTJ Receives Award for Contributions to the Gambia’s Truth, Reconciliation and Reparations Commission

On July 13, 2021, the Gambia’s Truth, Reconciliation and Reparations Commission (TRRC) presented an award to ICTJ for its sustained support of the commission and its commitment to the country’s transitional justice process. The award comes as the TRRC concludes its work and prepares to submit its final report to the country’s president by September 30, 2021. 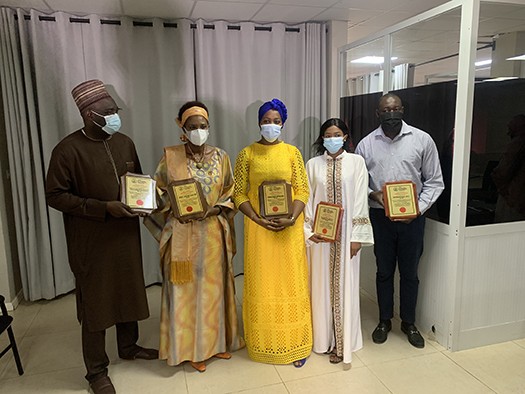 On July 13, 2021, the Gambia’s Truth, Reconciliation and Reparations Commission (TRRC) presented an award to ICTJ for its sustained support of the commission and its commitment to the country’s transitional justice process. The award comes as the TRRC concludes its work and prepares to submit its final report to the country’s president by September 30, 2021.

The Gambia’s parliament created the TRRC in October 2018 to investigate the human rights violations committed during the 1994-2016 dictatorship of former President Yahya Jammeh. The commission was tasked with disclosing the truth about these abuses and recommending appropriate measures to guarantee their non-recurrence and to repair the harms caused to victims. In establishing the TRRC and several other processes, the country decided rightly to embark on a transitional justice path, despite having limited resources.

The TRRC began its operations in January 2019, conducting public hearings and taking statements from victims and others affected by the past human rights abuses. It also undertook extensive outreach activities to ensure broad participation in the process. Very quickly, the commission earned broad public and political support, and Gambians across the country and around the world tuned into the public hearings, which were broadcasted live on the radio and television.

“At the beginning of the hearings, the commission was criticized for not being victim centered as they were more focused on perpetrators than victims and prioritized a criminal justice approach,” recalled ICTJ’s Head of Program for the Gambia Didier Gbery. “But slowly, things changed as a nationwide statement taking process began and women’s ‘listening circles’ were held to consider more the views of victims, especially those living in remote areas.” Unfortunately, however, the COVID-19 pandemic interrupted many of these activities and brought some to an abrupt end.

From the outset, a key objective of the Gambia’s transitional justice process was the mainstreaming of gender issues. The TRRC took specific steps to encourage women’s participation in the process, through the establishment of the Women’s Affairs Unit within the commission, a women’s committee led by the lead council’s office, and the abovementioned women listening circles, organized with support from ICTJ.

Despite these efforts, women’s participation remained a challenge throughout the truth-seeking process, mainly due to a pervasive culture of silence around sexual and gender-based violence (SGBV), concerns about stigmatizing or re-traumatizing victims, and society’s predominant patriarchy. The lack of safe spaces for women to share their testimonies and an inadequate gender-sensitive approach also contributed to women victims’ reluctance to participate.

To help ensure that the process adequately addressed the needs and demands of women victims, ICTJ in collaboration with three local women’s groups, conducted a series of consultations in the rural districts of Sintet, Janjanbureh, and Basse to document the experiences of women in these communities during the dictatorship. ICTJ then compiled and analyzed the data collected in the report Women Experiences of Dictatorship in the Gambia, which representatives of the women’s groups submitted to the TRRC in December 2019. Through these consultations, ICTJ not only created spaces and alternative opportunities for more women to give their statements but helped build the capacity of women victims in rural areas to participate in the process.

To increase women’s participation in the truth-seeking process, ICTJ worked to build bridges between women victims and civil society organizations as well as policymakers. It also partnered with several women’s civil society groups to advocate for the commission to recognize women victim’s experiences in its final report and propose recommendations to repair the harms they suffered.

“We do not want the TRRC's final report and recommendations to end up like those of the Janneh Commission [which investigated corrupt financial dealings of public and private entities during the dictatorship and whose recommendations have yet to be implemented],” explained Awa Njie, a woman victim from the rural town of Farafenni, located some 122 miles from the capital Banjul. “We, the women [victims], are suffering and we need justice and non-repetition of the violations meted out to us.”

This partnership resulted in a position paper on the inclusion of women that was submitted to Gambian institutions including the Ministry of Justice, Ministry of Gender, Children, and Social Welfare, the National Human Rights Commission, and TRRC, among others. Fatima Zahra Badjie, a project manager at Think Young Women, one of the local organizations involved, stressed the importance of this work. “The women’s position paper shows how the stakeholders are committed to fight for justice and reparations for the victims,” she said.

To expand the TRRC’s outreach to victims, ICTJ helped organize a consultation tour around the country. It also convened workshops for members of civil society on regulations related to reparations in October 2019 and January 2020. A broad cross-section of civil society representatives and victims, including persons with disabilities and women from rural regions, attended the workshops.

Together with the TRRC and other partners, ICTJ also raised awareness about the Gambia’s transitional justice process among young people, whose early participation in the process had lagged. ICTJ collaborated with the artist collective Our Nation Our Voice to engage young Gambians through music, poetry, and art. The artists toured the country in a caravan for 11 days in February 2019 to spark conversation about the ongoing transitional justice process and encourage youth to participate in it. Stopping in towns and villages along the way, the artists performed music and read poetry tacking themes related to transitional justice before local crowds of young people. Later that year, a documentary film about the caravan was premiered at the youth monument in the heart of Banjul. The collective also released a compilation album. In March 2021, ICTJ organized a poetry contest for students and young poets as a platform for them to present their work and express their views on and expectations of the transitional justice process.

ICTJ sponsored a series televised panel discussions on the importance of including women in the truth-seeking process. Members of the TRRC and representatives from Think Young Women, the Women’s Association for Victim Empowerment, and other women’s civil society groups actively participated in these panel discussions. The televised discussions, which aired in homes across the Gambia, shined a spotlight women’s experiences during the dictatorship and gave victims a human face. They helped raise awareness about their needs and rights and the potential for the TRRC to acknowledge and repair the harms they suffered.

ICTJ also partnered with journalists registered with the Gambia Press Union to produce more than 15 written articles on women victims in the Gambia. Gambian online and print newspapers published most of these stories.

In cooperation with the TRRC, ICTJ helped increase the participation of women in the process despite the numerous challenges they face and ensure that the process considered their experiences, needs, and rights. Moreover, it brought public attention to the TRRC and raised awareness about the past violations and their lasting consequences on victims, especially women victims.

The TRRC recognized this immense contribution at a ceremony, presenting ICTJ and four partners with awards. The event was held just as the TRRC was preparing to release its final report. “The commission would not have been a success without the support of these five partners, especially the ICTJ,” the TRRC Vice Chairperson Adelaide Sosseh said at the ceremony. “The TRRC thanks you for your valuable assistance especially much needed technical assistance.”

Gambians now eagerly await the public release of the TRRC’s final report and recommendations, including for prosecutions of the most responsible actors, reparations for victims, and institutional reforms. It is anticipated that the report and recommendations will emphasize long unaddressed root causes of violence and taboo issues, notably SGBV. Many also expect the report will recommend fair and meaningful reparations for victims as well as strong measures for the non-repetition of human rights violations.

However, as the TRRC approaches the end of its mandate, there are growing concerns, especially among victims, about what institution will take over the mantle, and with what resources. The implementation of the TRRC’s recommendations will likely feature prominently in the political debates leading up to the presidential election in December 2021. But no matter what the months ahead bring, ICTJ remains committed to the transitional justice process and to supporting its partners in civil society and in the Gambia’s relevant institutions in their efforts to ensure victims receive acknowledgment and redress, to prevent a recurrence of violence and repression, and to build a more inclusive and democratic future.

PHOTO: On July 13, 2021, the Gambia’s Truth, Reconciliation and Reparations Commission presented an award to ICTJ and four other organizations, for sustained support of the commission and commitment to the country’s transitional justice process. (ICTJ)