ICTJ welcomes the historic passage of the Draft Organic Law on the Organization of Transitional Justice Foundations and Area of Competence by the Tunisian National Constituent Assembly (NCA). In a nearly unanimous vote on Sunday, 125 of 126 deputies voted in favor of the law. 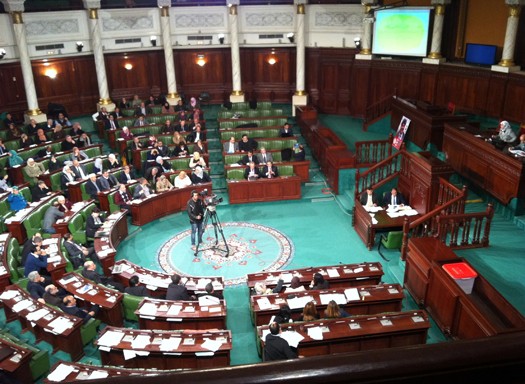 Tunis, December 17, 2013 – The International Center for Transitional Justice (ICTJ) welcomes the historic passage of the Draft Organic Law on the Organization of Transitional Justice Foundations and Area of Competence by the Tunisian National Constituent Assembly (NCA). In a nearly unanimous vote on Sunday, 125 of 126 deputies present voted in favor of the law. The law represents an important development in Tunisia’s transition to democracy.

While criticized as moving too slowly in some quarters, the NCA’s ability to pass the law indicates that Tunisia’s broadly peaceful revolution is still on track, despite difficulties and tensions. The Ministry for Human Rights and Transitional Justice deserves credit for its management of the process over two years, and the role of civil society should not be overlooked.

“This is a significant step for Tunisia,” said David Tolbert, president of ICTJ. “No one underestimates the challenges involved in steering this bill through the NCA. Nor should anyone underestimate how difficult the next steps will be in implementing what, by any measure, is an ambitious program. Passing the law was groundbreaking, but the hard work starts now.”

From 1987 to 2011, Tunisia was under the rule of Zine el Abidine Ben Ali, whose government maintained power through oppressive security policies designed to quell opposition. Reports indicate that, under the regime, there were several thousand cases of detention based often on persecution of political and religious views and abuse and torture of prisoners while in detention, along with systemic corruption and economic marginalization.

The transitional justice law sets out a comprehensive approach to addressing past human rights abuses. It creates a Truth and Dignity Commission and addresses reparations, accountability, institutional reform, vetting, and national reconciliation. It also creates a Fund for the Dignity and Rehabilitation of Victims of Tyranny” (article 41) and special chambers with trained judges to deal with cases of human rights violations. Violations against women and children are at the core of issues to be addressed by the Truth and Dignity Commission.

A National Dialogue on Transitional Justice was launched on April 14, 2012, to ensure broad consultation with various groups in the country on the best approach to dealing with the legacy of the Ben Ali dictatorship. After a series of consultations with civil society organizations and political parties, a technical committee was created to supervise consultations and draft a transitional justice law to be submitted to the NCA. The committee, composed of twelve members (10 representatives of civil society organizations working on transitional justice and two representatives of the Ministry of Human Rights and Transitional Justice), led a participative consultation process and significantly helped in incorporating victims’ visions and expectations for a Tunisian model of transitional justice.

“The consultation process was key to making this law a reflection of a diversity of voices in Tunisia on how best to address past abuses,” said Rim El Gantri, head of ICTJ’s office in Tunisia. “ICTJ is proud to have been able to contribute to this momentous effort through our expertise and lessons learned in other contexts.”

The draft law was submitted to the NCA Speaker in January 2013. After months of discussions, NCA committees submitted their analysis and amendments to the draft law, which was ultimately passed on December 15, 2013.

The International Center for Transitional Justice works to redress and prevent the most severe violations of human rights by confronting legacies of mass abuse. ICTJ seeks holistic solutions to promote accountability and create just and peaceful societies. For more information, visit www.ictj.org