International Fight Against Impunity Starts with the Responsibility of States 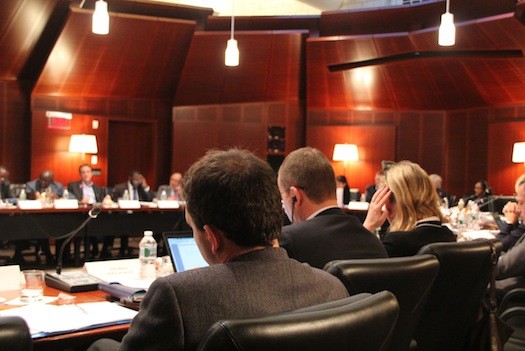 When perpetrators of serious international crimes are brought to justice by the country in which they committed their crimes, it signals a strong commitment to accountability and the rule of law.

To ensure that domestic investigations and prosecutions occur for serious crimes such as genocide and crimes against humanity, the need for international assistance goes beyond the walls of the courtroom: development agencies and rule of law actors can provide countries with essential support to fairly and effectively prosecute serious international crimes in their own courts.

This recognition was at the core of discussions at the third Greentree Conference on Complementarity, held October 25 and 26, at the Greentree Estate in Manhasset, New York.

The synthesis report from the conference is available here.

The conference brought together representatives from the international justice, rule of law, and development sectors to examine the needs and challenges of individual states prosecuting international crimes. The experiences of four countries - Colombia, the Democratic Republic of the Congo, Guatemala and Ivory Coast - helped to focus the dialogue.

In his remarks, ICTJ President David Tolbert reflected on the ongoing development of “complementarity,” a principle that governs the relation between the International Criminal Court and states in the effort to enhance domestic judicial capacity to try perpetrators of war crimes, crimes against humanity, and genocide.

“At the Rome Statute’s heart is a fight against impunity, and the key element in the Statute’s strategy is that states carry out their responsibilities to investigate and prosecute crimes proscribed by the Statute.”

Tolbert underscored the necessity of such a dialogue. “Those on the international justice side do not have either the resources or capacity to provide the support for training of judges, prosecutors, or registry personnel who are needed for domestic systems to begin to meet their duties,” he said. “Neither do they have the capability to build court management systems, develop witness protection programs, or create appropriate detention facilities and prisons – just to name a few of the steps required to ensure that serious crimes are properly prosecuted and tried.”

The Greentree participants also identified the importance of accurate needs assessments and the complexities surrounding gathering political support for some prosecutions. The meeting was led by ICTJ, supported by UNDP, and hosted by the governments of Denmark and South Africa.

In the coming months, ICTJ will release a series of articles and podcasts offering in-depth looks at national prosecutions in four countries: Colombia, the Democratic Republic of the Congo, Guatemala, and Ivory Coast. These features will present the experiences and viewpoints of government actors and experts working on the front lines to strengthen domestic judicial capacity in their countries. They will also consider the challenges and needs faced in these four unique transitional contexts.