Ivorian Youth Find New Ways to Be Heard on Truth, Justice, and the Future of Their Country

A new youth coalition has announced they will act as advocates for the rights of their fellow young Ivorians, and tell a new history of the violence that has so far been silent. 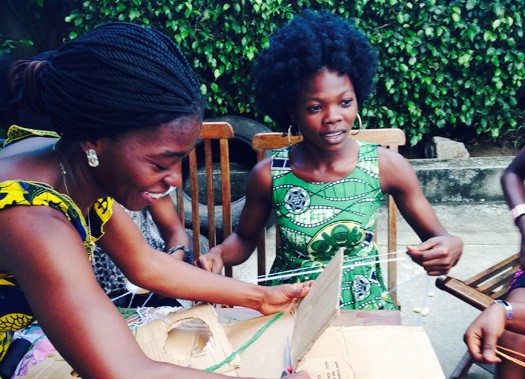 Midst hand-wringing and political jockeying over Cote d’Ivoire’s 2015 presidential elections, a group of young activists are determined to prevent the past from playing out on repeat: a new coalition called the Justice and Peace Action Network (le réseau Action justice et paix) has announced they will act as advocates for the rights of their fellow young Ivorians, and tell a new history of the violence that has so far been silent.

While Ivorians now live in relative peace, the havoc wrought upon the country by the 2010 crisis has left its mark: ethnic and political tensions still simmer, due in large part to the fact that those harmed or displaced from the 2010 upheaval have yet to see the government deliver the justice or reparation they are owed.

Transitional justice mechanisms—such as a truth commission (Commission Dialogue, Vérité et Réconciliation, or CDVR)—have so far been unable to deliver on their mandates, and efforts to investigate perpetrators of the election violence have lacked necessary political support be put into motion.

Today, with the next presidential elections only a year away, the nation—and the world—seem to already be bracing for the possibility of violence: the United Nations and others have taken their cue to warn that without taking proper precautions, the country could once again backslide into violence.

Conscious of this, and determined to tell their side of the story, the youth activists of the Justice and Peace Action Network presented their own radio report that reflects the experiences and impressions of young persons during and after the crisis, to demonstrate long-term consequences of patterns of violence that targeted children and youth.

The young leaders organized dialogues within their own organizations and gathered views about the past conflict and enduring obstacles to peace. Once the youth collected testimonies from their peers they met to determine the outline and format of their truth-seeking report. Prior to the report’s release, they announced the formal establishment of the Justice and Peace Action Network.

Before joining the coalition, Amandine, 23, was already an activist for child rights through l’AJUMED (Association des Jeunes et Enfants Unis pour la Médiatisation des Droits de l’Enfant). She sees her involvement with the coalition as an extension of work she is already doing towards the rights of children.

“The project on transitional justice allows youth to be a part of the process to bring a lasting peace to CDI. I saw in this project a good opportunity to better defend the rights of children in my country,” she said. For her, the role of the network in post-conflict CDI is clear: “My hope is that as Ivorian youth, we distinguish ourselves from politicians, since it is politics that destroyed our country.”

Today, no longer a combatant, Adama has been an active participant in the youth network since early discussions convened by ICTJ and UNICEF. He says the group has given youth a space to share their experiences with each other, their communities, and society as a whole.

At the launch event in Abidjan, the group presented excerpts of the audio report interspersed with spoken word and a rap about peace and justice, written and performed by two of the network’s members. The evening ended on a high note with a special concert with Kajeem, a famous musician in Cote d’Ivoire.

Following the launch the network plans to take their audio report out to communities across the country and host dialogues about the themes and questions raised in their work. Primarily, the network says it hopes the report will reach younger generations, like themselves.

The audio report, comprised of four short radio programs, reflects on several themes, including: the root causes of youth involvement in the crisis, notably poverty, fanaticism and ethnic mobilization; the school system and the risk to students during the crisis; individual stories of violence and loss; children and youth associated with armed forces; the consequences for children and youth of the crisis.

“The Justice and Peace Action Network is comprised of dynamic young people who are committed to their country’s transition from conflict,” said Virginie Ladisch, director of ICTJ’s Children and Youth Program. “Ahead of the 2015 elections, their perspectives are ones that the country cannot afford to ignore.”

Children and youth continue to be at the center of cyclical violence experienced during the years since the end of one party rule in Cote d’Ivoire. Many of the root causes of youth involvement in the last crisis are felt just as strongly today as they were prior to the 2010 elections: unemployment is high, economic prospects dire, and these grievances are now compounded by anger at the injustices endured by the young people who were victims of the crisis.

“Cultural norms in Cote d’Ivoire discourage young people from speaking before elders and authorities,” said Didier Gbery, Program Associate with ICTJ’s program in Cote d’Ivoire. “Frequently, young people are frustrated that they are left without open channels of communication to reach the government. We recognized that these youth had a lot to say, and wanted to find a way to help their voices be heard.”

The seeds of the Justice and Peace Action Network were planted from several months of dialogue between youth leaders—convened by ICTJ and UNIECF—to discuss the role of children and youth in the country’s transition. When the CDVR process was stalled for political reasons in the fall of 2013, UNICEF and ICTJ brought together youth representatives of 14 different organizations interested in truth seeking and peacebuilding work. With the support of UNICEF and ICTJ, the youth leaders received training on the basic principles of peacebuilding and transitional justice, with a particular focus on truth seeking and dialogue.

As the Network carries on its work, ICTJ will continue to offer its support. The group’s many ideas for the future include a weekly radio show, and the production of a graphic novel aimed to spark discussions in classrooms.

Meanwhile, as the country looks ahead to the next presidential elections, the voices of these young Ivorians are being taken to every corner of the country. Adama remarks that even if the network cannot prevent the recurrence of conflict, he believes it will prevent youth from participating in violence during the upcoming election.