Justice and Development: Nexus at the Heart of Arab Spring 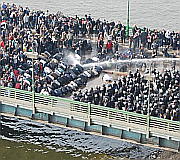 “Egyptians are not only after food, they want the full rights that they have struggled for,” said Ziad Abdel Tawab, deputy director of the Cairo Institute for Human Rights, at this week’s conference in Cairo about the challenges and opportunities for transitional justice in the Middle East and North Africa. His assertion was directed at the trend in which trials of key figures from former president Hosni Mubarak’s regime have mainly focused on corruption charges and largely ignored human rights violations. This, Tawab insisted, was the military’s attempt to show that the revolution in Egypt was about corruption and not much else.

In contrast to Tawab’s call for justice to be an integral element of the transition from dictatorship to democracy, some respected analysts have maintained that the people of the region need development first and that justice should come later.

In an extended analysis of the aftermath of Mubarak’s downfall published in April, David Reiff writes: “The most relevant fact for the majority of the inhabitants of countries like Egypt and Tunisia is not that they have been governed by tyrants but that they live in crushing poverty…that has grown progressively worse for at least the bottom two deciles of the population over the past 20 years. Abolishing Mubarak's party, confiscating its funds, and even putting him, his sons, and his cronies on trial will literally do nothing to alleviate this.”

Reiff argues that if the Arab democracy activists and their supporters do not put jobs and health care at the center of their approach—attaching at least as much importance to these as political reform and justice—the revolutionary spirit of the Arab Spring will be replaced by discontent.

Variants of this line of thought also run in the opposite direction: “Let justice be done, even if the sky falls.” Justice promoters have had little to say about stability and development, perhaps protected by the purity of the defense of justice.

It is not by mere coincidence that thwarted development, insecurity and injustice frequently occur together, says ICTJ Director of Research, Pablo de Greiff. “Tyranny and profiteering have been historical bedfellows, as the frozen bank accounts of Ben Ali and Mubarak clearly demonstrate. In the region, however, the combination of education, communication, and demographics made the partnership particularly obnoxious.”

De Greiff asserts that security, justice and development are closely related. “The World Bank, in its last World Development Report on Conflict, Security, and Development, has caught up with this view. It insists that the way to avoid conflict or to emerge from it depends not just on security, not just on jobs and not merely on justice, but in making gains on all three fronts.”

Recognizing the need to further explore the links between justice and development in the context of historic changes sweeping the Arab world, ICTJ and the Center for Human Rights and Global Justice at the New York University School of Law have focused this year’s annual Emilio Mignone Lecture on Transitional Justice on the dilemmas presented here.

Hossam Bahgat, chairman of the Egyptian Initiative for Personal Rights and one of prominent leaders of the popular revolution in Egypt, and Helen Clark, head of United Nations Development Program, and will participate in a lecture that traditionally brings leading international figures to explore cutting edge issues in transitional justice.

“Justice and Development: Nexus at the Heart of Arab Spring”, Annual Emilio Mignone Lecture on Transitional Justice is scheduled for November 14, 2011, from 6:00pm-7:30pm at the Tishman Auditorium of Vanderbilt Hall, 40 Washington Square South, in New York, N.Y. Please RSVP to Audrey Watne at watnea@exchange.law.nyu.edu.