The role of police in society is to protect residents and enforce the rule of law. As a public institution, and particularly one whose function includes the state-sanctioned use of force, the effectiveness of the police depends on its integrity and legitimacy. When the police abuses its power, by brutalizing civilians and or engaging in corruption, it loses its credibility and the public’s trust. In Kenya, enforcement of measures to halt the spread of COVID-19 have been accompanied by acts of police brutality, of the kind that Kenyans have been through multiple times before. 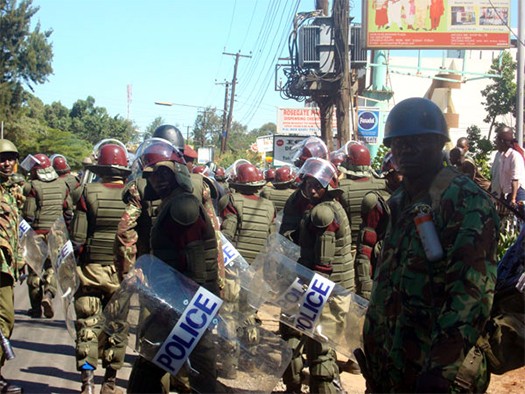 The role of police in society is to protect residents and enforce the rule of law. As a public institution, and particularly one whose function includes the state-sanctioned use of force, the effectiveness of the police depends on its integrity and legitimacy. When the police abuses its power, by brutalizing civilians and or engaging in corruption, it loses its credibility and the public’s trust.

Serious police misconduct often occurs in countries experiencing and emerging from violent conflict and repression, but it is also a problem in well-established democracies and countries at peace. Police violence against Black people in the United States, for example, has recently provoked massive protests to demand change, illustrating the widespread need for police reform in countries around the world.

COVID-19 has, in ways, reinforced this need. In the United States, the structural inequality and racism that have made communities of color disproportionately susceptible to the ravages of the pandemic are the same that allow for police to target and mistreat their members. Other governments around the world have enacted broad measures to stem the spread of the virus, many of which they rely on the police to enforce, often leading to abuses against already marginalized groups.

In Kenya, this enforcement has been accompanied by acts of police brutality, of the kind that many Kenyans have been through multiple times before. Within hours of declaring a dawn-to-dusk curfew and other safety directives, police began applying these directives with unwarranted use of force that have left scores seriously injured, and others dead. Youth in informal settlements and rural areas have, as always, borne the brunt of the police misconduct.

While the Independent Policing Oversight Authority has launched an investigation of the individual police officers implicated in the abuse, the Office of the President and the Cabinet Secretary in charge should—but have yet to—take decisive action. Indeed, seven years after the report of the Truth Justice and Reconciliation Commission identified the police as one of the biggest violators of human rights, the majority of Kenyans remain afraid of the police.

For decades, Kenya’s police service has been associated with human rights violations and other misconduct, intent mainly on protecting the interests of the politically powerful rather than the general public and the communities they are meant to serve. The police have been a tool for state-sponsored violence, often exhibiting disregard for the rule of law and committing abuses including arbitrary arrests, enforced disappearances, ill treatment and torture, extrajudicial killings, suppression of protestors, lethal use of force, sexual violence and corruption.

The police vetting process in Kenya was part of a comprehensive police reform program that began in 2013, triggered by the country’s post-electoral violence in 2007-2008. Unfortunately, these efforts have not been able to entrench a culture of respect for human rights among officers or establish a permanent mechanism for accountability.

Kenya’s 2010 constitution anchors police reform in that it stipulates that the institution must protect Kenyans’ fundamental rights and freedoms. In 2012, the National Police Service Commission (NPSC) was mandated to screen every officer in the Kenyan police service for misconduct including corruption. Initially welcomed by the public and civil society as a mechanism that could change the policing culture and prevent further violations, the process was halted in 2019. By then, civil society’s optimism had turned to disillusionment and its representatives generally agree that the vetting process failed.

The Van Vollenhoven Institute at Leiden Law School and the International Center for Transitional Justice recently conducted research on police vetting in Kenya and have now published a report, briefing paper, and policy brief that shed light on why such reforms have been unsuccessful. As the new report explains, civil society’s disappointment can be attributed in part to the outcomes of the vetting. While the NPSC did dismiss three out of the seven highest-ranking police commanders, it vetted only 5,993 out of the estimated 80,000 active duty officers, of which 445 were found unsuitable and dismissed. Some were later reinstated after a review.

However, it was the vetting process itself that most disappointed civil society. In particular, civil society organizations reported a lack of responsiveness on the part of the NPSC to their concerns, including limited transparency and accountability for controversial decisions.

Tasked with upholding the rule of law as enshrined in the constitution, it is only after the police start adhering to constitutional principles, including equal protection under the law to all, that Kenyans will trust the police and embrace its role in safeguarding the peace and security of their communities. Kenya’s experience suggests that a vetting process that prioritizes a strategic approach, clear rules and guidelines, internal review mechanisms, and a strong base of information, and that receives broad political and material support, can and should be an important element of any police reform.