In the Philippines, Understanding Victims’ Perceptions of Reparations Forms

To mark the launch of our new publication, "Forms of Justice: A Guide to Designing Reparations Application Forms and Registration Processes for Victims of Human Rights Violations", we sat down with Karl Gaspar to talk about his experience participating in the reparations process as a victim in the Philippines. 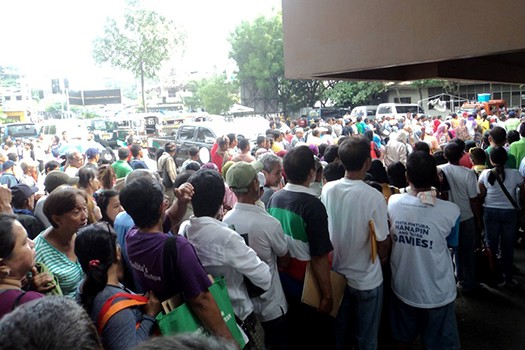 To mark the launch of our new publication, Forms of Justice: A Guide to Designing Reparations Application Forms and Registration Processes for Victims of Human Rights Violations, we sat down with practitioners and victims alike to get their insight into processes around the world. Read on for our conversation with Karl Gaspar about his experience completing reparations forms as a victim in the Philippines in 2014, and click here to learn more about Jairo Rivas about his work in designing reparations forms in Peru and Colombia.

In August 2014, Karl Gaspar approached Almendras Gym in Davao City, paperwork in tow, ready to talk about the past. Gaspar, a victim of Ferdinand Marcos’ regime, was far from alone: thousands of survivors crowded outside the gym, prepared to complete the forms necessary to apply for state reparations.

The application process in the Philippines had to accommodate all of these stories in a way that was respectful to victims while also managing to systematically translate these testimonies into reparations awards. What does this process look like to victims? As ICTJ’s latest paper examines the role of reparations forms, ICTJ’s Sam McCann sat down with Gaspar to discuss the registration process and whether he feels a measure of justice has been served.

You first attempted to register in Davao City – what made you come out that day?

Karl: I came out because I was convinced that by doing this, once more, I as an ex-political prisoner could help raise awareness that indeed Ferdinand Marcos committed atrocious human rights violations. Another minor reason was I wanted to be able to see once again the people who I met in prison, as we rarely meet these days.

You previously wrote about how it took hours in line to reach the “inner sanctum” of the registry – the place where you would actually be able to fill out the reparations forms – after hours in line. What happened when you finally had the opportunity to fill out the forms?

Karl: I was very much relieved when I was finally able to enter the inner sanctum because outside it was all very topsy-turvy with no order in terms of the whole process, of who will be entertained first, and it was all very frustrating. But once inside, things seemed more orderly and systematic. In fact, I was impressed at the manner that the gym was set up to make sure the flow of applications would be smooth.

My only disappointment was that the staff who handled the interviews or did all the technical work of entering data into computers were all very young. They seemed like college students who I suspected had no idea what happened during martial rule and were there only because they had the basic skill and were paid for their labor. But generally, we were treated well, thus the process did not take too much time.

Tell me about the forms you had to complete. What questions were asked? Were any questions challenging to answer, either from an emotional or factual standpoint?

Karl: Questions were basically the usual ones, like those asked by the [Robert] Swift staff: who I was, why was I arrested, how long I stayed in prison, etc. All those standard sort of questions. The forms were not demanding in terms of data being asked, partly because I came prepared with all the documents I needed to be able to respond to the questions. This was possible because I had the documents with me that were used in the Swift procedures. So I had no problems remembering accurate data. I have also done a lot of emotional processing in the past, and have talked and wrote about my prison experiences, so I did not have to deal with the residue of trauma.

Who filled out the form – you or the administrator?

Karl: I filled out the form myself.

What did you think of the form itself? What would you change about it?

Karl: I really cannot recall anymore the details of the forms that we had to fill up. But I didn't think there were major problems with the form. I also realized that considering the thousands of would-be applicants, the organizers wanted to make sure there weren't too much data to process.

Did you receive the reparations you applied for since that day you lined up? If so, how do you feel?

Karl: Yes, I already received the reparations but was told they could only issue the partial amount (I am not even sure if this is correct). My only complaint was that the whole process of issuing the funds assumed a lot in terms of familiarity with back procedures and computer system. I am not familiar with such systems, as I do not do too much banking. Fortunately, when I complained to the bank manager that I found it very difficult to withdraw the funds, she assigned a staff person to help me go through the process, which then made it possible for me to get the cash.

Were you able to meet up with the people you met in prison when filling out the forms? What did they think about the registration process?

Karl: Perhaps of the close to a hundred detainees that I was with during my years in prison, there were around 20 of them who I met during the registration process. But I almost met friends who were political prisoners before and after our time. We were all complaining about how difficult the process to get inside the gym was, how disorganized the outside area was and how it created so much inconvenience that one wondered whether it was worth going to all that trouble. A few even commented: "Is this how ex-political prisoners are treated after what we went true?  It is like being tortured all over again..." However, they agreed that the process inside the gym, where the forms were actually completed, was much better organized and orderly.

A few of use also wondered if those who resided in the hinterlands were reached, as these were our fellow detainees who we were not able to meet.

In your prior writing, you have stressed the symbolic value of recording the violations of the Marcos regime, saying it helped you overcome the daunting lines much more so than the monetary incentive. Can you elaborate on that?

Karl: More than the money, both the Swift initiative and the second attempt at reparations was very much welcome because of its symbolic value. Even until today, the Marcos family and all the loyalists supportive of the Marcos family (and sadly, a big percentage of our millennials) are in denial regarding the extent of human rights violations committed during the Marcos dictatorial era. That these cases made it to the courts and won were very important symbolic victories for us who were victimized. Of course, the money is also very much appreciated, even if the amount will never compensate for what we went through.  For some victims who desperately need monetary assistance, the funds that were released to them were put in good use.

Do you feel that the reparations a state offers should not only take into account what violations a victim experienced, but also the social and economic circumstances of the person receiving reparations? Or should it be the same across victims of the same violations, regardless of their circumstance?

Karl: I felt strongly that it should not have been the same across all victims, regardless of circumstances. There should have been greater effort at making more nuanced categories in terms of these circumstances as well as the extent of harm inflicted upon the victims. A person who was in prison for one year and did not suffer through physical torture certainly cannot and should not be categorized in the same level as a woman gang-raped by military men and who, after that, is also incarcerated.  Or between a prisoner who survived and one who got brutally assassinated.

What impact has entire process – applying, registering, receiving reparations – had on how non-victims remember the Marcos dictatorship?

Karl: There was hardly any media coverage of what took place just before, during and after the entire process. There was scant interest on the part of mass media. Even on social media, I do not think there were that many bloggers or netizens commenting on the process. So I doubt if it had any major impact on non-victims, especially the millennials. This was made clear during the first few months of the presidency of Duterte, who allowed the burial of Marcos in the heroes' cemetery. The only ones who publicly enraged were those who already knew about the abuses during that era.

Considering the process as a whole: do you feel heard? Do you feel a measure of justice was served?

Karl: In a way, I do feel that justice was served. My major complaint about the whole thing was just the process of getting the people to report to the place to file their application, and how that process here in Davao City was just so un-organized that all of us were really frustrated before reaching the inner sanctum. Waiting, standing in line for a whole day, not knowing if your ordeal will end… that was hard.  But beyond my own personal experience, there was also the whole problem of sending out information to those in the hinterlands that cannot be easily reached by both mass and social media. There were few provisions for those in the countryside, and most of those in remote areas were not reached. The distribution of funds also did not go very smoothly.