A complex law and ongoing violence are complicating efforts by the Colombian government to provide reparations to millions of victims of the country’s internal armed conflict, according to a new report by ICTJ. 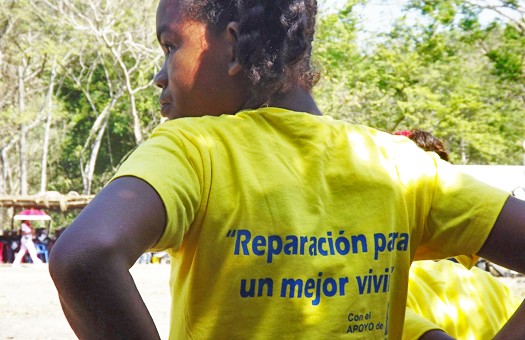 NEW YORK, October 19, 2015 — A complex law and ongoing violence are complicating efforts by the Colombian government to provide reparations to millions of victims of the country’s internal armed conflict, according to a new report by the International Center for Transitional Justice.

The 28-page report, titled, “From Principles to Practice: Challenges of Implementing Reparations for Massive Violations in Colombia,” examines the challenges of implementing Colombia's Victims and Land Restitution Law (2011), which created a large-scale reparations program for victims of serious human rights violations and a separate land restitution program for those displaced from land they relied on for their livelihoods.

The most significant challenge is the sheer number of claims. The program has registered more than 7.6 million victims, most of whom suffered forced displacement, as well as 260,000 killings and 45,000 enforced disappearances. Under the law, victims of certain violations are eligible for one-time cash payments and assistance such as psychosocial support and exemption from military service for young men.

Even though the government has allocated a significant sum to pay for the program, it is unclear whether it will meet all victims’ needs.

“Ambitious reparations policies that try to meet every international standard and withstand rigid constitutional interpretation, but which fail to assess the real capacity for putting principles into action, can be difficult to implement and budget for,” said Cristián Correa, author of the report and ICTJ’s Senior Associate for Reparative Justice.

The report stresses that simplicity and practicality are essential to implementing an effective reparations policy on a large scale, as in Colombia.

Massive poverty and stark inequality in the country have also made designing an effective reparations program more challenging. It is estimated that 80 percent of victims live in poverty and 35.5 percent live in extreme poverty, figures almost triple the country’s average poverty rates.

For Colombia’s reparations program to make a tangible difference for victims, the government needs to adopt socioeconomic policies that improve the quality of life of most Colombians. This means job creation and a stronger commitment to health care, education, and housing, as guaranteed by the Colombian constitution.

“If the government provided health care and education to all victims, their ability to use compensation for significant investments, instead of basic services, would naturally increase,” said Correa.

The report also states that the lack of a clear acknowledgement on the part of the state that these subsidies and services are a response to wrongdoing makes it difficult from them to be considered truly reparative.

“The message that accompanies reparations must be clear for them to have a true reparative effect,” said Correa. “Indeed, acknowledgment of responsibility is the main difference between a humanitarian assistance program and a reparations program.”

According to the report, while efforts like personalized letters to victims from the state expressing remorse are meaningful and help to show victims that their rights are taken seriously, they do not go far enough in expressly acknowledging state responsibility.

“Implementing reparations under the Victims’ Law provides very important lessons for the country for carrying out commitments that are now being discussed by negotiators in Havana,” added Correa.

PHOTO: Young participant at an event commemorating the 12th anniversary of a massacre committed by paramilitaries in Mampuján, Bolívar, in 1990. (Rosángela Roncallo/ICTJ)