After toppling Hosni Mubarak’s dictatorship in February 2011, Egyptians were eager for a reckoning with past injustices. But after years of political turmoil, the possibility of a genuine transitional justice process in Egypt is uncertain. We turned to three leading Egyptian activists to examine if there really is a chance for justice and reform in Egypt in the near future. 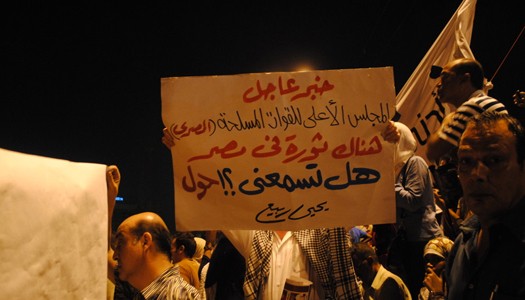 After toppling Hosni Mubarak’s dictatorship in February 2011, Egyptians were eager for a reckoning with past injustices. The slogan of the revolution that brought millions into the streets and Tahrir square was reflective of this sentiment: “Bread. Freedom. Social justice.” The energy from the streets was channeled into discussions on the country’s future. At a regional conference on transitional justice organized by ICTJ in Cairo in October of that year, the discussion was auspicious and animate. Accountability and institutional reforms were at the top on the political debate. Today, the hopes and optimism of those days seem like a distant dream. After four years of political turmoil, the possibility of a genuine transitional justice process in Egypt is uncertain.

Parliamentary elections are set for October, after which newly elected representatives will likely draft a transitional justice law, as set forth by Egypt’s 2013 constitution. But with ongoing rights violations, new repressive laws, and a polarized political atmosphere, we turned to three leading Egyptian activists to examine if there really is a chance for justice and reform in Egypt in the near future.

Although Mubarak and his associates were arrested under public pressure shortly after the 2011 revolution, Egypt's judicial system failed to hold anyone accountable for the killings and other abuses committee during the 2011 popular uprising. Accountability for human rights violations committed during the dictatorship was not on the agenda, even after the election of the Muslim Brotherhood's Mohamed Morsi as president in 2012.

It seemed that some progress was possible on other measures, such as truth-seeking and reparations but the public discontent with Morsi and his government nearly paralyzed the process. In July 2013, the army intervened and forced Morsi to step down, appointing an interim government after millions of Egyptians took to the street calling for Muslim Brotherhood to relinquish power.

The transitional justice process stumbled not only due to the polarized political environment that followed Morsi's ouster, but because of the gravity of the abuses committed by the new government. Most notably, over 800 Morsi supporters gathering in Rab'a Square were killed by state security forces—the largest single massacre in modern Egyptian history. Ironically, the Rab'a massacre occurred at the same time that the interim government took what, in principle, was a positive step by establishing the Ministry of Transitional Justice.

Emad Mubarak, a 38 year-old lawyer and the executive director of the Association for Freedom of Thought and Expression (AFTE)—a Cairo-based association that works on monitoring, documentation, and legal support, with a specific focus on the right to know and the student movement—argued that the lack of accountability for crimes like the Rab'a massacre has fomented hatred and division in Egyptian society, contributing to a state of tension that is unconducive to pursuing truth and accountability, or crucial institutional reforms.

Continued impunity also risks undermining public faith in institutions that would be needed for any transitional justice process to be successful. Additional actions, including the exoneration of Mubarak, mass death sentences handed down against some 600 people, and the imprisoning of hundreds of activists and at least 18 journalists, have all contributed to a loss of confidence in the government.

Karim Medhat is a researcher on security-sector reform at the Egyptian Initiative for Personal Rights (EIPR). Medhat said that Egyptians see on a daily basis different ways in which judges, police officers, and other state officials operate in an environment of complete and unabashed impunity.

“Legal institutions in particular have reached a state of unprecedented decay since the summer of 2013,” said Medhat.

The credibility of those institutions needs to be rebuilt in order for any trials or truth-seeking processes to have real meaning for Egyptians.

While the Rab'a massacre re-established accountability as a priority for many Egyptians, a series of repressive laws passed by the government of new President Abdel Fatah al-Sisi restricts Egyptians’ ability to voice their concerns. Following al-Sisi’s election, the government cracked down on independent NGOs, beginning with an organizing law that gives the state the power to dissolve groups that “threaten national unity.” A new Anti-Terrorism Law further cemented the government’s grip over any dissident voices by setting fines of up to USD $63,000 for journalists who stray from official government statements or publish “false” reports concerning government operations against armed groups.

“The anti-terror law can potentially affect transitional justice because it shrinks the political and legal space in which civil society, NGOs, and activists can participate in political work and advocacy and can call for accountability,” said Medhat.

Government repression casts a shadow over parliamentary efforts to enact a transitional justice law—a crucial step if Egyptians are going to see justice for past abuses done. Under Egypt’s 2013 constitution, parliament is required to pass a law “that ensures revealing the truth, accountability, proposing frameworks for national reconciliation, and compensating victims, in accordance with international standards.” that the ambiguous phrasing of the provision leaves many questions about the time period and nature of the violations that will be investigated, as well as the status of the victims.

Transitional Justice Minister Ibrahim Huneidi has readied a draft bill, but must wait until after October elections for parliament to act on it. There is no telling whether the new parliament will adapt his draft or start from scratch.

Medhat is wary of anything related to transitional justice that the next parliament might enact into law. With Egypt’s restrictions on free speech and extreme political polarization, any potential law would likely ensure criminal accountability for one party only. “That's why I think advocacy for a transitional justice law in this context is not only futile but dangerous,” Medhat explained.

What Hope for the Future?

Ahmed Ragheb, a lawyer and founder of the National Community for Human Rights and Law, is more hopeful. He believes that the election of a new parliament, given the broad powers apportioned to it by the constitution, would be an opportunity to re-open the transitional justice debate in the public domain.

However, Ragheb, who served in 2012 as a member of the fact-finding committee formed by the then-President Morsi to investigate different abuses committed during 2011 revolution, acknowledges that the new parliament will face significant challenges. One major problem is the expected absence of political pluralism.

“It’s probably expected that supporters of the current regime would have the majority of seats, which would weaken the representation of other parts of society who might then question any legislation issued by this parliament,” Ragheb said.

The future of transitional justice in Egypt is, at best, in a deadlock. Medhat argued that this stems from the unfinished conflict between the authoritarian state and pro-democracy forces that began in 2011. Both Ragheb and Mubarak shared this view—the current climate simply does not provide fertile ground for a debate over transitional justice.

However, Ragheb and Mubarak highlighted the significance of documentation. Indeed, several independent initiatives, like Wikithawra, were launched after the 2011 revolution to document human rights violations under each government.

When Egypt is finally ready for its reckoning with the past, such documentation may prove invaluable.

PHOTO: A protestor in Tahrir Square in 2011 holds a sign reading, "Breaking news. To the (Egyptian) Supreme Council of the Armed Forces, There is a revolution in Egypt, do you hear me? Over." (Some rights reserved Lilian Wagdy/Flickr)