A new ICTJ report argues that discussions about a future return of refugees and coexistence among groups currently at war in Syria must begin now, even in the face of ongoing violence and displacement. 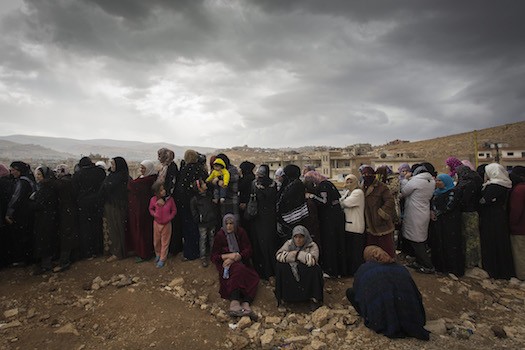 BEIRUT, June 6, 2017—A new report from the International Center for Transitional Justice argues that discussions about a future return of refugees and coexistence among groups currently at war in Syria must begin now, even in the face of ongoing violence and displacement. The report makes it clear that the restoration of refugees’ sense of dignity will be important to creating the necessary conditions for return and peaceful coexistence — and building a stable post-war Syria one day.

The 60-page research report, titled Not Without Dignity: Views of Syrian Refugees in Lebanon on Displacement, Conditions of Return, and Coexistence, is based on interviews with Syrian refugees living in Lebanon as well as organizations working on issues related to Syrian displacement in Lebanon and Turkey. It provides an important window into the experiences of refugees who fled to Lebanon and their concerns, expectations and priorities for one day returning to Syria and “living side by side” with people who may now be labeled their abusers and enemies, if and when the time comes.

Most Syrian refugees who were interviewed for the report want to return, to the homes and places where they used to live. But because of the war’s brutality and the fact that it has dragged on for so many years, overcoming divisions and rebuilding relationships, as well as reclaiming lands and property they once possessed, will be difficult.

“For refugees and internally displaced persons, one day rebuilding their lives and relationships back in Syria will be a long and complex process. Most of the refugees we spoke to recognized this,” said Rim El Gantri, co-author of the report and former ICTJ head of office in Tunisia and Nepal. “But when the return and rebuilding process does begin one day, it will be crucial that the experiences and views of victims, including refugees, be strongly taken into account.”

The study found that among Syrian refugees in Lebanon common priorities for return include: security, shelter, livelihoods, reconstruction of homes and infrastructure, restitution for loss of property, education for the young, psychosocial support and family reunification.

Views varied widely on the possibility of one day rebuilding relationships and coexisting peacefully with other groups back in Syria. Some believed that once the conflict ends, Syrians will be ready to rebuild ties, while others were less optimistic. A 35-year-old refugee from Homs shared: “I would give anything to go back and live together again. But my cousin is now a Salafi. Coexisting with him will be hard . . . Those like him have changed. We can’t live next to them anymore.”

The Importance of Dignity

Refugees’ sense of loss and their need to have their dignity (karama) restored was a common theme in interviews.

“Losing family members and homes, their difficult journeys from Syria and the daily humiliation and discrimination they face as refugees in Lebanon—these experiences have left people feeling like they have lost their dignity,” explains Karim El Mufti, co-author of the report and associate professor of international law and Director of the Human Rights Legal Clinic at the Law Faculty of La Sagesse University in Beirut.

“Dignity should be an important element of rebuilding relationships in post-war Syria, between people and groups. It should also be at the center of the reconstruction process linking citizens and the state.”

The dangers and losses that have forced Syrians to flee their homes in the first place, as well as the resulting justice claims, will likely have an important bearing on their ability to build, or rebuild, relationships in ways that help to prevent violence from happening again.

Still, many believe that criminal justice will be a distant option in post-war Syria, with some worried that criminal proceedings would renew tensions. Several took a religious point of view: “Justice will only come from God,” said a 47-year-old Syrian Palestinian refugee living in Ain El Helwe Palestinian Camp in southern Lebanon. He added, “We shall forgive because God can forgive. We want to live in peace.”

Others hope that those who took part in atrocities will be held criminally accountable, although most lack confidence in the Syrian judicial system and would prefer tribal courts, an Arab court or international institutions to carry out any prosecutions.

Young refugees may represent a hope for one day rebuilding relationships and increasing tolerance back in Syria after the war. Some have learned new skills in activism and conflict mediation from working with nonprofits and many have developed a new sense of openness toward people of different faiths, cultures and viewpoints — all of which will be useful to building a stable post-war Syria.

While acknowledging that any future return depends on first reaching a political resolution to the conflict, which may seem far off, the report makes several recommendations for steps that can be taken now to improve the possibility of peaceful coexistence in Syria someday. These include integrating the views of refugees on conditions of return and supporting local efforts that can help to restore refugees’ sense of dignity. Out of concern for particularly vulnerable groups, the report also calls for addressing women’s exploitation, greater educational assistance for children and an end to child marriage.

The research and report was funded by the UK Government’s Department for International Development.

PHOTO: Syrian refugees in Arsal, Lebanon, days before over 1,000 families escaped increasing fighting on the Syrian side of the border, November 2013. (M. Hofer/UNHCR)