In Wake of Dictatorship, Civil Society in Tunisia Prepares to Help Women Speak Their Truth

After emerging from its revolution with a new constitution and a comprehensive transitional justice law, Tunisia is setting into motion a process to learn the truth about the country’s time under repressive rule. 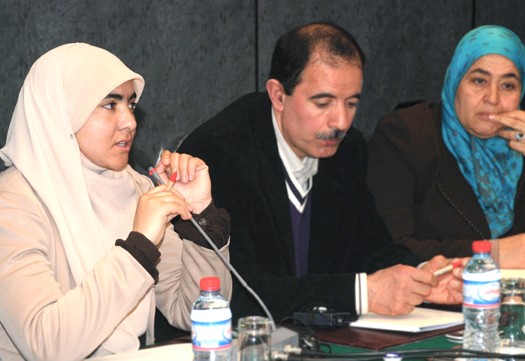 After emerging from its 2011 revolution with a new constitution and a comprehensive transitional justice law, Tunisia is setting into motion a process to learn the truth about the country’s time under repressive rule, including that of former President Zine El Abidine Ben Ali.

Tunisia’s truth commission, the Truth and Dignity Commission (TDC), has already taken its first steps: candidates for commissioners who have been proposed by a selection committed of MPs are being reviewed, and the commission is expected to begin its formal work soon.

The TDC is a product of the country’s new transitional justice law, the passing of which sent a strong signal that Tunisian society demands that truth and justice be at the forefront of its transition: aside from the creation of the TDC, the law established a reparations fund, a special chamber to address human rights violations, and a committee to vet public officials.

Expected to be the most public and participatory of Tunisia’s efforts to address the past, some Tunisians are focused on the question of how the TDC can work to ensure its vision of justice isn’t limited to the experiences, grievances, and justice demands of men: women who suffered either directly or indirectly from various forms of violations form a sizable percentage of victims in Tunisia, and are working to make sure their side of the story is told.

Tunisian civil society groups—particularly those working with women victims of abuses under the Ben Ali regime—demonstrated their active engagement during Tunisia’s national consultation and the drafting of the transitional justice law, where they were able to successfully lobby for the inclusion of women in the country’s plan forward. For example, the law creating the TDC incorporates gender-based criteria in the commissioner selection process, requiring that each gender be represented by at least one third of its members. Today, these groups are continuing to make their voices heard as the selection process takes place.

In recognition of the need for women’s experiences to be included and acknowledged in Tunisia’s truth-seeking process, ICTJ has offered training to Tunisian civil society and women’s groups who are advocating for a gender-sensitive commission.

Designed by ICTJ’s Gender Justice Program, four recent trainings held in Tunis, Nabeul, Sfax, and Sidi Bouzid brought together leaders in civil society to consider women’s role in truth-seeking. The trainings focused on the importance of Tunisia’s TDC for victims, emphasizing the critical role of civil society organizations engaging as mediators between the victims and the Commission, and the importance of documentation.

Monitoring and Advocating for Gender-sensitivity

At ICTJ’s trainings, Kelli Muddell, Director of ICTJ’s Gender Justice Program, explained that women’s experiences after conflict or dictatorship can often be blind spots for a truth commission. As such, any robust truth-seeking effort requires pressure from civil society to ensure the process does not alienate women, or prevent their participation altogether. Two-way communication between the TDC and women’s groups will be essential to ensure successful gender-based work, the engagement, and collaboration.

Lobbying by these groups can secure that gender-sensitive measures are taken by the commission. Muddell noted that truth commissions in Peru and Cote d’Ivoire have held “gender-blind” hearings; but in some cases, commissions choose to hold closed hearings to allow women to talk about the violations they suffered in a safe space.

Additionally, civil society advocacy has sometimes provided enough pressure to create a gender unit within the structure of the commission itself, which can be a significant step to ensure an inclusive truth-seeking process.

Salwa El Gantri, ICTJ Tunisia Program Associate remarked during the session she led that “engendering” the organizational structure of a truth commission—either through the establishment of a specialized gender unit or the adoption of a cross-cutting perspective for dealing with gender-related issues—can significantly contribute to women’s participation and experiences with the commission.

Under discussion at the trainings held by ICTJ were the various ways truth commissions can benefit from civil society organizations. Reports of sexual violations against women rarely see the light of day, thus leaving truth commissions with a heightened obligation towards those affected women.

El Gantri emphasized that in Tunisia, civil society actors will be essential to overcome the barriers that may stand between the commission and victims of gender-based violence: “The institutional openness towards women’s associations remains important to facilitate the TDC work with women victims and to establish trust with them so they come forward and testify. The TDC will gain a lot of time and effort building on what these associations have already done.”

The training also offered lessons from other contexts about the importance of documentation. The TDC has a large mandate and limited resources and time, and it would be essential to cooperate with CSOs on the patterns of the violations in order to shape its work plan and research areas of focus.

“Documentation processes play a crucial role in transitional contexts,” explained Shehzeen Saied, Program Associate in the Gender Justice Unit of ICTJ, who led sessions on documentation that included successful examples from Papua New Guinea and elsewhere. “They are precursors for a fair and effective transitional justice mechanism, even if the process hasn’t formally started yet.”

Tunisian NGOs can help the TDC to detail the types of victims it should reach out to, patterns of violations, and point out obstacles that it may encounters as it begins to invite victims to come forward.

Monitoring the TDC process through outreach and communication to the public is another key role of NGOs, as truth commissions may have limited resources. “The more the society knows about the TDC’s work, the greater the impact the TDC will have,” Muddell explained.

Watch a video of the training conducted by ICTJ in Tunisia to civil society and women’s groups who are advocating for a gender-sensitive commission.

PHOTO: Participants at the training in Tunis (Mohamed Tata/ICTJ)