In Negotiation of Women’s Rights after Revolution, MENA Activists Take Lessons from Tunisia 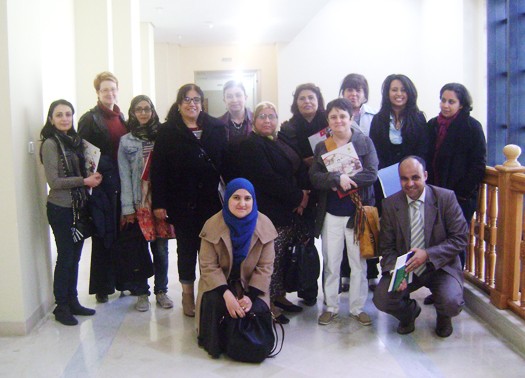 A brief look at the state of rights for women in post-revolution MENA countries shows clearly that revolutions that toppled authoritarian power in Tunisia, Egypt, and Yemen have so far yielded few victories for gender justice advocates.

This is cause for concern for Syrian activist Sabah el Hallak of the League of Syrian Women, one of seven activists who participated in the recent ICTJ’s week-long transitional justice immersion training in Tunisia.

“We need to prepare ourselves for the important role that we as women can play, so every step we take in the transition ensures women’s participation towards the realization of their rights.”

The immersion brought together women from Egypt, Yemen, Syria, and Libya to closely observe Tunisia’s emerging experience in transitional justice, including the ways in which issues of gender-based violence and the experiences of women are being addressed.

"Tunisia is an incredibly important transition for the MENA region, and for the field of transitional justice more generally,” said Kelli Muddell, Director of ICTJ’s Gender Justice Program. “Gender justice advocates from around the region expressed their interest in learning directly from Tunisia, and so we designed this training in response to that demand."

The participants met with staff from the Tunisian Ministry for Human Rights and Transitional Justice as well as former members of the technical committee which supervised the National Dialogue on Transitional Justice. A meeting was also held at the Tunisian Ministry of Women and Family Affairs and with members of the National Constituent Assembly.

The activists met with former political prisoners of both secular and Islamist political groups for a discussion about their struggles and expectations as victims, as well as the challenges they and their families faced before, during, and after their imprisonment.

Participants were introduced to laws which are presently under discussion, such as Tunisia’s Basic Law on the Organization of Transitional Justice Foundations and Area of Competence, and the draft political exclusion law. They also learned about the strategies and challenges of incorporating gender justice into the transitional justice process.

For the participants, the immersion course gave them new hope for collaboration and dialogue.

Hallak explains how these lessons will be brought back to her work in Syria, where, despite the ongoing conflict, gender justice and women’s rights are on the agenda in plans already underway for transitional justice.

“This experience helped us realize our responsibilities as women toward our countries,” said Hallak. “Due to the difficult and complex situation in Syria our tasks will be doubled and we should start working on training women on their role in documentation, civil peace, and other tasks.”

The trip is part of a two year project run by ICTJ’s Gender Justice Program and focused on building the capacity of women’s rights groups in the MENA region, and is funded by the European Union. To date, over 100 activists from across MENA have participated in ICTJ’s regional and country-specific workshops aimed at increasing their knowledge about how transitional justice can be used to address gender-based violence. Learn more about ICTJ's Gender Justice work in the Middle East and North Africa here. Photo: Participants in ICTJ's immersion course in Tunis, April 2013.