The one-day forum “Latin American Experiences with Truth Commissions,” organized by the International Center for Transitional Justice in Bogotá on July 22, brought together leading experts to discuss experiences and lessons learned from truth-seeking processes that shed light on massive human rights violations in four countries: Argentina, Guatemala, Paraguay, and Peru. 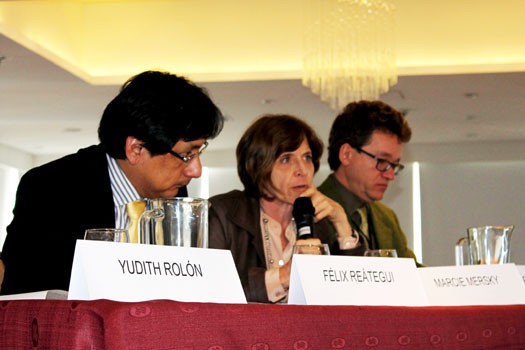 The one-day forum “Latin American Experiences with Truth Commissions,” organized by the International Center for Transitional Justice in Bogotá on July 22, brought together leading experts to discuss experiences and lessons learned from truth-seeking processes that shed light on massive human rights violations in four countries: Argentina, Guatemala, Paraguay, and Peru.

Guided by the need to make the public aware of the horrors perpetrated against civilians, truth commissions were the first steps taken by these societies to uncover and confront their past.

The forum provided insights for Colombia, which is now debating how to proceed in its search for the truth about human rights violations that occurred during the country’s armed conflict, which has lasted over 50 years.

Mission and Objectives of a Truth Commission

The initial steps in establishing a truth commission are vital to its impact, as are defining its mandate, objectives, and scope, said Eduardo González, director of ICTJ’s Truth and Memory program and a former member of the Peruvian Truth and Reconciliation Commission, and and Rafael Mazzella, a member of Argentina’s truth commission (known as CONADEP).

Determining the historical period to be investigated and the types of human rights violations, groups of possible perpetrators, and territory to be covered are fundamental. In Argentina, for example, investigations in rural areas led the truth commission to discover that the upper-middle class in urban areas was not the only group victimized in the Dirty Wars, as had been assumed. “In the countryside we found 3,000 cases that were not registered by organizations, and 65% of them involved illiterate populations,” Mazzella explained

Investigation of a Truth Commission: What to Focus On?

Marcie Mersky, program director at ICTJ and a former member of the Guatemalan Commission for Historical Clarification, stressed that the Guatemalan commission had resulted from civil society efforts to confront the state in its denial of violence. However, in the end, the commission’s mandate, which was negotiated as part of the peace agreements, did not reflect their goals.

The Guatemalan commission, which investigated crimes committed from 1962 to 1996, recorded some 7,500 cases – which included almost 24,000 extrajudicial executions, 6,000 enforced disappearances, and almost 680 massacres. But these represent only a fraction of the total number of victims. According to statistical analysis, there were approximately 160,000 deaths, 40,000 enforced disappearances, and 600,000 displaced persons – all of them civilians – out of a small population of around six million. To investigate these cases, the commission had established regional offices and sent out staff to search for victims and their families.

A truth commission must address the crimes committed during the period in question as well as examine the past and present experience of victims: who they are, how many of them there are, where they are, what damage they suffered, what their needs are, and what they are asking for. The commission must also identify the main truths it wishes to find out, and which truths it is responsible for clarifying, according to its mandate. Thus, according to Reátegui, it must clarify “one truth about the legal aspects of the process of violence, and another about the types of knowledge we need to transmit to society, which include the sociological, anthropological and psychological factors, among others, underlying the development of the violence.”

Yudith Rolón, a victims’ defense lawyer and representative of Paraguay’s Truth and Justice Commission, explained how the Paraguayan commission approached its investigations. The commission, which had been designed to promote justice rather than reconciliation, focused on identifying human rights violations committed by state and parastate agents, including enforced disappearances, torture, and exile. Its commissioners stressed arbitrary detentions and land seizures as well as their effects on specific populations, such as women, children, and indigenous populations.

A Truth Commissions’ Contribution to Justice

A special session on the contribution of truth commissions to justice looked at Peru and Argentina as examples.


Mazzella spoke about Argentina’s Nunca Más (Never Again) report and its impact on the justice system. According to Mazzella, the first consequence of the report’s publication was the trial of the military juntas, a campaign promise made by Argentian President Raúl Alfonsín. The Prosecutor’s Office chose to press charges in 711 cases documented by CONADEP. Even now, Mazzella explained, the Nunca Más report continues to be used in prosecuting cases of crimes against humanity.

Participation: The Power of a Truth Commission

One of the issues of greatest concern to Colombian society in creating a truth-seeking mechanism is the participation of civil society, which is highly organized in the country. Mersky and González spoke of the experiences of civil society in Guatemala and Peru.

Mersky said that in Guatemala, as in Colombia, year after year, civil society organizations had published reports of human rights violations in the country, “telling the truth and bearing witness to what was happening.” However, having a truth commission led to an important social and political process in Guatemala. “People in power often think that a truth commission’s job is to close a chapter. But successful commissions have tended, rather, to open the book,” she said.

“Recommendations on policy, on institutional reform, can become a sticking point, and it’s civil society that can move forward on implementing the truth commission’s recommendations,” he concluded.

The forum ended with a session analyzing the nature and content of the final reports of some of the four truth commissions. Guatemala’s commission, for example, did not limit itself to discussing the events, but included the impact that violations had had on society, organizations, and institutions, especially the legal system. For the first time in a Latin American truth commission report, it examined racism as the cause of the conflict and as a state policy of counterinsurgency. Among its twelve volumes of findings, the commission included complete cases and recovered the names of numerous victims.

A special feature of the final report of Paraguay’s Truth and Justice Commission is that it includes a list of people identified by victims as perpetrators, and it recognizes seven sites of repression, which are starting to be reclaimed as memorial sites. In crafting recommendations, both the Guatemalan and the Paraguayan commissions based their suggestions on victims who had testified. The panelists emphasized the importance of recommendations in the final report, because, in their view, truth commissions do not resolve a society’s problems, but open up ways for society to move forward.

How is a truth commission established? Learn about the process step by step with this interactive presentation, In Search of Truth.