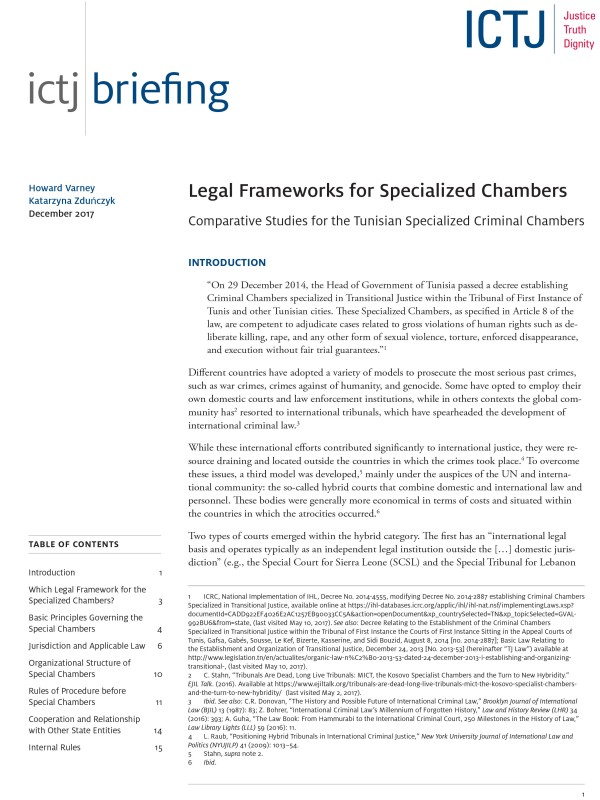 “On 29 December 2014, the Head of Government of Tunisia passed a decree establishing Criminal Chambers specialized in Transitional Justice within the Tribunal of First Instance of Tunis and other Tunisian cities. These Specialized Chambers, as specified in Article 8 of the law, are competent to adjudicate cases related to gross violations of human rights such as deliberate killing, rape, and any other form of sexual violence, torture, enforced disappearance, and execution without fair trial guarantees.”

Different countries have adopted a variety of models to prosecute the most serious past crimes, such as war crimes, crimes against of humanity, and genocide. Some have opted to employ their own domestic courts and law enforcement institutions, while in others contexts the global community has resorted to international tribunals, which have spearheaded the development of international criminal law.

Two types of courts emerged within the hybrid category. The first has an “international legal basis and operates typically as an independent legal institution outside the […] domestic jurisdiction” (e.g., the Special Court for Sierra Leone (SCSL) and the Special Tribunal for Lebanon(ST)), whereas the second kind are “mixed domestic-international” courts that “form part of the domestic system but with adjustment in relation to the composition of staff or the applicable law” (e.g., War Crimes Chamber in Bosnia and Herzegovina (WCC BiH), Iraqi Special Tribunal (IST), War Crimes Chamber in Serbia (WCC Serbia), or Special Panels to the Dili District Court in East Timor (SPSC)). In some countries only specialized chambers were established, while in others, the specialization also involved the creation of an office of the prosecutor and other units, such as the registry and the defense.

Tunisia has adopted a purely domestic model. It established the Specialized Criminal Chambers (SCCs) under national law within the courts of first instance, and the SCCs have exclusive jurisdiction over the crimes in question. While the 2013 Basic Law on Transitional Justice (hereinafter “TJ Law”) provides for the establishment of the SCC, it lacks specific provisions regulating their organization and functioning.

There is no blueprint to establishing special chambers. The details in respect of jurisdiction, structure, and rules of evidence and procedure change from one example to another. This briefing paper will provide an overview of such components.

Other briefing papers in this series on transitional justice in Tunisia include:

Transitional Justice in Tunisia: Tension Between the Need for Accountability and Due Process Rights

The Role of Victims in Criminal Proceedings