Transitional Justice in Tunisia: Tension Between the Need for Accountability and Due Process Rights 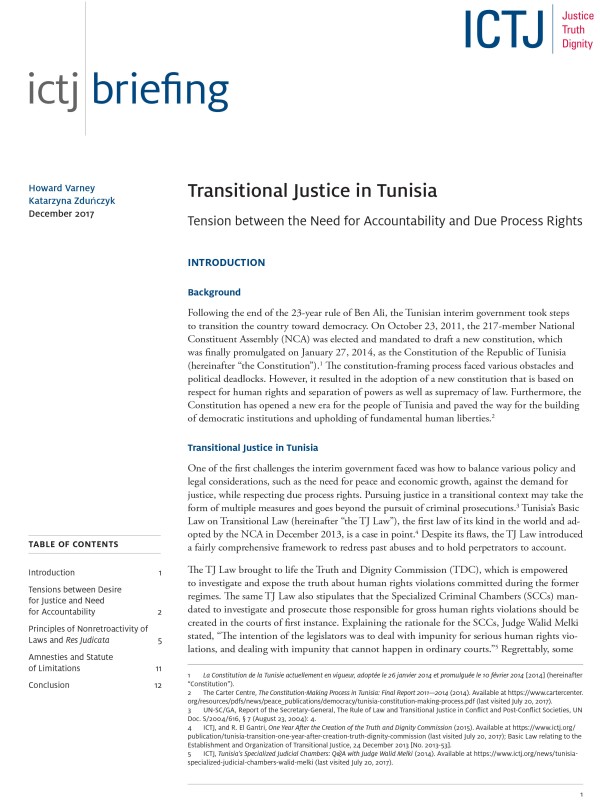 Following the end of the 23-year rule of Ben Ali, the Tunisian interim government took steps to transition the country toward democracy. On October 23, 2011, the 217-member National Constituent Assembly (NCA) was elected and mandated to draft a new constitution, which was finally promulgated on January 27, 2014, as the Constitution of the Republic of Tunisia (hereinafter “the Constitution”). The constitution-framing process faced various obstacles and political deadlocks. However, it resulted in the adoption of a new constitution that is based on respect for human rights and separation of powers as well as supremacy of law. Furthermore, the Constitution has opened a new era for the people of Tunisia and paved the way for the building of democratic institutions and upholding of fundamental human liberties.

One of the first challenges the interim government faced was how to balance various policy and legal considerations, such as the need for peace and economic growth, against the demand for justice, while respecting due process rights. Pursuing justice in a transitional context may take the form of multiple measures and goes beyond the pursuit of criminal prosecutions. Tunisia’s Basic Law on Transitional Law (hereinafter “the TJ Law”), the first law of its kind in the world and adopted by the NCA in December 2013, is a case in point. Despite its flaws, the TJ Law introduced a fairly comprehensive framework to redress past abuses and to hold perpetrators to account.

The TJ Law brought to life the Truth and Dignity Commission (TDC), which is empowered to investigate and expose the truth about human rights violations committed during the former regimes. The same TJ Law also stipulates that the Specialized Criminal Chambers (SCCs) mandated to investigate and prosecute those responsible for gross human rights violations should be created in the courts of first instance. Explaining the rationale for the SCCs, Judge Walid Melki stated, “The intention of the legislators was to deal with impunity for serious human rights violations, and dealing with impunity that cannot happen in ordinary courts.” Regrettably, some four years after the adoption of the TJ Law, the Tunisia government has still not operationalized these special courts.

In the immediate aftermath of the revolution, the Tunisian interim government was under intense pressure from the public to undertake firm and decisive steps aimed at making a decisive break from the repressive past. Policymakers responded with a number of ad hoc transitional justice measures. The first signs of tensions between the desire for justice and respect for due process rights arose during the military and criminal trials of Ben Ali and certain senior officials from his inner circle. Observers raised concerns over the speed of these proceedings, the use of military courts, the fact that Ben Ali was tried in absentia, and that the charges did not reflect the seriousness of crimes committed. Another shortcoming was that the Tunisian Penal Code did not provide for the characterization of international crimes and lacked provisions related to command responsibility.

In this regard, a case known as the Barraket Essahel affair requires special attention. Former Interior Minister Abdallah Kallel and three other high security officials were tried before the military courts for the 1991 arrest, detention, and torture of military officers who were allegedly plotting against the government. Although Tunisia ratified the Convention against Torture (CAT) on September 23, 1988, the crime of torture was not incorporated into Tunisian law until in 1999. For this reason Abdallah Kallel and others were ultimately convicted for “violence exercised against others,” and the sanctions imposed were not so severe. The military court ruled that trying and convicting them for torture would violate the principle of nonretroactive application of law.

Other briefing papers in this series on transitional justice in Tunisia include:

The Role of Victims in Criminal Proceedings