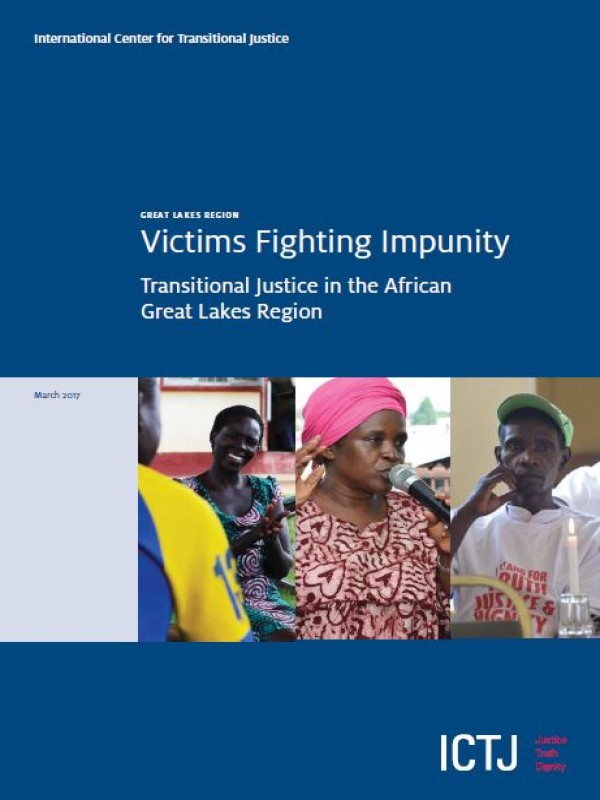 The International Center for Transitional Justice’s experience working in Uganda, Kenya, and the Democratic Republic of Congo (DRC) in this regard has followed a pattern we have seen in other contexts, where it has been important to move beyond the “integrated approach” to transitional justice,1 and codified frameworks, that can take years to operationalize and are backed only theoretically by government. Given this, ICTJ has worked with local organizations in Great Lakes countries to identify and support more limited, sometimes unofficial, processes that may have more realistic chances of success and gaining political support, while continuing, where appropriate, to push for the implementation of other measures that may or may not have been included in the original formal transitional justice framework. Through a more targeted approach, based on political analysis of the evolving context, the intention is to move forward on one measure in a way that not only advances acknowledgement, accountability, and reform directly, but also creates space for other objectives to be pursued in the future.

The paper begins with an overview of the transitional justice processes currently underway in Uganda, Kenya, and the DRC. Next, it identifies lessons learned from ICTJ’s experience of working in the Great Lakes region, which may be applicable in other countries. These lessons include the importance of understanding the needs of victims, conducting a thorough political analysis, identifying strategic and realistic opportunities for transitional justice, investing in and supporting a domestic constituency to take ownership of the process, and creating and facilitating interactions between the state and victims/civil society. Together, these strategies can facilitate the creation of space for the design and implementation of context-specific, locally owned measures that provide or advance meaningful acknowledgement, redress, accountability, and reform. The experiences examined below are based on work that is still in progress and has not necessarily achieved all potential results yet. However, we believe that the work described here has attained some level of success in laying a foundation for meaningful and sustainable transitional justice processes in these countries in the future.

This paper offers a concrete analysis of more general critical reflections that have grown out of ICTJ practice regarding what is often referred to as an integrated (or comprehensive)approach to transitional justice. Such an approach refers to an attempt, often through a peace agreement or legislation, to simultaneously create, define, or commit to multiple transitional justice measures—usually the so-called “four pillars” of transitional justice, namely truth seeking, reparations, prosecutions, and institutional reform. This approach may be codified officially by a peace agreement or policy that sets out the different measures. It may include a system to establish their interrelationships and/or a sequence for implementation.

The model of an integrated approach is rooted in different sources. One is the very important body of human rights activism, rulings, and resolutions of the past three decades that have led to the formal identification of the rights of victims of grave human rights violations as the right to truth, justice, reparations, and guarantees of non-recurrence as well as the standardization that grew out of international recognition of transitional justice as part of rule of law and peacebuilding efforts. A second source is more strongly conceptual and has led to theories that suggest strong positive synergies or interactions among these measures meant to advance victims’ rights (or the four pillars) when designed together and implemented as part of a coherent, preconceived plan or policy.

While conceptually compelling, on the ground such an attempt to create and or implement a comprehensive model, with little reference to the political and social context, available human and material resources, or the more specific concerns of victims, has often led to mechanical, “template-like” measures if they are implemented or to years of delay to create the multiple and complex policies required. Common consequences have included limited meaningful participation by victims or civil society, paltry responses to victims, limited impact on fighting impunity or building trust, deficits in social dynamism in support of victims’ rights, great frustration, and rapid declines in international support. Efforts in Great Lakes countries on transitional justice using such a comprehensive model provide many examples of such consequences, as will be discussed below.

The difficulties in generating successful transitional justice processes through an integrated approach does not mean “throwing the baby out with the bathwater” or giving up on the fundamental commitment to victims’ rights as an essential part of building stable, peaceful, and inclusive societies in the long term. Rather, the challenges at hand are to pay more attention to the context, to listen to victims and other stakeholders about appropriate measures of redress and about what can work, and to identify strategies and actions that may be small at any given time, but can provide some effective, albeit partial, response and build momentum and experience for further action.

ICTJ presents here some of the lessons that can be learned from working to advance transitional justice in three countries in the Great Lakes region, in the hopes that they can frame new efforts in the region and elsewhere.

Nearly all of the states that make up the Great Lakes Region have in recent years experienced political strife and armed conflict, which have led to severe humanitarian consequences, including gross violations of human rights, mass displacement of populations, and unprecedented levels of sexual and gender-based crimes. The challenges in the region continue to be complex and interconnected. Each of the countries affected by conflict, including Uganda, Kenya, and the DRC, have initiated a series of institutional responses to address their legacy of gross human rights violations and put an end to impunity for mass crimes.

In addition, the international and regional element of the conflicts led to the establishment of the International Conference of the Great Lakes (ICGLR) to coordinate regional security efforts and create “conditions for security, stability, and sustainable development.” The ICGLR pact, signed in 2008 by the twelve ICGLR member states (among them, Uganda, Kenya, and the DRC), consists of ten protocols, including the “Protocol on the prevention and the punishment of the crime of Genocide, War Crimes, Crimes against Humanity and all forms of discrimination.”4 In Uganda, Kenya, and the DRC various processes led at the elite, national level, with significant international support, have developed integrated frameworks that set out commitments to implement a variety of transitional justice measures and a vision of how these measures will be sequenced and interact with each other.

However, for a variety of reasons, the adoption of the integrated frameworks and other commitments to ending impunity have not been matched by action on the part of the states to realize the goals of acknowledgment, accountability, and reform. Instead, in each of these three countries, victims, civil society, and some state allies have come together to address the challenges of implementing the integrated frameworks according to the original process envisioned at the national level. By forming often contentious and difficult relationships, these actors have succeeded in moving forward some limited measures of transitional justice while opening the door for more measures in the future.