Forty Years after Cambodian Genocide, A New Documentary Celebrates the Music that Lived On

The new film "Don't Think I've Forgotten: Cambodia’s Lost Rock and Roll" explains the events of 1960s and 70s through the eyes of the musicians and artists who ushered in a new era of sound, only to be silenced too soon. As the world commemorates the 40th anniversary of the genocide in Cambodia, the new documentary presents the untold story of how their music managed to survive. 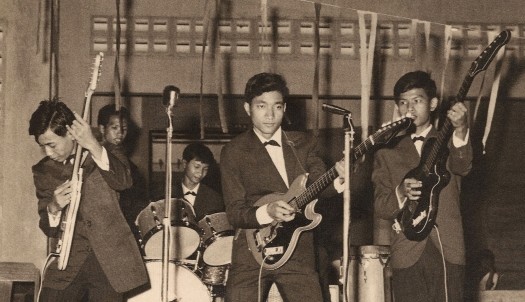 On April 17th, 1975, Khmer Rouge forces entered Phnom Penh and emptied the city of its residents. After the taking of the capital, the Khmer Rouge launched a campaign to eradicate all Western influence in the country; educators, lawyers, doctors, and other intellectuals were brutally targeted. In particular, however, the regime made a point to target the true rulers of chic cosmopolitan life at the time: popular musicians, songwriters, and singers.

Forty years later, as the world commemorates the victims of the genocide in Cambodia, a new documentary presents the untold story of how their music managed to survive.

The film Don't Think I've Forgotten: Cambodia’s Lost Rock and Roll explains the events of 1960s and 70s through the eyes of the musicians and artists who ushered in a new era of sound, only to be silenced too soon. Directed by John Pirozzi, the story is told through vivid footage and is a tribute to the vital role of freedom of self-expression, and a true celebration of the role of music, culture and film in the effort to remember the past.

The New Sound of Music

Young musicians themselves borrowed and adapted these new music styles, ranging from French and American rock and roll, to the Afro-Cuban inspired "cha-cha-cha" rhythms: Sinn Sisamouth, a giant of the music at the time, recorded and performed up-tempo "a-go-go" style infused with traditional Cambodian sounds. Later, the popular boy-band Baksei Cham Krong emulated the performance style of The Shadows of London to their adoring, dancing fans. These songwriters and performers epitomized the spirit of a generation, and reflected the vibrant popular culture of Cambodia at the time.

Meanwhile, however, Cambodian military engagement with the Khmer Rouge was escalating, and the music was soon interrupted by the guns of war. By 1975, the small guerrilla effort lead by Pol Pot grew to about 700,000, with this support the Khmer Rouge were able to defeat Lon Nol in a civil war that caused the deaths of an estimated 156,000, half of whom were civilians. Pol Pot's regime forced the population to work as laborers in a federation of collective farms. In order to achieve this, inhabitants of towns were forced to leave the cities in droves; those who refused this exodus were killed.

The forcible removable of city dwellers in to the countryside scattered the “greats” of the music industry—a small number managed to flee the country, but many perished as a result of famine, or were executed after they were recognized. Those who had once performed to audiences of thousands hid their identities from the authorities by claiming they were banana sellers; others survived only by volunteering to play propaganda music for the regime. Disease was rife, executions the norm, and widespread starvation ultimately led to the deaths of over two million people.

To hear more about the making of this film, below, ICTJ’s Hannah Dunphy speaks with Dr. LinDa Saphan from College of Mount Saint Vincent, and Associate Producer of the film.

Capturing the Past through Film

In the interview with ICTJ, Associate Producer Dr. LinDa Saphan—who herself escaped Cambodia in the 1970s—shares her memories of listening to this kind of music when she was young, describes the emotional first screenings of the film in Phnom Penh, and why this film is so important to Cambodians affected by the war.

She explains that there is still a need in Cambodia today for people to talk about the genocide, especially between generations, and part of the reason for making the film was to bring awareness to the truth of these events. This is particularly important for young people, she points out, as the full history of the Khmer Rouge has only been taught to students for a little over a year, and denial or disbelief about the past is not uncommon.

“Many are skeptical,” she says, and recalls one young person who admitted they thought their parents had been “making it up.”

The documentary is yet another example of how documentary films—and other cultural interventions such as theater, writing and visual art—can serve as vehicles for social transformation after conflict, in ways that political or legal efforts often cannot. ICTJ’s recent research on culture and transitional justice makes specific reference to the unique role of film in projects of transitional justice:

In the subsequent task of reckoning with the injustices left in conflict’s wake, film communicates a message that can reach a broader public, including those within a society who may have never seen these experiences depicted, about what remains to be done. As an enduring art form, film becomes one small part of the larger cultural expression of how the past is constructed and remembered in the collective consciousness.

Other memory initiatives and sharing of survivor’s stories exist, such as museums and institutes such as the Documentation Center of Cambodia, as well as other documentary films; however, Saphan points out that “Don’t Think I’ve Forgotten” is the first film that tries to tell the “whole picture.”

“You don’t have a sense of loss if you do not tell what was before,” she says, adding that she hopes the film can help Western audiences confront their own cultural assumptions about Cambodia by presenting the modern, “hip” way of life that flourished before the war, humanizing the victims of atrocities that are too often remembered only as statistics.

As the world marks the 40th anniversary of this horrific chapter in history, “Don’t Think I’ve Forgotten: Cambodia's Lost Rock and Roll” is an important contribution to the historical record of the truth. It is also a testament to the power of film, music, and art to unearth a joyous past out from under the dark shadow of war.