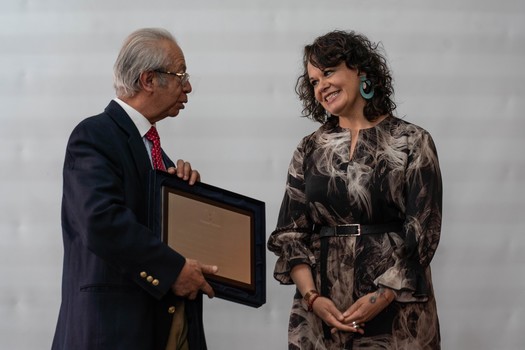 Other recipients of the honor include Teresita Gaviria, director of Madres de la Candelaria and victim of the country’s conflict; Mario Enrique Gómez, director of social and human rights projects at the Restrepo Barco Foundation; Olga Lucía Quintero, a social leader from the rural area of Catatumbo; and Todd Howland, former representative of the High Commissioner to the United Nations for Human Rights in Colombia.

María Camila Moreno, who has devoted 25 years of her life to peacebuilding, accepted the award also on behalf of ICTJ, which played a vital role in brokering a political exit from Colombia’s armed conflict and has been an instrumental partner in the implementation of the final peace agreement between the government and FARC guerrillas.

In her acceptance speech, Moreno stressed the need for profound change in Colombian society. “The work that has yet to be done in Colombia in order to attain peace requires a deep transformation of our paradigms,” she said. She invited attendees in the auditorium to exercise empathy and compassion not from a place of moral superiority, but out of humility and a recognition that everyone is imperfect.

Speaking about the progress of the transitional justice process in Colombia, Moreno encouraged those present not to give up on the struggle for peace. “It has only been three years. What international experience has taught us is that transitional processes in the world tend to be long and difficult, sometimes taking many generations,” she explained. The achievements so far of the peace agreement and the challenges currently facing the process, she said, should both inspire Colombians and motivate them to build a better, safer, and more equitable country.