The Future of Peace in Afghanistan: An Interview with ICTJ’s Reem El Gantri

After several years hiatus, ICTJ has recently resumed work in Afghanistan. Last month, ICTJ’s communication intern, Edward Mercado-Gumbs, sat down with expert and cohead of ICTJ’s program in Afghanistan Reem El Gantri to discuss ICTJ’s latest engagement in the country, as well as the prospects for justice and peace. 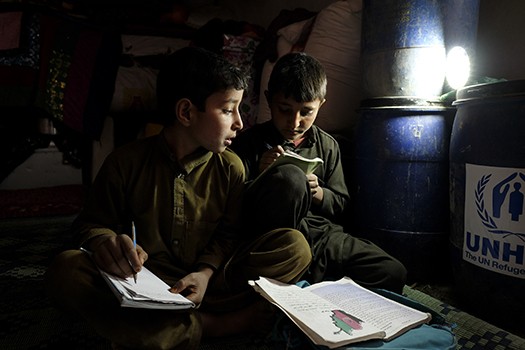 In 2001, the United States led a war in Afghanistan to overthrow the Taliban regime, which had dominated the country since 1996. In the years that followed, Afghanistan has endured ongoing violence and destruction wreaked by the forces battling for control.

Early last year, the United States and the Taliban signed a ceasefire agreement that, among other things, called for the departure of U.S. troops, signaling an end to the 20-year conflict. Yet, the direction the peace process will take is anyone’s guess, given the uptick in violence against members of civil society, particularly women, the Biden administration’s recent decision to push back the withdrawal of U.S. forces to September 11, 2021, and the Taliban’s threats to renew their attacks on foreign troops if they do not pull out.

In mid-May, the Taliban and the Afghan government agreed to a three-day ceasefire in celebration of Eid al-Fitr, which ends the month of Ramadan. Both parties subsequently sent officials to Doha, Qatar, to rekindle the stalled peace negotiations. However, soon after, the two sides returned to fighting. As it stands, the most powerful forces in Afghanistan have done little to curb the violence against the Afghan people.

In the past, ICTJ supported Afghan civil society organizations and victims’ groups seeking justice for human rights violations and combatting gender and other forms of discrimination. ICTJ helped strengthen these organizations by providing them technical assistance and training.

After several years hiatus, ICTJ has recently resumed work in Afghanistan. Last month, ICTJ’s communication intern, Edward Mercado-Gumbs, sat down with expert and cohead of ICTJ’s program in Afghanistan Reem El Gantri to discuss ICTJ’s latest engagement in the country, as well as the prospects for justice and peace.

Edward Mercado-Gumbs: Considering Afghanistan’s complex modern history—the Soviet occupation, civil wars, Taliban rule, and the U.S. invasion—at what point did ICTJ first get involved in the country, and what is it trying to accomplish there now?

Reem El Gantri: For about 10 years, from 2002 to 2012, ICTJ worked in Afghanistan. We worked very closely with the Afghan Independent Human Rights Commission [AIHRC] on its A Call for Justice report and provided technical assistance for its conflict mapping report.

We developed close relationships with civil society organizations and helped build their capacity for documentation, advocacy, and strategy. We provided trainings on transitional justice, as we usually do, and guidance on how best to deal with victims. This in turn allowed them to better support victims in their quest for justice and to become key players in transitional justice processes.

Edward Mercado-Gumbs: What is ICTJ doing now in Afghanistan, after winding down its operations in 2012?

Reem El Gantri: We have a program but it’s remote at the moment. AIHRC reached out to us after the bilateral discussions about the country’s ongoing peace negotiations. AIHRC has a transitional justice unit, and asked us if we would train the staff in order to create a core of Afghan experts in transitional justice. We started providing webinars to AIHRC in September and October 2020, mainly on the topics of amnesty and reparations—very important issues for the peace process and victims’ rights in Afghanistan.

Edward Mercado-Gumbs: In the media, we always hear about the main stakeholders in Afghanistan as being the Afghan government, and the Taliban, and the United States. What other  actors and organizations do you think should be recognized?

Reem El Gantri: Civil society organizations in general play a critical role in conveying the people’s needs and aspirations related to a new Afghanistan, as well as in preserving the civil rights and freedoms that have been achieved in the past two decades. Women, in particular, are understandably concerned about losing what they have gained in terms of education and civic participation if they and their interests are not properly represented during the peace process. It’s therefore key to ensure that considerations of women’s rights are included.

Edward Mercado-Gumbs: What obstacles may be preventing the peace talks from being more inclusive?

Reem El Gantri: There are many, many obstacles, not just related to the Taliban and the Afghan government.

One perhaps overlooked but significant barrier has to do with travel visas. It’s not easy for Afghan citizens to get visas. I’ve had discussions with civil society organizations, and they’ve said that even if they decided to go and lobby the talks held in Istanbul, for example, it wouldn’t matter because they can’t even travel there. I think other stakeholders could help make it easier for civil society organizations to attend these conferences by facilitating their visa applications.

Edward Mercado-Gumbs: ICTJ often collaborates with local organizations and artists on cultural projects that seek to raise awareness among the wider pubic about pressing transitional justice issues. In its previous work in Afghanistan, ICTJ ran a program that included community theater. I believe ICTJ will be doing something similar in the country once again. Why community theater?

Reem El Gantri: Yes, in partnership with the Afghanistan Human Rights and Democracy Organization [AHRDO], our program will develop a community theater project.

Victims are at the center of transitional justice. In Afghanistan, transitional justice initiatives, whether traditional or non-traditional, are not easy to implement; the public space for them has shrunk due to the ongoing violence. It is thus very important to find alternatives that offer victims and ordinary Afghans the opportunity for public expression, and that advance peace and justice. This is how we got involved in community theater. We found that community theater and storytelling were means of expression in a safe space, especially in Afghanistan.

In 2008, we organized a pilot workshop where participants developed a play called a Light in the Dark Nights. It portrayed life in Afghanistan after the collapse of the communist regime and tackled issues such as women’s education under the Taliban and internal displacement. After that, our partners AHRDO put on a play about three decades of war in Afghanistan, based on true stories of Afghan victims collected during participatory theater workshops.

People went to the plays, and they sparked public conversations. They also inspired victims to become more civically active and helped them to better express themselves and their needs and demands. For example, after attending a participatory theater event, residents from one village formed their own victims’ rights organization.

Edward Mercado-Gumbs: Given everything we’ve discussed, what should we look out for in the future? Should we focus our attention on the outcome of the peace talks, or is there something else we should be considering?

Reem El Gantri: The initial peace talks triggered optimism for the birth of a new era, even with the myriad issues that have arisen and the barriers that still remain. Looking to the future, I hope that Afghanistan will finally live in peace, but reality is quite different and there is still so much work to be done.

I don’t want to sound pessimistic, but you know this is the month of Ramadan [April 12 to May 12, 2021], and it has been a horrendous period for Afghans. For Afghans, for Muslims, it should be a month of peace, and I’m speaking from the perspective of being Muslim. But instead of enjoying the month, Afghan families are in mourning. It is very important to not stop thinking about those young schoolgirls whose only crimes were getting an education and belonging to the country’s persecuted Hazara ethnic minority group; 85 of them were killed in a bomb attack.

I think that the optimism the peace talks have generated, though welcomed, cannot overshadow these violations. There is a lot to be done in Afghanistan, and if the country is to ever end the vicious cycle of violence, then all actors involved—both Afghan and international—must make a concerted effort to build peace and uphold human rights.

Hopefully, my vision, looking ahead, is not too sad.

Edward Mercado-Gumbs: I don’t think so; I think it’s a very pragmatic outlook. It acknowledges that there’s a lot of work to be done, but at the same time, we can still be optimistic about the progress that has been made so far.

Thank you so much for taking the time to speak with me about such a complex subject.

Reem El Gantri: You’re welcome. Thank you for inviting me.

PHOTO: Schoolboys use a solar lamps provided by UNHCR and partner MADERA to read, write, and study their lessons in Jalalabad, Afghanistan, in January 2018. The photo was part of the humanitarian photo exhibit "Journeys of Hope and Resilience" held at the U.S. Embassy in Kabul in April 2018. (U.S. Embassy Kabul Afghanistan)