Controlling the Narrative: An Afghan Human Rights Expert Describes the Taliban’s Stranglehold on the Media 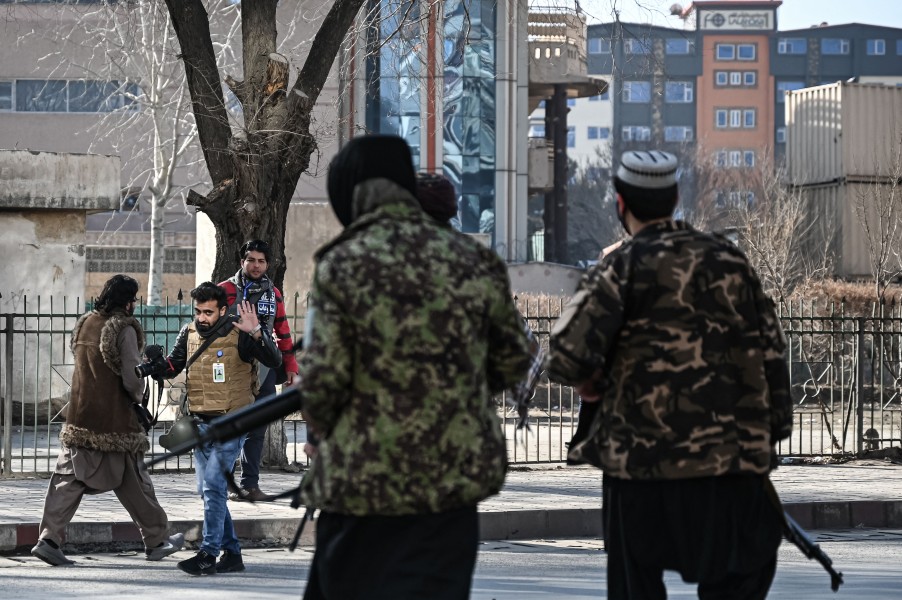 The International Federation of Journalists recently characterized Afghanistan as the single most dangerous country in the world for journalists and other media workers. Since the Taliban seized control in August 2021, the regime has put in place a series of policies severely restricting independent media and giving the regime all but total control over news outlets and their content. Journalists have since been subjected to extreme forms of surveillance, intimidation, arbitrary arrest and detention, physical abuse, enforced disappearance, and extrajudicial killing.

ICTJ and the Afghanistan Human Rights and Democracy Organization (AHRDO) have been working together since 2009 to document human rights violations against journalists under the Taliban. Kobra Moradi is a lawyer and researcher working with AHRDO and author of the recent report, Afghan Media Under the Taliban: Restrictions and Violations. ICTJ Communications intern Hannah Frasure sat down with the author to learn more about the report, what impact these restrictions have had on journalists and the free press, and the important role media can still play in such a repressive regime.

Hannah Frasure: Could you describe the current situation for journalists and the media in Afghanistan?

Kobra Moradi: The Taliban has created conditions that make it impossible for the Afghan media to operate freely and independently. They have passed several policies that control every aspect of the media, especially what type of information or content the media can broadcast or publish. For example, there is a ban on a wide range of topics that run counter to what the Taliban considers Islamic values or Islamic religious beliefs, as well as a ban on information that may negatively influence the public’s attitude toward the Taliban, or that may insult national figures.

The Taliban's policies are extremely vague. They don’t provide any operational definitions, for example, for terms like “Islamic values.” And the type of information that [they consider] may negatively affect public attitudes is open-ended and extremely broad; information that may insult national figures extends to almost any topic that the Taliban officials dislike or that paints them in a negative light.

Also, journalists are required to get a permission letter from Taliban officials before visiting a particular area. Whatever they report on, they have to share it with the Taliban beforehand to get their approval.

Since August 2021, journalists and other members of the media have been subject to extreme forms of surveillance, intimidation, in particular arbitrary arrests and detention. There have also been cases of physical abuse, enforced disappearance, and even extrajudicial killing.

All of these violations have been committed with complete impunity. To date, there has been no public information indicating that investigations into those violations have been conducted. And the punishment for non-compliance with these vague policies is carried out arbitrarily, without any consideration of due process. So basically, members of the media can receive a knock on their door or be stopped on the street randomly and detained for simply doing their job.

Kobra Moradi: Within the first few months of the Taliban takeover, almost 80 percent of women journalists lost their jobs. While generally job opportunities in journalism have become limited in Afghanistan since the Taliban took over, they have imposed restrictive and oppressive policies specifically targeting female journalists.

Many women were simply fired directly by Taliban officials and told to stay at home. For those who weren’t, the Taliban policies dictating what women can and cannot wear restrains their freedom of expression and movement, further limiting their ability to report the news. For example, due to the mandatory hijab policy, when women appear in the media, they’re forced to cover their faces—including when they’re broadcasting on TV.

There are also travel restrictions, as women are limited when it comes to where and how far they can travel without a male guardian. This prevents women journalists from attending news conferences, and it frequently makes it difficult for them to get enough information to put together a news report.

Kobra Moradi: There has definitely been a decline in terms of coverage on gender discrimination. Because women in Afghanistan tend to be much more comfortable with speaking to other women, the lack of female journalists leads to less reporting on day-to-day issues that the female population faces on a regular basis.

Hannah Frasure: When you speak to Afghan journalists, what kinds of stories do they say are underreported in the country? What effect is the decline of a free press having on Afghan society?

For example, a journalist from Kabul told AHRDO that the Taliban forbids journalists from covering issues concerning ethnic, gender, or linguistic discrimination. They do not tolerate any criticism, and journalists have been detained for reporting on women’s protests, gender discrimination, girls’ education, and local issues such as aid distribution. So almost all human rights-related topics are out of the picture.

Moreover, at the moment, the de facto Taliban government is exercising power without any national or international oversight mechanisms. The media is one of the only — if not the only — source of transparency into what the Taliban is doing. Without information coming from the media, the Taliban is able to violate rights and freedoms and abuse their power. It is in fact what they are currently doing, without any oversight and with complete impunity.

Hannah Frasure: What steps can members of the international community do to protect Afghan journalists and to pressure the Taliban to change their policies?

Kobra Moradi: Well, it would be extremely challenging, realistically speaking, to get the Taliban to change their policies. But that does not mean that we should not act. The international community can both privately and publicly make it clear to the Taliban leadership that media rights and press freedoms are non-negotiable and must be protected, and pressure them to stop the arbitrary detentions and arrests of journalists and other members of the media, and any other abuses they have been subjected to.

The international community can support media outlets and journalists within Afghanistan by providing financial, logistical, and operational support, so they can continue to operate and recruit more journalists. The international community can also fund media advocacy organizations, which have played a crucial role in terms of negotiating with the Taliban. For example, these organizations have worked to free journalists whom the Taliban had imprisoned. Strengthening the capacity of media advocacy organizations can help ensure that abuses are monitored, investigated, and documented.

Hannah Frasure: Have journalists and others in the media been successful in navigating the Taliban’s restrictive policies?

Kobra Moradi: Journalists and media workers continue to operate inside of Afghanistan against all odds, and they continue to provide information to the Afghan population and the world while putting their lives at risk. They work within the particular restrictions and oppressive environment because of their love and passion for their work and for Afghanistan. I would say that exhibiting this kind of determination and bravery within an extremely repressive environment is a huge success.

Hannah Frasure: What is your hope for the media in Afghanistan and Afghan society more generally given the likelihood that the Taliban will remain in control for the foreseeable future?

Kobra Moradi: The hope is that Afghan journalists will continue to keep up the determination, resilience, and bravery they show now, and that they will continue to provide the Afghan people and the international community information about what is happening in the country.

There are also media outlets and journalists who have been forced out of Afghanistan, who have reestablished themselves in other countries, and who continue to do their work with determination and bravery. They have published some incredible reports on, for example, corruption and the abuse of power. Both inside and outside of Afghanistan, they continue to do important work.

Hannah Frasure: Thank you so much for your time, Kobra. ICTJ appreciates your willingness to discuss your vitally important work.

Kobra Moradi: You are welcome. It was my pleasure. Thank you for having me.

PHOTO: Taliban fighters walk toward journalists during a protest in Kabul on December 28, 2021. (Mohd Asfan/AFP via Getty Images)