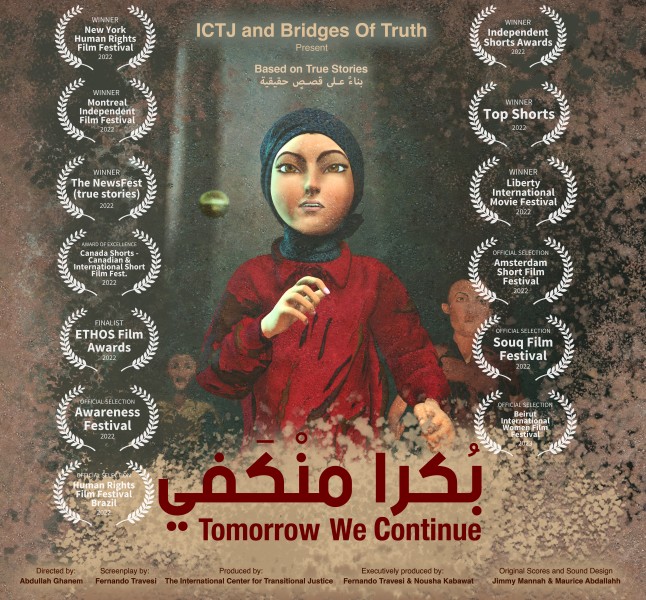 New York, December 19, 2022—ICTJ and the Bridges of Truth project are thrilled to launch Tomorrow We Continue, a new short animated documentary that follows a young mother of two whose husband was detained and disappeared by security forces in Syria some years ago. The film takes the viewer on her journey as a refugee searching for safety in Berlin and depicts the daily struggles she encounters once settled as she tries to earn a living and care for her children while continuing to search for her husband.

“We wanted to make a film that would shed light on the trauma that comes with losing a loved one to the unknown. The story is also one that someone, anywhere in the world, with a similar experience of pain and loss, will be able to relate to,” says Fernando Travesí, the film’s scriptwriter and a co-producer and ICTJ’s executive director. “We hope the film will bring solidarity to the families of the missing as well as bring people together.”

Since the uprising in Syria began in 2011, more than 100,000 people have been disappeared or arbitrarily detained. The families they leave behind may move to safer places as refugees, but the search for their loved ones persists wherever they go.

“The film is based on true stories of families of the missing, collected by a group of Syrian organizations working on the ground. The film sheds light on the limbo in which many Syrian families live, as they strive to learn the fate of their loved ones. They are stuck between holding onto hope and moving on,” explains Nousha Kabawat, a co-producer and head of ICTJ’s Syria program.

The film is the result of an ICTJ-led collaboration of seven Syrian civil society organizations (Badael, Center for Civil Society and Democracy, Dawlaty, Lawyers and Doctors for Human Rights, Syrian Center for Media and Freedom of Expression, Syrian Institute for Justice, The Day After, and Women Now For Development) known as the Bridges of Truth project. Since the project’s founding in 2017, the member organizations have raised awareness about the plight of detainees, the forcibly disappeared, and their families and advocated for meaningful justice for the innumerable victims of Syrian conflict and the regime’s repression.

Tomorrow We Continue is based on individual interviews and focus group sessions with Syrian victims and reflects the real challenges faced by families when a loved one is detained and disappeared. Those interviewed include both Syrians inside the country (from 11 of the country’s 14 provinces) and those who have settled outside of the country (many of whom now live in Turkey). They know all too well the uniquely agonizing experience of losing someone to detention or disappearance.

"For me, it was important to tell this story because it is something we tend to turn away from. I wanted to be involved in bringing attention to the plight of these families,” says Abdallah Ghanem, the film’s director. “Making a short animation film allowed us to tell a dark and complicated story in a way that would touch many people and bring the issue to the forefront.”