Colombia’s Chance to Fulfill its Historic Obligations to the Disappeared

As the government and FARC reach a peace deal, they have agreed to the creation of a special unit that will search for, locate and identify the disappeared. What do victims expect from this new body? 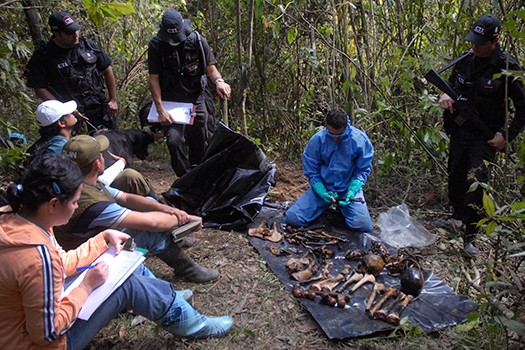 After nearly four years of negotiations, the Colombian government and the country’s biggest guerrilla group, the Revolutionary Armed Forces of Colombia (FARC), reached a historic final peace agreement last week, putting an end to the longest internal armed conflict in the Western hemisphere.

The agreement envisions the creation of several transitional justice measures – included in what is known as the “Victims’ Agreement” – aiming to fulfill victims’ right to justice, truth, reparations and guarantees of non-repetition. These measures are to be put into motion if the agreement is ratified in a national plebiscite, to be held on October 2nd.

On the International Day of the Disappeared, we direct the spotlight to one of the measures agreed to under the transitional justice umbrella: the creation of a special unit that will search for, locate, and identify those who were disappeared or went missing during the 50-year armed conflict.

Agreed by the negotiating parties in October 2015, the creation of the Search Unit for the Missing (Unidad de Búsqueda de Personas dadas por Desaparecidas) will mark a significant step forward towards addressing a heinous crime that has for long remained hidden in Colombia.

It is estimated that more than 46,000 people have been forcibly disappeared during the armed conflict. However, many more went missing under other circumstances related to the conflict, such as those who died in captivity after being kidnapped for ransom and combatants who were killed and anonymously buried in conflict zones. Combining all kinds of disappearances, the figure would rise to more than 100,000 people.

The special unit will look into this broad range of disappearance cases, a complex task that will require extensive funding, staff and technical expertise.

“This unit is an opportunity for Colombia to fulfill a historic obligation towards the thousands of missing people and their families, who for decades have been struggling to find their loved ones,” says María Camila Moreno, director of ICTJ’s Colombia office. “It is a great achievement for the families of the missing in this country.”

“Creating a dedicated, ad-hoc unit will be very important because so far the State has shown only very slow advancements, not only in locating the remains but also in shedding light on the phenomenon of enforced disappearances,” adds Moreno.

For decades the families of victims of enforced disappearance have been very vocal in their struggle for acknowledgment and government action. They hold high expectations for the creation of the special unit, but also harbor some mistrust – it is not the first time a body has set out to search for Colombia’s disappeared.

As a result of the tireless demands of the families, a law in 2000 mandated the creation of the National Search Commission for the Disappeared (Comisión Nacional de Búsqueda de Desaparecidos), tasked with investigating crimes of enforced disappearance. However, the commission always lacked essential economic and political support, and families of the disappeared found it deeply disappointing. It solved very few disappearance cases, and many of the procedures victims envisioned were never implemented.

“What we expect from the new unit is that it won’t repeat past mistakes,” says Andrea Torres Bautista, lawyer for the Nydia Erika Bautista Foundation, in reference to the National Search Commission.

Andrea’s aunt was disappeared in 1980, and since then she and her mother Yaneth have embarked in a quest for justice and truth about Nydia Erika’s disappearance by the Colombian armed forces. The foundation now supports families of victims of enforced disappearance in their struggle for justice, truth, and reparation.

For the victims’ families, the special unit’s top priority should be searching for the disappeared “seriously and diligently.”

“We hope that there will at last be an institutional body that will do what no other has done before: provide information to the victims’ families about the procedures that are being developed to find all the missing people in Colombia,” says Torres.

Torres stresses that the role of victims’ families should not be passive. “Families should advise on the creation of these entities and participate actively, because they are the most experienced in working on the disappeared,” she says.

Searching for those who were disappeared or went missing during the decades-long conflict will present great challenges, explains Diana Arango. Arango is executive director of Equitas, the only independent organization in the country with forensic expertise.

“In Colombia we have a big problem with the search for – and identification and dignified return of – remains. We hope that the special unit will be able to overcome those problems,” she says. “We need the unit to be innovative in terms of scientific investigation, so that it can locate people who were thrown into rivers, or who were buried in mass graves that are difficult to access.”

Arango also points at the need for a “robust” bank of genetic profiles, so that those who are found can be identified and returned to their families. She adds that it is essential for the state commit to respecting people’s customs and beliefs to ensure the remains are returned in a dignified way.

Both families and experts agree that sustainable peace is impossible without seriously addressing the issue of the disappeared and missing in Colombia.

Arango states: “We cannot build a democratic, peaceful society if we don’t redress that 13% of the Colombian population who are victims of the conflict. How are we going to heal our wounds and start reconciliation processes? How are we going to generate sustainable peace if we don’t know what happened with our disappeared, if we are not able to search for them and return them to their loved ones, so that they can close the cycle of uncertainty and pain? How will we be able to build peace if we are not able to acknowledge that enforced disappearances took place in Colombia and that there was indolence on the State’s side to search for them?”

Managing victims’ families’ expectations, gaining their trust and responding to their needs will be key for the success of the special unit. The information the unit gathers from all armed actors – the military, FARC, paramilitary groups and others – from victims’ families and from other resources will be fundamental in that process.

ICTJ’s Maria Camila Moreno stresses: “The past needs to be acknowledged with absolute clarity and with all the necessary information. It’s very important for this unit to achieve results in a reasonable time frame which can show victims that it is in fact possible to do this work and that the country is taking its responsibility seriously.”

Timeline: Key Moments in the Search for the Disappeared in Colombia