After three years on trial and a total of seven in detention, Thomas Lubanga gained the dubious notoriety of becoming the first person to be convicted by the International Criminal Court (ICC) in The Hague. It would be encouraging if the court, including the prosecution, indicated it saw Lubanga’s judgment as an opportunity to learn critical lessons as well as celebrate a historic day in international justice. 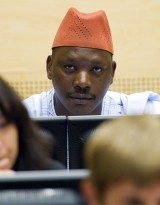 After three years on trial and a total of seven in detention, Thomas Lubanga gained the dubious notoriety of becoming the first person to be convicted by the International Criminal Court (ICC) in The Hague. In a landmark decision for international justice that affirms the protections granted to children in wars around the world, Lubanga was found guilty for his part in a common enterprise recruiting children and using them in his militia that fought in the wars in the Democratic Republic of Congo (DRC) between 2002 and 2003.

The conviction of a man who deliberately used young children in a bloody war ought to be an occasion for reflection on his crimes. At the same time, the judgment raises questions about the work of the court itself, including the length of pre-trial detention and trial, as well as aspects of the prosecution’s performance.

Lubanga came to the court’s attention as the leader of the Union of Congolese Patriots (UPC), an armed militia involved in a protracted battle for control of the gold rich province of Ituri in northeastern DRC, a region bordering Uganda and Rwanda. The Ituri conflict was part of a series of inter-ethnic and inter-state wars that engulfed eight neighboring countries and involved up to 25 armed militias at different times in 1996–2008. Lubanga’s militia was just one of many responsible for massacres, rapes, torture, mutilations, murders, and kidnapping children across central Africa. This violence resulted in the deaths of more than five million people, the deadliest conflict since the Second World War.

The judgment in the Lubanga case, which runs to almost 600 pages, is testimony to a long and complicated process that has, at times, seen the judges and lawyers replace the victims and the accused as the central characters. There should be considerable satisfaction in the fact the international community has created a permanent criminal court that has finally delivered a verdict. History will show that the prosecution achieved a conviction in its first trial.

However, it is important this moment does not pass without reflecting upon serious concerns, some of which were noted in the verdict itself. Historians and political scientists will debate the courts’ decision to define the conflict during which Lubanga was active as an internal, “non-international conflict,” despite the brooding omnipresence of both Rwanda and Uganda.

Another issue that has plagued international justice is the length of the proceedings. The detention of any man for seven years prior to conviction raises very serious issues about the quality of international justice. What if he had been acquitted? And a trial that lasts for three years on very narrow charges raises fundamental concerns about the process.

The trial chamber is very clear about whom it holds responsible for much of this. In a number of critical comments the court finds the prosecution acted negligently, costing the court considerable time and expense. The first comment refers to the use of agents known as “intermediaries” to obtain witnesses and, in some cases, evidence.

A finding of prosecution negligence is a serious matter in any jurisdiction. Public confidence requires a robust and satisfactory explanation of what happened or an undertaking to change procedures in the future.

Along with protracted debate on the issue of the disclosure of evidence in earlier stages of the trial, the court criticizes both the quality of the investigation and the charges brought. Lubanga was not charged in connection with sexual abuse of children, although there appeared to be facts that came out in the course of the trial to support such charges. For reasons few people—including the judges—have been able to understand, the prosecution opposed extending charges to cover these allegations.

It has taken almost eight years of hard work on the part of many people to arrive at this important day for international justice. Numerous victims and witnesses have taken significant risks. A dedicated group of investigators and lawyers—including on the defense side—has worked tirelessly. Despite serious criticisms of certain aspects, it would be churlish not to recognize all their efforts and their contribution to make the ICC a court that offers a credible deterrent to serious crimes. Measured reflection, however, will acknowledge that the success is not unqualified.

It would be encouraging if the court, including the prosecution, indicated it saw Lubanga’s judgment as an opportunity to learn critical lessons as well as celebrate a historic day in international justice.


But for the court to be a success requires investigations and prosecutions to be conducted in a manner that commands credibility among both victim communities and the broader international community. It is when the quality of proceedings becomes the story over the vindication of victims’ rights that serious concerns arise.

Today in Ituri it is unclear just what impact the court’s decision will have on the lives of the victims who suffered as children at his hands. These children are now adults. They live their lives in dire circumstances of insecurity and poverty. Many hope to benefit from the court’s capacity to order reparation payments—a unique power in the history of international criminal justice. The DRC endures conflict, poverty, weak government, and tension over mineral resources. The length of time it has taken to deliver justice inevitably weighs against the impact of the decision.

Much of the conflict in the Ituri province was between Lubanga’s ethnic Hema tribe, and the ethnic Lendu. The ICC prosecutor has brought two cases from this region before the court. In both cases, victims are Hema; Lubanga’s victims are children from his own tribe and the second case relates to massacres of Hema by another (Lendu) militia. As a result, the Lendu overwhelmingly believe the court is little more than an instrument in the hands of forces ranged against them. The efforts of the court have done little to restore a sense of confidence or fairness in the population.

There are some clear positives: no one can doubt that the judges have been scrupulously fair. It could be said that few prosecutors have had to work harder for a conviction. It is a momentous step for the international justice movement and a vindication of the efforts of many over decades whose sacrifices have made justice a reality for the children of Ituri. The court is intended to contribute to the prevention of atrocities by ending impunity. It has taken too long and the Lubanga investigation may not go down as a model for future generations, but the children around the world have been well-served by a case that highlights their vulnerability. That is a meaningful start.

While lessons need to be learned by the international community from what the judges describe as a flawed investigation and prosecution, the big picture cannot be lost. The leaders of armies and of states will be held accountable. Justice will prevail over impunity.