“Once the Truth is Found”: ICTJ Report Sparks Discussion in Nepal 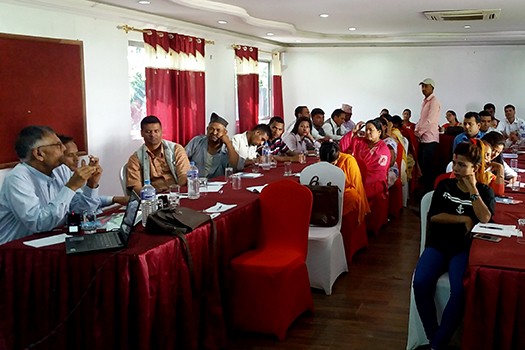 From strategic regional outposts in Pokhara and Surkhet to the capital of Kathmandu, ICTJ held local and national launch events in June for the new report “We Cannot Forget”: Truth and Memory in Post-Conflict Nepal. The report was co-authored by ICTJ and Nepali research institute Martin Chautari with the aim of broadening the understanding and awareness of what truth in transitional justice in Nepal means for everyone: victims of the 10-year conflict (from 1996-2006), human rights groups, academics, and policy-makers. The launch events held across the country started critical dialogue on the issue of truth and memory, with a particular focus on expanding the conversation beyond the limited scope of truth as a means to criminal justice.

“They called us to rebel for a new Nepal, but now they have left us behind,” said one father, whose son was among the disappeared.

The events, held at the administrative centers of provinces most affected by the conflict, served to gather those in neighboring districts to foster discussion and awareness among victims, human rights advocates, journalists and academics. The national launch, meanwhile, engaged policymakers around designing and implementing victim-centric policies around memorialization.

Among the key guests who unveiled the report were the Secretary of the Commission of Investigation on Enforced Disappeared Persons (CIEDP) and two victim leaders who represented each side of the conflict. Also in attendance were representatives from Nepal’s national bodies, including the Ministry of Peace and Reconstruction and the National Human Rights Commission (NHRC).

Aileen Thomson, ICTJ’s Head of Office in Nepal, said that those in attendance, particularly victims of the conflict, raised deep concerns about the whereabouts of the disappeared. “Without the truth about what happened, victims found themselves without any semblance of closure,” she said.

Thomson notes that victims from marginalized communities want to share how their experiences relate to the long history of marginalization against them. Others affected by the conflict highlighted a need to be recognized as “real victims,” as opposed to those who receive reparations payments not because of their experience during the war, but because of their ties to government officials. This sort of nepotism is rampant in the distribution process.

Money is Not Enough

Victims also called for reparations to extend beyond financial payments. “The children of victims must get education. Money is not enough,” said a participant in Pokhara. “What are our rights? Rights are bigger than money. Health, education, food, shelter, and clothes must be guaranteed.”

Victims see the truth as key to establishing these rights, but the truth remains contentious and elusive in Nepal. Historical and political contexts have shaped the way in which the past is understood. Seeking the truth, therefore, has a value that resonates beyond criminal justice, and can serve as an end unto itself.

“Once the truth is found, we can have recognition, compensation, understanding and imprisonment of perpetrators,” said a participant in Pokhara. “Children are now grown and want to know the truth about their parents and their neighbors. People know, but they haven’t told them.”

While victims and advocates have thus far met resistance in their efforts to seek the truth, receive reparations and create memorials to the past, Thomson hopes that they can find traction through the newly-established local governments and the yet-to-be-created provincial governments. These new structures have potential to impact victims on the ground, where progress has been slow through national processes.

“This report gives us a foundation to understand victims’ broad definitions of truth, and the value they place on memory,” Thomson says. “It will be an important tool to begin discussions with all levels of government on how they can better support victims and contribute to a more inclusive society.”

PHOTO: Participants discuss the issues raised by the report at the local launch event held in Surkhet. (Bhupendra Khanal/ICTJ).