Ten Years On, ICTJ Continues to Develop the Field of Transitional Justice 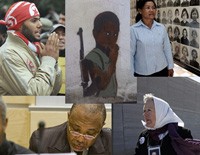 As ICTJ celebrates ten years of existence and contribution to the development of the field of transitional justice, we are poised for a future of continued engagement with partners and communities seeking to overcome legacies of mass violence and repression. Ten years on, we now work in a world increasingly aware of the of the costs of failing to systematically transition from conflict and human rights abuse to the rule of law and equal rights for all citizens, and on the other hand, of the increasing complexity of doing so.

Policymakers, practitioners, civil society groups, and other key actors in transition processes across the globe are learning that accountability for serious crimes, truth about the troubled past, institutional reform, and adequate reparations to victims are inextricably linked to key elements of successful transitions: security, development, and good governance. Transitional justice does not provide quick fixes or miracle cures for societies affected by years of violence and abuse, but it is instrumental in ensuring long term stability and preventing conflicts from recurring. It is about building trust between citizen and state as a provider and guarantor of human rights, as ICTJ’s extensive body of work clearly testifies.

The idea that unredressed massive human rights violations are an affront to justice—but also a threat to security, development, and good governance—is the foundation on which ICTJ begins the next chapter in our history. Changes taking place in the countries of the Middle East and North Africa provide a clear example of the relevance of transitional justice in today’s world. The “Arab Spring” protestors seek opportunities and security, but also justice and dignity.

In Egypt, where the popular revolution by hundreds of thousands demanding justice ended the dictatorship of Hosni Mubarak’s regime, ICTJ has partnered with the Cairo Institute for Human Rights to organize in October a major gathering of transitional justice specialists from around the world and their Egyptian counterparts. The aim of this event is to present a holistic approach to justice in transitional societies, discuss lessons learned in various contexts and how they can be of use to Egyptians in developing policies and mechanisms to address the legacy of Mubarak’s reign.

The recent historic events in Egypt will be central to this year’s Emilio Mignone Annual Lecture on Transitional Justice ICTJ has organized in cooperation with the Center for Human Rights and Justice of the NYU School of Law. Groundbreaking in many aspects, the event will feature Helen Clark, administrator of the United Nations Development Program, and Hossam Bahgat, executive director of the Egyptian Initiative for Personal Rights, one of the leaders of the popular revolution in Egypt. They will examine the relationship between justice and development with a special focus on changes in the region.

The linkages between justice, security, and development will be at the heart of a high-level discussion taking place a day after the Emilio Mignone Lecture, co-hosted by ICTJ and the Federal Department of Foreign Affairs of Switzerland. The discussion will examine how to implement the recommendations of the recent World Development Report (WDR), which for the first time links transitional justice to security and development, places human rights violations at the heart of its analysis of conflict, and explores what countries can do to avoid cycles of violence that cause untold suffering and impede development.

ICTJ participated in the WDR process through a commissioned background paper, taking part in consultations, and providing comments throughout the drafting process of the report. The effort on ICTJ’s behalf was lead by our Research Unit which is embarking on a research project of significant importance—Justice in Context: Transitional Justice and Paradigms of State and Conflict. The main aim of the project—which will be launched towards the end of the year in a major event gathering leading experts not only in transitional justice, but also in security and development—is to think through the institutional preconditions and consequences of transitional justice in new, atypical settings. Previous research done by the ICTJ has already stressed the need to strengthen the links between transitional justice and other kinds of policy interventions; transitional justice is an important element of processes of political transformation but does not exhaust the agenda of countries emerging from repression or conflict.

ICTJ’s expertise draws on lessons learned from transitional justice measures implemented in various contexts and how they may be relevant to the ongoing or future processes. A cluster of such lessons will be examined in a panel titled "Impact of the Yugoslav and Rwanda Tribunals: Lessons for the International Criminal Court", co-organized by ICTJ and Global Affairs Program of NYU at the end of November. The panel, featuring ICTJ president David Tolbert, Richard Goldstone, a judge and former prosecutor of ICTY and ICTR, and Diane Orentlicher, a scholar currently serving in the Office of War Crimes Issues for the U.S. Department of State, will explore the impact of two ad-hoc Tribunals in the affected communities and possible lessons to be drawn by the International Criminal Court (ICC).

Following the ICC Review Conference in Kampala in 2010, the complementarity principle assumed prominence. ICTJ organized a high level meeting at the Greentree Estate in New York in October 2010 to foster political debate on and support for the concept of domestic investigation and prosecution of serious crimes under the rubric of complementarity. The meeting brought international justice actors together with development and rule of law actors for the first time.

Now, ICTJ is partnering with the United Nations Development Programme (UNDP) to deepen this dialogue on complementarity among principal actors in the international justice, rule of law, and development fields. A second Greentree meeting will take place December, with participation of key donor and recipient governments, UN bodies, bilateral development agencies and international financial institutions, and NGOs. This meeting will focus in more detail how domestic investigations and prosecutions can be advanced in particular situations, such as with initiatives in situation countries such as DRC and Uganda but also in the Middle East and North Africa region.

Ten years on, as ICTJ makes new strides in strengthening knowledge about transitional justice, we continue to learn from our work and the lessons learned in more than 30 countries around the world. In the spirit of making our expertise truly available to all who can find it useful, we will be sharing the substance of the events marking our 10th anniversary with our friends and audiences everywhere in various forms and multiple languages.