Transitional Justice and the Struggle for Indigenous Rights 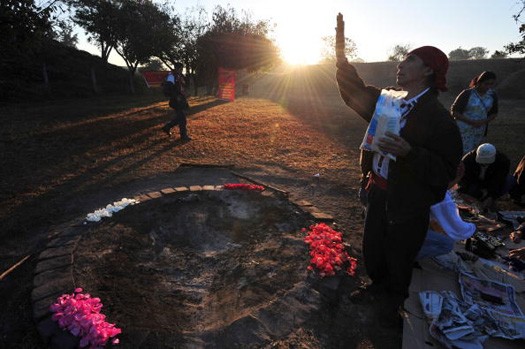 Indigenous peoples are among those most affected by contemporary conflict.

The resource-rich territories they occupy are often coveted by powerful and violent groups, and their identity is often perceived with mistrust, making them particularly vulnerable to conflict or state repression.

For centuries, indigenous nations not subjected to abrupt annihilation have been forced to battle the slow erosion of their native language, culture, and traditions.

Indigenous rights are increasingly being addressed through different transitional justice measures, and ICTJ is actively involved in the discourse on how truth commissions and other transitional justice mechanisms can help the struggle for the rights of indigenous people. In the coming months, ICTJ will be presenting or participating in four major initiatives on indigenous rights:

To launch ICTJ’s in-depth coverage of these events, we spoke with Eduardo Gonzalez, a Peruvian sociologist and director of ICTJ’s Truth and Memory Program. In this Q&A, we take closer look at the relationship between indigenous rights and transitional justice.

What can transitional justice contribute to the struggle for indigenous rights?

This activates the need for them to find some kind of remedy. Remedy is a universal right for all forms of human rights violations, but in the case of indigenous populations it has a particular significance.

According to the U.N. Declaration on the Rights of Indigenous Peoples, they have the right to be consulted and to give their consent, or withdraw their consent, of any policy that deals with their rights. If states want to launch truth commissions, reparations programs, or other transitional justice programs dealing with affectations of indigenous peoples, they need to build those programs in consultation with indigenous peoples.

In those cases, the governments of Peru and Guatemala and other countries in the region have launched institutions dealing with those violations.

However, those institutions were initially created in some sort of a culturally blind logic. They were created to examine the facts, but they were not created necessarily after consultation or discussion with indigenous peoples. And even when they established facts about crimes against indigenous populations, they did so because they worked in good faith and they were able to find and visualize those situations.

There are a number of places in the world where this is happening right now, as we speak. The genocide case against General Rios Montt in Guatemala is a case affecting indigenous populations, and they will be clearly actors in that particular drama. In North America, there is enormous, very active indigenous mobilization for economic rights, for self-government, for cultural rights. There has also been activism to identify historically-based violations and to trace the roots of the suffering of today. And this is, for example, what the Truth Commission of Canada is doing.

It's interesting to notice that both the field of truth commissions and transitional justice, on the one side, and the field of the rights of indigenous peoples on the other side, are pretty new elements in international law, and they are emerging at the same time.

The encounter is inevitable, and it's desirable. These are two very young areas for development, very open to creativity, and very open to connection.

Transitional justice has in the past linked up with other forms of reflection, such as gender, the question of children and youth, or that of development. It is high time that it realizes the need to provide indigenous activists with an additional tool to claim further rights.

The indigenous rights movements have always been active regarding the question of historical justice. Indigenous peoples have, as a common experience all over the world, colonization-- the fact that they are the result of a process of colonization and that expropriated them of a form of life.

For indigenous peoples, the issue of history and historical justice is of enormous significance. This raises a significant challenge for truth commissions, because truth commissions typically were created to deal with crimes and violations that took place five years ago, ten years, twenty years ago. But for indigenous peoples, the violations have taken place over centuries.

So I think that the encounter between the movement for the rights of indigenous people and the transitional justice field is high view, and certainly is enormously promising and productive.

On the 12th of February the Maine Truth Commission will hold the seating ceremony, where the commissioners will be officially appointed. What issues is this truth commission looking into, and what is its importance and relevance in the broader context of the rights of indigenous peoples in the United States?

In Maine, the emerging truth commission has been created by the five indigenous tribes and the government of the state. The commission of Maine is centered on understanding the experiences of the different actors involved in the child welfare system, on a human and psychological description of experiences.

This is not a truth commission in the classic model of a process heavily marked by working with archives and producing a number of books. This is more a commission based on the actual living memory of people, in ceremonies that give meaning to the experiences of people, and very focused on orality and performance.

On the 11th and 12th of February they are launching a process of prayer, meditation, and reflection to accompany the seating of the five commissioners.

The TRC of Canada is examining one particular issue-- the abuse of children in residential schools-- that illuminates a wider issue: the attempt to assimilate forcibly the indigenous population, and the attempt to homogenize Canada, disappearing identities that are outside of the dominant identity.

The Truth Commission of Maine is doing something very similar: addressing one specific issue—treatment of indigenous children by the child welfare institutions -- but it's trying to throw light over issues of marginalization, over issues of discrimination, over specific issues that cast some light on race relations in the state of Maine.

The Truth Commission in Canada is addressing an issue that happened on a much wider scale, and is related to the experiences of children who went through the so-called Indian Residential Schools. That has to do with a system that took place over a hundred years and in the entire territory of Canada, affecting a wide number of First Nations, Metis people, and Inuit populations.

So, the scale is a big difference. In the case of Maine, they will be examining issues regarding the child welfare system after 1978, dealing with five indigenous populations that are based in the state of Maine

The other difference is that in the case of Canada, the residential schools were administered by churches in cooperation with the state. In the case of the state of Maine, they are working directly with a state child welfare program, without the participation religious institutions.

In both cases the commissions emerged as the result of a negotiated encounter and dialog between indigenous and non-indigenous. The difference is in the actual procedure.

The concept of reconciliation is very important to both these commissions. They do not talk about national reconciliation, because obviously we are not talking about one nation but about persons who belong to different nations. First Nations in Canada happen to be in the territory of Canada, but they do have sovereignty, and the same applies to the nations in the state of Maine.

How do you think indigenous peoples truth commissions can involve a broader spectrum of society, to execute their mandate of educating the public?

Education is one of the most critical functions truth commissions have, and they must not lose sight of that. But education is also their single largest and most complicated challenge.

As a result, whatever comes from indigenous peoples tends to be ignored, not believed, or will simply fall on deaf ears.

So, they have to engage with the educational and the pedagogic communities of their countries. During the time of the work of the truth commission, commissions need to work out to the population to show that what happened to indigenous children is an issue that affects everyone. We have seen in horror in the last few years that the abuse of children in institutions is pervasive. And so perhaps one thing that these two truth commissions can do is to call attention on the fact that the responsibility for the well-being of children is an issue that affects everyone.

ICTJ is involved in policy discussions on how to secure access to justice for indigenous populations. On February 27- March 1, 2013, ICTJ will join Columbia University and the Office of the High Commissioner for Human Rights to bring together some of the leading thinkers, practitioners, activists, and academics to discuss these issues. What is the significance of this particular event, and what outcomes are expected?

The United Nations expert mechanism on indigenous rights is a special institution that which works in cooperation with the Office of the High Commission for Human Rights. They are launching an expert consultation to deal with experiences of truth and reconciliation and experiences that have to deal with the access to justice. ICTJ is closely engaged with this mechanism.

The event with Columbia University aims to identify lessons, to systematize experiences, and to continue growing the interest of indigenous activists on truth commissions.

One of the most major publications ICTJ has provided on transitional justice and indigenous peoples is the handbook, Practitioner's Resource on Strengthening Indigenous Rights through Truth Commissions. ICTJ will soon publish a Spanish edition of the book. What is the significance of this particular publication?

Since our first engagement with the Canadian TRC, we systematized our knowledge and the ideas that we came across during this process of engaging indigenous experiences, and we launched a handbook called Strengthening Indigenous Rights through Truth Commissions. The book crystallizes recommendations for countries considering truth commissions in the case when indigenous peoples were affected. These recommendations are also for indigenous peoples on how to use the tool of a truth commission to assert their rights.

The Spanish version is very significant because many truth commissions in Latin America stumbled across the fact that enormous violations had been committed against indigenous peoples.

We think that the handbook will help indigenous peoples adopt an additional tool in their repertoire of instruments for fighting for their rights.

Receive ICTJ updates your inbox each month by signing up for our newsletter. To track ICTJ's work on justice for indigenous peoples and other pressing issues in the field of global transitional justice, connect with us on our Facebook page and Twitter feed.

PHOTO: A priest from the Guatemalan Mayan community prepares to perform a traditional ritual at the archaeological park of Kaminaljuyu (Hill of the Dead in Quiche) in Guatemala City, 30 January 2008, in commemoration of the 1980 fiery assault by local security forces on the Spanish embassy that left 39 dead, including Nobel Peace Prize Winner Rigoberta Menchu's father. EITAN ABRAMOVICH/AFP/Getty Images