Victims of Tunisia’s dictatorship shared their stories publicly on November 17 in a historic moment for the country. The Truth and Dignity Commission (TDC) - charged with investigating gross human rights violations in the country since 1955 committed under the dictatorship - held its first public hearings in Tunis, gathering victims to testify to their experiences under dictatorship. The hearings present an essential opportunity for the country to confront its painful past. Since its inception in 2014, the TDC has received over 62,000 submissions and heard testimony from about 11,000 people. 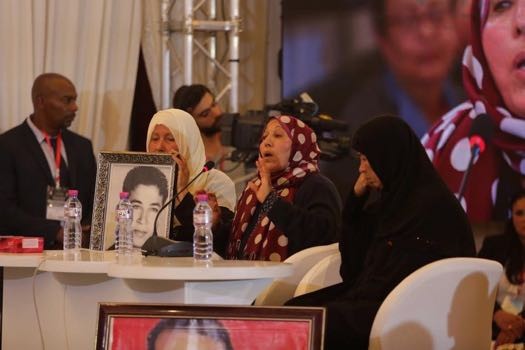 This is about Day 1 of the TDC's public hearings. Watch Day 2 here

A mother who wants, above all else, to bury her son. A prisoner for whom torture became a matter of routine. A survivor who watched the government kill his friends and fake the circumstances of their deaths.

Victims of Tunisia’s dictatorship shared their stories publicly on November 17 in a historic moment for the country. The Truth and Dignity Commission (TDC) - charged with investigating gross human rights violations in the country since 1955 - held its first public hearings in Tunis, gathering victims to testify to their experiences under dictatorship. The hearings present an essential opportunity for the country to confront its painful past. Since its inception in 2014, the TDC has received over 62,000 submissions and heard testimony from about 11,000 people.

Thousands of viewers and listeners tuned in on national television and radio, joined by a worldwide audience through digital streams in English, Arabic, and French. TDC President Sihem Bensedrine began the evening by addressing the audience, imploring them to listen to the victims’ stories and committing to justice on their behalf.

“Tunisia shall no longer accept human rights violations, nor shall this land leave ground for impunity: this is the prerequisite for a genuine national reconciliation,” Bensedrine said. “Today, the victims of despotism are fully entitled to justice and fairness. This is the message Tunisia is about to convey to the entire world.”

After Bensedrine’s opening remarks, victims took the floor. The proceedings were divided into two sections: women who lost loved ones during the dictatorship or the revolution, followed by survivors of torture.

Latifa Matmati was among the women who spoke. Her husband was killed in 1991, but she did not find out about his death until 2011. For years in between, she brought clothes for him to the police station she believed he was held, but the police did not inform her of his fate.

She went to the police office to bring clothes to her husband during three years. They did not tell her he was dead #Tunisia #IVD pic.twitter.com/IAbWHdAjGU

Other women spoke of their lost sons, and how they still have not seen the remains. They want, more than anything, a proper burial and mourning. Some also explained their desire for their loved one’s death to be recognized in history.

"I know to God he's a martyr, to me he's a hero, but I want it written down in history,” said Fatima, the mother of Anis Alfarhani.

They also cited their anger with the justice system, and how it pains them to see their loved ones’ murderers walk free.

"The killer of my son, I know him personally, I know where he works,” Fatima said. “But the court didn't do anything for us.”

After the women concluded their testimony, two victims of torture spoke about their experiences. Sami Brahim explained how torture was used to coerce false confessions under the dictatorship.

"Everything that's happened in Abu Ghraib and prisons around the world has probably happened in Tunisia," Brahim said.

Brahim added that he is ready to forgive his torturers, but that forgiveness must be accompanied by an explanation of why he was subjected to it. To him, it is essential to shed light on this period of Tunisian history.

"I want this to be written down in history, this dark period. I don't want this to happen to anyone's daughter or son," Brahim said.

The evening concluded with testimony from Gilbert Naccache, a prominent leftist opposition activist who was arrested multiple times under the dictatorship. He spoke to the normalization of torture while in custody: “You get used to it – 3, 4 days a week are painful,” he said.

Naccache ended his testimony by explaining why he chose to speak. Echoing voices throughout the evening, and from the Tunisian revolution itself, he said: "Truth, whatever we do, is revolutionary"

The hearings generated strong reactions among the audience in the building and across the world.

Viewers emphasized that the fight for justice must continue beyond the hearings.

Tonight, I'm proud of my country and happy to have lived to see this moment. But this mustn't stop here. #IVD #IVD2016 #Tunisia

*PHOTO: Victims testify before the Truth and Dignity Commission during the first day of public hearings. (TDC)*
Middle East and North Africa
Tunisia
Truth and Memory