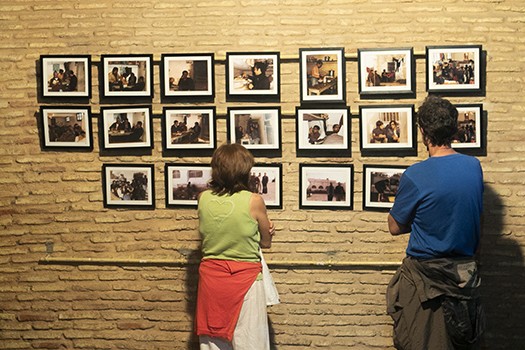 Tunis, September 24, 2018—On Saturday, the International Center for Transitional Justice and the University of Birmingham launched Voices of Memory, an interactive exhibition inspired by a group of nine Tunisian women from across the country and from different generations. It is the first collective testimonial of Tunisian women who experienced the impact of repression under the Ben Ali regime. A diverse audience of 150 Tunisian residents attended the long-anticipated opening of the exhibition. Attendees were also joined by national and international representatives, including Carol McQueen, the Ambassador of Canada to Tunisia, Louise de Sousa, the British Ambassador, and Teresa Albero of the Office of the High Commissioner of Human Rights in Tunisia.

The participatory art project, which has been over a year in the making, uses several mediums to communicate these women’s stories in an effort to raise public awareness and catalyze discussion about the relevance of these past experiences on Tunisia’s present and future. A unique museographic experience incorporating illustrated narratives and written testimonies, as well as soundscapes and audio recordings, the project is also the first artistic collaboration of its kind in Tunisia. Marouen and Taieb Jallouli designed the scenography, with lighting by Ahmad Bennys, sound by Wissam Ziadi, and contemporary works by several Tunisian artists.

I was not imprisoned inside tight walls behind iron bars but I was imprisoned outside. Apparently, I was conducting a normal life but in reality I was caught up in a vicious circle, waiting for my turn to be arrested, going from one police station to another to sign information cards...What happens behind bars and even outside prisons used to be taboo, nobody dared talk about it; all we could do was to hint at it in secret gestures. Today, we [are] liberated from our fear and from the psychological restraints that used to oppress us...It is essential that we remove the divide that affected families due to the oppression they had endured, which doubled their suffering. — Khedija Salah, one of the nine women participants

In an effort to inspire visitors to envision a more just future for Tunisia, the women chose as the central motif for the exhibition the “Koffa,” the traditional Tunisian basket used to bring food to political prisoners.  The Koffa, generally prepared with love and loaded with unwritten messages, was often arbitrarily denied to prisoners. It thus represents a loved one’s offering and a protest to forced separation.

“The power of this collective work of art lies in its ability to document and unveil hidden human rights violations endured by women in Tunisia under the dictatorship, including wrongful imprisonment, constant surveillance, physical and sexual abuse, and other violations,” explained ICTJ’s Virginie Ladisch. “By highlighting the everyday erosion of dignity caused to women, the artwork stands as a living testimony to exclusion and oppression experienced across society, and promotes a deep understanding of the shared humanity of the other.”

As visitors walk through the exhibition, they experience the sights, sounds, and even smells of a prison cell. In a designated reflection room, those witnessing the exhibit are encouraged to share and record their own stories of confinement or repression. Through this distinctively interactive experience, the project engages citizens in a dialogue about the universality of women’s experiences. Ultimately, it seeks to build a bridge between generations, genders, and political and social divides, reminding Tunisians of the humanity of the other, and the equality of all citizens.

“This exhibition asks us to reflect on what kinds of stories we focus on when we talk about legacies of harm both in Tunisia and the world, what experiences we consider significant enough to tell,” remarks Dr. Christalla Yakinthou, of the University of Birmingham. Together with ICTJ, the university served as a key implementing partner for the project.

“This project is a significant contribution to advancing inclusive civic discourse at a critical point when Tunisians are waiting for the final report of the Truth and Dignity Commission, as the culmination of the transitional justice process in Tunisia,” said Salwa El Gantri, Head of ICTJ’s Tunisia Office. “It also represents an opportunity to highlight the economic impact of repression in women’s lives and the long-term consequences on their families, none of which have been adequately addressed in Tunisian collective memory.”

The Voices of Memory exhibition is made possible by the generous support of the Government of Canada, the Grand Duchy of Luxembourg, the University of Birmingham, and the Economic and Social Research Council’s Impact Acceleration Account.

PHOTO: Visitors view artwork on display at the Voices of Memory exhibition in Tunis. (ICTJ)