Following the recent closure of ICTJ's office in Côte d’Ivoire, we caught up with Head of the Office Mohamed Suma and Senior Expert Cristián Correa to reflect on ICTJ’s work in the country and with victims, women, and youth, as well as the reasons why ICTJ has chosen to scale down its activities. 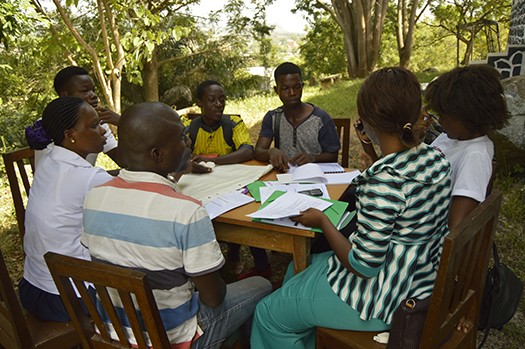 Côte d’Ivoire is still grappling with past political violence rooted in ethnic divisions. After the presidential election in 2010 when then President Laurent Gbagbo refused to concede after Alassane Ouattara’s victory, civil war broke out. Actors on both sides of the conflict committed extrajudicial killings, torture, and sexual violence. Women and children, in particular, were the targets of human rights abuses. The violence left 3,000 dead and over a million people displaced.

In 2012, President Alassane Ouattara swore in the Commission for Dialogue, Truth, and Reconciliation, and the government began taking steps to bring perpetrators of the 2010-2011 political violence to justice. President Ouattara later established the Special Inquiry and Investigative Unit to investigate and prosecute crimes committed during the crisis, as well as the Ministry of Solidarity, Social Cohesion, and Victims Compensation, promising reparations to victims of the violence. However, the administration has been reluctant to fully implement accountability measures and to follow through on the truth commission’s recommendations for acknowledgment and reconciliation. Moreover, the reparations process has been repeatedly stalled, leaving victims wondering whether they are eligible for reparations and if they will ever receive them. Now, the country faces a new political crisis with the untimely death of Prime Minister Amadou Gon Coulibaly, who was a strong candidate to replace President Ouattara, on July 8, and as avid supporters of former President Gbagbo clamor to file his candidacy in the upcoming presidential election in October, despite his being barred from the race.

Notwithstanding these recent political developments, ICTJ closed its office in Côte d’Ivoire on July 1 after eight years of operation. ICTJ’s communications intern, Yuko Yokoi, recently caught up with Mohamed Suma, ICTJ’s head of the office in Côte d’Ivoire, and Cristián Correa, ICTJ’s senior expert on Côte d’Ivoire, to reflect on ICTJ’s work in the country and with victims, women, and youth, as well as the reasons why ICTJ has chosen to scale down its activities. The two shared their experiences and discussed the country’s transitional justice process, its achievements, the challenges it faces, and its future prospects.

Yuko Yokoi: Firstly, how would you summarize ICTJ’s work in Côte d’Ivoire over the past eight years?

Mohamed Suma: In Côte d’Ivoire, we focused on bringing together all the transitional justice measures in an integrated way, especially in the creation of the country program. Truth-seeking processes can be built upon reparative measures. We can use truth-seeking measures to facilitate dialogue and reconciliation. Accountability measures can be used to put in place policies that prevent repetition of future human rights abuses. This was our approach when we first came to Côte d’Ivoire.

At the initial stage in 2012, the government was receptive to transitional justice, so ICTJ provided training on transitional justice and technical support to policymakers, practitioners, and potential partners. ICTJ also strengthened capacity of civil society, especially victims’ groups, to engage with government authorities. Since civil societies were divided in terms of ethnicity and regions, we tried to open our doors to everyone to ensure inclusivity and integration to effectively galvanize the civil society organizations.

Since our initial strategy was to enact policy changes in the government, ICTJ also closely worked with international NGOs and international organizations, in particular, the UN and embassies that have leverage over the government, providing technical support to exert pressure on the national authorities.

Yuko Yokoi: What were some of the achievements?

Mohamed Suma: We helped the government design policies and understand transitional justice concepts. We also helped victims’ groups think strategically and transform their anger and grievances into demands for real political change. Additionally, ICTJ engaged victims, especially youth groups, directly with local government officials. Consequently, victims were able to provide critical analysis and exert pressure on the government. We are particularly proud of how victims are now able to effectively engage with authorities to fulfill their rights for reparations because we are not going to be here assisting them forever.

Cristián Correa: I want to add that ICTJ encouraged a registration process for victims, which helped victims feel more entitled to justice and reparations. That was a success. The truth commission also listened to the victims more than they had planned to. On a higher level, ICTJ worked closely with the judiciary and the prosecutors and provided technical support on how to create laws that protect the victims and witnesses.

Yuko Yokoi: What were some of the challenges?

Mohamed Suma: One of the challenges was that the government provided blanket amnesty to the perpetrators of past human rights abuses, with only a few exceptions. Those who have been prosecuted were officials from the opposite side of the conflict. Moreover, the indictments were mainly issued for economic crimes and crimes against the state and not for crimes against humanity.

Another challenge was the long-standing societal divide: Côte d’Ivoire is polarized from years of ethnic and regional conflict. There was a lack of trust not only between the citizens and the government but also among communities. Politicians have also instrumentalized youth to commit violent crimes. This is why we tried to bring together civil society organizations and victims’ groups with diverse ethnic and geographical backgrounds.

Cristián Correa: The legacy of recurring violence and political influence on the prosecutors were challenging. Although the government showed interest in implementing transitional justice mechanisms in the beginning in 2012, we later realized that the government’s commitment to address pass atrocities was not sincere. Our efforts to build close relationships with commissioners and provide technical advice could not break the president’s political influence over prosecutors and commissioners. So, we explored different avenues including engaging economically marginalized people and making sure they had access to and a say in the discussion. By engaging poor communities, we were able to overcome the class divide in addition to ethnic and regional divides Suma mentioned.

Yuko Yokoi: Why is ICTJ closing down the office? What circumstance or context have led to that decision?

Cristián Correa: The two main reasons [for closing the office]—financial and the lack of political will in the government—are interconnected. The financial issue was brought on by the lack of political interest of the international community, which was influenced by the government. The UN and international donors were actively engaged in Côte d’Ivoire during and immediately after the conflict before 2010 and after the 2010 election. However, the government’s efforts toward reconciliation, which was victor’s justice in our eyes, coupled with economic growth, were viewed as success by the international community. Therefore, international policymakers and major donors lost interest in further tackling the issue of division in society and pursuing accountability for and acknowledgment of past atrocities in the country, especially after the UN mission left.

Mohamed Suma: In addition, the Ministry of Solidarity also became less reliable over time. The ministry initially promised to involve civil society and implement reparative measures that were transparent and accessible to support children, orphans, and widows with health care, education, and other social services. However, the ministry watered down their commitment down the line. The list of victims was never published, which has completely halted the reparations program; so, the victims do not know if they are going to get reparations or not.

Yuko Yokoi: How will ICTJ continue its work in Côte d’Ivoire?

Yuko Yokoi: What would you say are the future prospects for transitional justice in Côte d’Ivoire?

Cristián Correa: I echo what Suma has said, that not much can be expected at this point. There are not enough checks and balances or fair representation in the parliament. Nevertheless, there is hope because of the increasing visibility of victims’ groups, especially youth groups, that have been strategically organizing and putting pressure on the government. ICTJ has been exploring different avenues with them and has supported youth groups in engaging with traditional leaders and religious leaders and has connected smaller, grassroots civil society organizations with more prominent, traditional ones that have more influence. As the traditional leaders and religious leaders considered reconciliation and reparations important for national unity, they helped amplify the voices of victims and put pressure on the representatives in the government. I have hope that this could lead to a long-term process.

Yuko Yokoi: Suma, you’ve worked in Sierra Leone and Liberia in the past, what do you think are some of the unique challenges and opportunities or advantages in Côte d’Ivoire from a comparative perspective?

Mohamed Suma: In both Sierra Leone and Liberia, the truth commission served as an instrument for dialogue, reconciliation, and reform of national institutions, but the truth commission in Côte d’Ivoire did not integrate victim’s voices. The process was not transparent and was politicized. Moreover, in Sierra Leone for example, trials were used as a deterrent to prevent future heinous crimes, but that is not happening in Côte d’Ivoire where accountability measures are not taking place.

Yuko Yokoi: Cristián, how has your extensive work in various countries including Chile, Colombia, Peru, and Sri Lanka, among others, helped your work in Côte d’Ivoire?

Cristián Correa: It was not only my work but also our colleagues’ experiences in the Americas and other African countries that have helped us shape our work in Côte d’Ivoire immensely. My experience working with rural and poor communities in Chile and Peru as well as one of our colleagues’ work in Tunisia with female victims contributed to our work in Côte d’Ivoire to include the voices of women from poor communities in the transitional justice process. In addition, on the topic of reparations, we drew knowledge from the examples of Peru and Colombia where a simple registration system for victims to get economic and psychosocial support as well as health care is well set up. We also learned from Kenya to help victims and marginalized communities strengthen connections with religious leaders as they can serve to bridge the gap between victims and authority figures so that victims’ voices are reflected in policies and institutional reform.

Yuko Yokoi: Lastly, working in Côte d’Ivoire for eight years, what is your fondest memory?

Cristián Correa: As we worked to bring together victims from various geographical regions and socioeconomic backgrounds and learned how difficult it was for some of them to be in the same room, I was very impressed by the courage they had to work with opposite sides of the conflict. It was very moving to see them moving past their historical grievances and fears, breaking ethnic, class, and regional barriers. It was truly encouraging and exciting to see women, who voiced their demands to male authorities and received backlash from them, stand strongly and confidently with their technically savvy proposals.

Mohamed Suma: Since Côte d’Ivoire is a polarized place and the perpetrators in one region are also the victims in another region, it was powerful to see those from the opposite sides of the conflict work together, instead of finger pointing or fighting against each other. ICTJ helped them to focus on a larger goal—basic reparations from the government—that unites all victims. In the end, we were very proud of their proposals, which encompassed the interests of the diverse group of victims.

PHOTO: ICTJ and the youth-led Justice and Peace Action Network hold a consultation with Ivorian young people in a region outside the capital about their role in the country's political violence and their participation in the transitional justice process. (ICTJ)