Finding Hope Across Continents of Pain 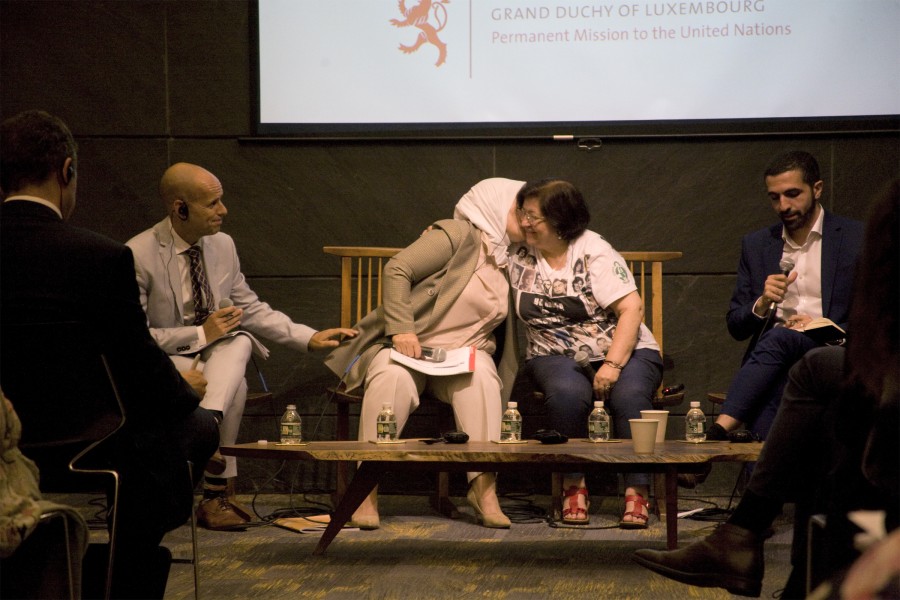 On September 15, ICTJ organized a side event on the missing and disappeared in Syria, sponsored by the governments of Luxembourg and Finland, during the 77th session of the United Nations General Assembly. The event was a timely one, as it addressed a recent proposal for the creation of a new international body on the missing in Syria put forward by the UN Secretary-General (UNSG) in a report pursuant to UN General Assembly resolution 76/228 on the situation of human rights in the Syrian Arab Republic.

This new international body would be mandated to “clarify the fate and whereabouts of persons reasonably believed to be missing ” in Syria and to provide support to victims and their families, many of whom have been waiting for word about their loved ones since 2011, some for even longer. It would build on existing mechanisms for Syria, including the Independent International Commission of Inquiry (COI) and the International, Impartial and Independent Mechanism, but with a standalone humanitarian mandate.

The side event—“Ensuring the Role of Victims and Families in Search Processes for the Missing and Disappeared in Syria”—brought leaders of Syrian and Colombian victims’ groups and family associations together with international experts and representatives from the Colombian government. The panel was moderated by Fernando Travesí, ICTJ’s executive director, and included Aminah Kholani, founding member of Families for Freedom, Syria; Ibrahim Olabi, barrister at Guernica 37 and chair of the Syrian Legal Development Programme; Luz Marina Monzón, director of the Colombia’s Unit for the Search of Disappeared Persons; and Gloria Gómez, leader of the Relatives of Victims of Forced Disappearance Movement and director of the Association of Families of the Detained and Disappeared.

The following presents the discussion’s key points on what the proposed international body would mean for Syrian families, how it should operate, its role, and the likely challenges.

The plight of the missing and forcibly disappeared and their families is a pressing global issue, with hundreds of thousands of people missing in at least 85 countries around the world. In Syria alone, according to data collected and verified by Syrian civil society, more than 100,000 people have gone missing or been forcibly disappeared since 2011, many at the hands of the government’s security and intelligence services, but also as the result of abductions and arbitrary detentions by nonstate actors, combat operations, and tragedies along migration routes. Families of the missing, both inside and outside Syria, feel the consequences of those losses every day.

As Aminah Kholani explained, for over a decade now, the search for the missing in Syria has been filled with “pain and feelings of injustice” and many dangers, in fact “too many to count.” Female relatives, especially those without a male supporter, face threats and violence, the risk of detention, exploitation, and extortion when they search for their loved ones, and generally experience reduced economic opportunities and high rates of poverty.

The UNSG report represents a potential important step toward a solution to this tragic situation. Based on broad consultations, it proposes “a stand-alone entity focused entirely on clarifying the fate and whereabouts of missing persons related to the Syrian Arab Republic and on adequately supporting families.” It offers actionable recommendations for the Syrian government, existing mechanisms on Syria, member states, the international community, and international and Syrian organizations and victims’ groups. However, the Syrian government has so far opposed all international mechanisms as “unlawful” on the grounds that they violate its sovereignty and are part of a larger “interventionist agenda.” Most recently, it voted against resolution A/HRC/51/L.18, which among other things referenced the UNSG report and “the unique impact on the families, in particular women and children,” contending that its “technical nature go[es] beyond the competence of the Human Rights Council.”

As Fernando Travesí noted, the UNSG report is first and foremost “an achievement of the Syrian families’ associations and of the victims’ groups who have been documenting and advocating for justice in Syria since 2011, including in the Truth and Justice Charter.” It is “also an achievement for the UN system itself,” he added, in particular the COI, which first called for such a mechanism, and the Office of the High Commissioner of Human Rights, which assisted with the consultative process and report.

The Need for an International Entity with a Dedicated Humanitarian Mandate

An international body with a humanitarian focus, explained Ms. Kholani, could serve as a hub for tens of thousands of families and offer them not only hope but also “a sense of trust.” Families of the missing and disappeared have long sought after this sense of trust and safety, and it is of critical importance to them.

Colombia’s Unit for the Search of Disappeared Persons (Unidad de Búsqueda de Personas Desaparecidas in Spanish, or UBPD), which was created as an autonomous, extrajudicial mechanism, has such a dedicated humanitarian mandate. The UBPD’s head, Luz Marina Monzón, stressed the vital role it is playing for the families of Colombia’s more than 100,000 disappeared persons. “Over many years, families had been knocking on doors. They had been asking for obstacles to be overcome,” she said. The UBPD is part of Colombia’s Integrated System of Truth, Justice, Reparation, and Non-Repetition, but operates independently from and parallel to criminal processes underway in the system’s Special Jurisdiction for Peace. Thus, neither the search nor the victims, said Ms. Monzón, are “subordinated to criminal charges.” Because the search is “crucially a humanitarian measure, essentially a humanitarian task,” she continued, “you cannot carry out a search that excludes the victims of the search.”

Gloria Gómez, who has dedicated her life to helping families of the missing and disappeared in Colombia after her brother was forcibly disappeared, tortured, and murdered, expanded on this point. Searching “is a right,” she declared. “[It] is part of truth and justice. One cannot exist without the other.” Though, she said, “It’s not just searching. It’s finding them.” Only then, is the pain mitigated. “Of course, the pain will never disappear,”  she continued, “but the need for an answer is forever with us and accompanies us until we are able to find the truth.”

Reflecting on families’ intense and painful need to know the truth, Ibrahim Olabi said that “many families are begging to know that their loved one is dead.” While emphasizing that accountability through legal processes is an essential form of justice, he also asserted that it is essentially “backward looking” as it fails to address “the pain that is ongoing.”

Keeping Victims at the Center of the Process

Luz Marina Monzón also reminded the audience that families do not begin their search when this type of institution is established. They most likely have already been searching for quite some time. Therefore, such a mechanism must work closely with families and build on their search efforts, knowledge, and experience. As mentioned in the UNSG report, by collaborating with victim organizations, the proposed international body can earn the trust of family members and in doing so serve as a form of support. It can also help prevent family members from telling their painful stories repeatedly and any resulting re-traumatization.

Victims and the organizations that serve them know best their specific needs and expectations. Therefore, a search mechanism that is created without victims’ participation is basically set for failure. As Gloria Gómez articulated, institutions can support victims by placing them at the “center of the search,” and she encouraged those working with victims to “listen, but also to act.” Psychosocial support, for instance, is critical for families if they are to continue their search and journey toward what Ms. Gómez called “living and healing memory.”

Healing, according to Ms. Kholani, comes in part through solidarity with other victims who are “living the same condition.” She explained, “[It] is a kind of psychological support, at least for me.” Before the side event, she said, “I was going to resign from all work in public affairs.” She changed her mind, however, when she joined together with others like Ms. Gómez in common cause. “Today, I received a very important dose of trust and confidence. You can't imagine my mixed feelings,” she said. “I've not met her before. She is from a different continent. However, we are united by one continent, the continent of pain. The continent of hope as it was.”

Importantly, the new international entity, if established as proposed, would offer victims and their families “comprehensive support” to address their “multifaceted needs—psychosocial, legal, administrative, economic and commemorative,” whether or not the Syrian government agrees to cooperate. The new entity will likely enlist other organizations such as the International Committee of the Red Cross and the International Commission on Missing Persons to help implement its mandate, as well as civil society groups and victim and family associations, which the UNSG report calls “critical partners” for “all work on the issue of missing persons.” As such, the new institution would “serve as a point of entry for survivors and families, and provide a framework for existing actors to continue and coordinate their work.”

At long last, victims, victims’ groups, family associations, and civil society will not be left alone to fend for themselves. Instead, their work and the solidarity it promotes, as Ms. Monzón put it, can “generate trust within a context where there is no trust, [and within] an institution that it is not able to find it by itself.”

Listen to the full recording of the side event here.