2020 was a year of unforeseen hardships throughout the world. We may wish to write off last year as a loss and move forward. However, looking back on it as we do in this 2020 Year in Review, in which we highlight our most read content, we can find and take heart in important victories and apply lessons learned in 2021 and beyond. 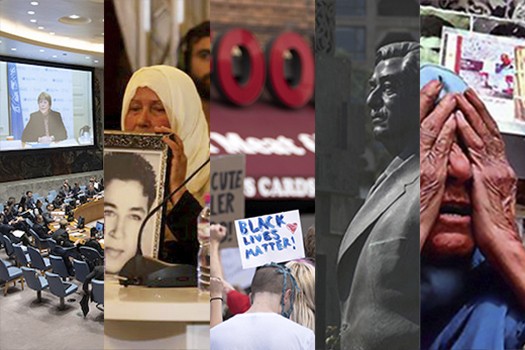 2020 was a year of unforeseen hardships throughout the world. The global COVID-19 pandemic introduced numerous unprecedented health, social, and economic challenges, but it also uncovered and exacerbated existing inequalities, injustices, and other root causes of conflict and violence. While it is still early, 2021 has already shown signs of another tough year ahead. We may wish to write off last year as a loss and move forward. However, looking back on it as we do in this 2020 Year in Review, in which we highlight our most read content, we can find and take heart in important victories and apply lessons learned in 2021 and beyond.

Last year, as the pandemic unfolded, we stressed in all our work the importance of pursuing justice even in face of the deadly coronavirus disease and the social and economic restrictions put in place to curb its spread. While countless millions around the world have endured devasting losses and setbacks, the most vulnerable populations, especially those in societies emerging from conflict or repression, have borne the brunt. By far our most popular pieces in 2020, Justice in the Era of COVID-19: Our Global Responsibility and Special Report on COVID-19: Keeping Justice in Sight delve into these issues, maintaining that responding to the global health emergency and pursuing justice are by no means mutually exclusive. Unfortunately, the concerns we voiced early on in the pandemic have materialized: The rollout of life-saving vaccines and other medical treatments, developed at breakneck speed and through unprecedented international collaboration, has been uneven, and people in developing countries, particularly vulnerable groups, are still far from having access to them.

Meanwhile, racial tensions in the United States reached a boiling point when Minneapolis police officers brutally murdered yet another unarmed Black man, George Floyd, igniting months of protests against racial injustice across the county and around the globe. In Here We Are Again: Will Racist Violence in the United States Ever End?, ICTJ’s executive director reflects on these events, the country’s long history of institutional racism and white supremacy, and what can be learned from transitional justice processes in other parts of the world.

In February, the United Nations Security Council held its first ever open debate on transitional justice. The well-attended event generated a vibrant exchange and indicated a growing interest in and understanding of transitional justice within the international community. In International Community Commits to Nuanced, Comprehensive Transitional Justice at UN Security Council Open Debate, ICTJ presents some promising findings from a detailed qualitative analysis it conducted of the statements made by member states and other participants.

For Lebanon, 2020 was especially crushing, as its years-long economic crisis deteriorated further in the pandemic, pushing the country to the brink, and a massive explosion in Beirut’s port killed hundreds, injured thousands more, and sent the government into a tailspin as Lebanese people demanded answers. Yet against this grim backdrop, progress was made toward truth and justice. In A Step Closer to Uncovering the Fate of Loved Ones: Lebanon Forms a Commission for the Missing and Forcibly Disappeared, ICTJ explains what the long-awaited appointment of the commissioners means, almost a year and a half after passing Law 105 for the Missing and Forcibly Disappeared Persons, and the challenges that lie ahead. The Special Tribunal for Lebanon also delivered a controversial conviction in a case involving the assassination of former Prime Minister Rafik Hariri, as we explore in our Op-Ed Justice Served? The Special Tribunal for Lebanon Renders Its Long-Anticipated Judgment, nearly two decades after the deadly car bombing.

In Tunisia, the Truth and Dignity Commission published its final report, six years after it began its work. Now that the commission’s findings and recommendations are publicly available, as  ICTJ explains in After the Truth Commission, Tunisia Must Pursue Inclusive Transitional Justice, the country still has much work to do.

Back in March, the International Criminal Court (ICC) heard closing arguments in the case against Dominic Ongwen, a former commander in the Lord’s Resistance Army, a guerrilla group that formerly operated in Northern Uganda, who faced 70 counts of war crimes and crimes against humanity. Recently, the ICC issued its judgment, finding Ongwen guilty of 61 of the counts. In her March 2020 Op-Ed The Trial of Dominic Ongwen: Has the Time for Accountability for Sexual Crimes in Contexts of War Finally Come?, ICTJ’s head of office for Uganda examines what was at stake in the case and what the verdict would mean for jurisprudence on gender justice and accountability for sexual crimes in contexts of armed conflict as well as for the victims of the sexual crimes perpetrated in Northern Uganda.

Our experts weighed in on the latest world events in our monthly newsletter’s Expert’s Choice column. Several of these commentaries made our most read list, including Don’t Call It ‘International Justice Day,’ which warns against misrepresenting the Day of International Criminal Justice as doing so can have grave social and economic consequences for victims seeking justice. In Who Is Worth a Statue, ICTJ’s Head of Office for Brussels and The Hague reflects on the mass protests across Europe against legacies of colonial rule and racial injustice, and in Groundbreaking International Justice in Germany, our senior expert and litigator unpacks the significance of recent court cases in Germany built on the principle of universal jurisdiction against Syrian and Iraqi nationals suspected of war crimes and crimes against humanity.

A society’s transition from conflict or repression to sustainable peace, justice, and a more democratic future is a long journey that requires patience and dedicated effort on the part of many. Along the way, there are setbacks as well as stunning achievements. Looking back on 2020 and recalling all that happened, we see there is light even in the darkest hour. If together we stay our course, we will undoubtedly gain ground in the pursuit of justice for all.

Victims testify before the Truth and Dignity Commission during the first day of public hearings. (TDC)

Protesters gather in front of Cup Foods, outside of which George Floyd was killed, on May 26, 2020, the day after his death. (Lorie Shaull)

A memorial to Prime Minister Rafik Hariri stands at the site in Beirut where he was assassinated. (Adeeb Farhat, August 18, 2020)

For decades, family members of the disappeared in Lebanon have been demanding to know the truth about the fate of their loved ones. (from the archives of the Committee of the Families of the Kidnapped and Missing in Lebanon)