After the Truth Commission, Tunisia Must Pursue Inclusive Transitional Justice

Tunis, July 10, 2020—The Truth and Dignity Commission’s (TDC) final report was at last published on June 24, six year after the TDC began its work. It marks an important milestone in Tunisia’s transition, but the journey ahead to justice and democracy is a long one. Policymakers and practitioners now have the responsibility to take the next step forward. 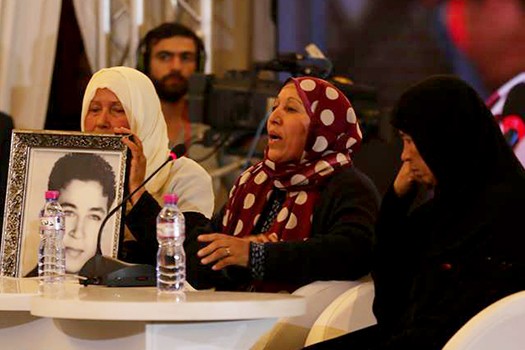 Tunis, July 10, 2020—The Truth and Dignity Commission’s (TDC) final report was at last published on June 24, six year after the TDC began its work. It marks an important milestone in Tunisia’s transition, but the journey ahead to justice and democracy is a long one. The policymakers and practitioners leading the country’s transitional justice process now have the responsibility to take the next step forward. Using the report’s findings and recommendations, they must consult with civil society and the public to shape and adopt policies that advance truth, justice, and dignity in accordance with the country’s 2013 Organic Law on Transitional Justice.

“The publication of the final report represents a form of justice for victims and an acknowledgment of the long years of repression they endured under the dictatorship,” says Salwa El Gantri, head of ICTJ’s Tunisia office. “It is also an official recognition of the institution’s work, the testimonies it collected, and the recommendations it has offered. The state, together with civil society, must now consider what needs to be done so that transitional justice in Tunisia will be more constructive and inclusive.”

One immediate step that the government must take is to make the TDC report accessible to as many Tunisians as possible. “Accessibility means disseminating the report in ways that connect to Tunisian experiences of past abuse as well as to their continuing economic and social grievances,” says ICTJ Senior Expert Ruben Carranza, who has worked on Tunisia since after the revolution.

An important lesson that Tunisia can learn from the experiences of truth commissions in other countries is that a commission’s final report will have limited impact on society if most people do not know what it says. In Kenya, for example, the government was reluctant to widely publish the final report of the country’s Truth, Justice and Reconciliation Commission. Meanwhile, several court cases were brought forward disputing its contents. As a result, the commission’s findings and recommendations never significantly informed policy debates on reparations, marginalization, accountability for corruption, police reform, and elite-led “reconciliation” initiatives.

Moreover, it is not enough to simply publish a truth commission’s report. If the only version available is the official and usually voluminous version one or it is not translated into local languages, people may still not be able to read or understand it. In Peru, for instance, the truth commission’s official nine-volume report was summarized in an illustrated book, entitled Hatun Willakuy, which was made available in three languages: Spanish, the indigenous language Quechua, and later English. Elsewhere, governments and civil society have taken steps to educate children and youth by incorporating the findings of truth commissions in school curricula, cultural activities, and periodic commemorations.

Comply with the Organic Law on Transitional Justice

Article 70 of Tunisia’s Organic Law on Transitional Justice requires the government, “within a year” of the release of the TDC’s final report, “(to) prepare a plan and work programs for implementing the recommendations and proposals presented by the Commission.” The law calls for this plan to be submitted to “a special committee in parliament” that will conduct its work “with assistance from relevant organizations.”

What this means in practice is that the government must review the report and identify which among the TDC’s recommendations it can and will prioritize, given its capacity and resources. In its review, the government must keep in mind that reparations and accountability for human rights violations and corruption are equally fundamental and indispensable components of the process, as reflected in the Dignity Fund and Specialized Chambers, respectively, created by the Organic Law, alongside the TDC.

“In deciding its priorities, Tunisia should consider that the outcomes and goals of its transitional justice measures are, or can be, interconnected,” says Carranza. “For example, holding individuals accountable for corruption not only means prosecuting them before the Specialized Chambers, but recovering their ill-gotten assets; these ill-gotten assets can then be used to help fund reparations through the Dignity Fund, which in turn can improve access to livelihood in marginalized regions.”

The COVID-19 pandemic and its impact on Tunisians’ access to health care and livelihoods should also be considered. “The government must recognize that victims of the dictatorship carry two burdens: the economic and health impact of marginalization and human rights violations and the economic and health impact of the pandemic,” explains El Gantri.

No matter what the government should prioritize the gross human rights violations that the TDC examined and the measures it recommended. In doing so, it can maximize its current capacity and resources, while confronting some of the root causes and consequences of the Ben Ali dictatorship.

That said, the TDC’s findings and recommendations alone are not the only source of ideas for pursuing accountability and preventing the recurrence of repression and massive and systematic corruption. The extensive evidence, documentation, victim and witness testimonies, and other materials gathered by the TDC, as well as the two 2011 fact-finding commissions on corruption and embezzlement and the events of the revolution, have intrinsic value and should inform current and future policy and initiatives. For this reason, ICTJ also recommends the establishment of an institution mandated to preserve the TDC’s historical record and tasked with archiving and digitalizing this collection of materials and making it accessible to the public and to future generations. As influential Tunisian blogger, activist, and voice of the revolution Lina Ben Mhenni wrote in a blogpost sharply criticizing her compatriots’ “short memory” just before her untimely death in January, “We forget their [Tunisian politicians'] absurdity, corruption, repression, and even violence.” Indeed, only by remembering the past can we guarantee not to repeat it.

PHOTO: Victims testify before the Truth and Dignity Commission during the first day of public hearings. (TDC)