On January 21, ICTJ and UNICEF held a special event to launch an important new report on the links between education and transitional justice. The launch was accompanied by a panel discussion moderated by ICTJ President David Tolbert. 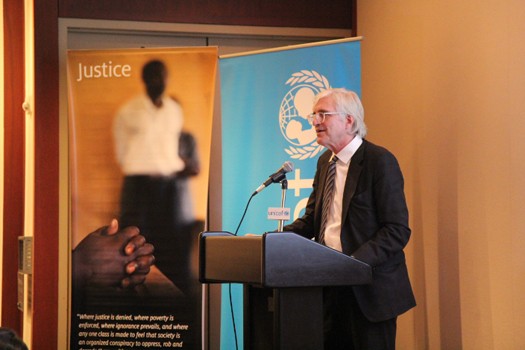 On January 21, ICTJ and UNICEF held a special event to launch an important new report on the links between education and transitional justice. The launch was accompanied by a panel discussion moderated by ICTJ President David Tolbert.

“While communicating an accurate picture of the past occurs in many ways, a fundamental element has to be through education,” said Tolbert. “How a past littered with human rights abuses is addressed in the curriculum is of clearly vital importance. Addressing the past is truly an intergenerational process, and education essential to that process.”

With over 120 people in attendance, ICTJ Senior Research Associate Roger Duthie presented the findings of the report, Education and Transitional Justice: Opportunities and Challenges for Peacebuilding. Duthie stressed that education is an important instrument for remembering and addressing the past that can play a pivotal role in establishing peace and preventing the recurrence of conflict following periods of mass violence.

At the same time, Duthie contended, “A transitional justice framework can help identify the educational legacies of past repression and conflict and shape the reform of the education sector with an eye to preventing human rights violations in the future.”

Duthie also discussed several challenges to including education in a transitional justice framework, including the often common failure to implement truth commission recommendations, the likelihood that capacity in the education sector will have been diminished by conflict, and resistance to changes in education from school workers, policymakers, and students’ parents.

Siegrist maintained that education can help to interrupt intergenerational violence, as the report suggests, but cautioned that it is important not to shift the burden of peacemaking onto children. She also noted that societal divisions can often manifest themselves within school curricula, a challenge that must be addressed when linking education with transitional justice processes.

The final panelist, Henk‐Jan Brinkman, chief of Policy, Planning and Application at the United Nations Peacebuilding Support Office, noted the difficult realities of protracted conflict situations despite UN’s presence in many of these countries. In this connection, he emphasized the need to address the root causes of conflict, one of which can be education if states and communities deliberately choose to not address the violations of the past through it. Brinkman also noted shortage of funding for peacebuilding initiatives within the UN system.

Former UNICEF Deputy Executive Director and Chair of the Early Childhood Peace Consortium Rima Salah delivered opening remarks at the launch. She emphasized the impact that conflict has on children in places like Syria, where over two million children are out of school, and urged the world community to give children a better future.

The report on education and transitional justice is the result of a research project begun by ICTJ and UNICEF over two years ago. The project also includes a book on the subject, Transitional Justice and Education: Learning Peace, which is scheduled to be published in spring 2016. In the months leading up to the book’s launch, ICTJ will be publishing a series of analysis pieces written by practitioners, academics, and experts on transitional justice and peacebuilding focusing on some of the countries examined in the report, including Bosnia and Herzegovina, Lebanon, and South Africa.