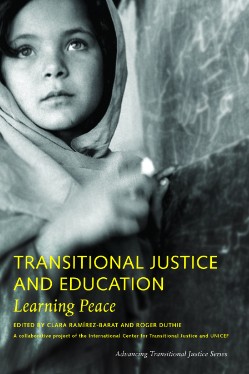 **NEW YORK, November 30, 2016—**A groundbreaking new book from the International Center for Transitional Justice (ICTJ) and UNICEF examines the complicated relationship between education, justice and peacebuilding in societies grappling with a legacy of violent conflict. It offers lessons on how education can be harnessed in a divided society to overcome the past and create the conditions for peace, often under very difficult circumstances.

The edited volume, titled Transitional Justice and Education: Learning Peace, comes at a critical time when many are looking to education as way to help transform society after conflict or political violence. However, many different approaches have been tried around the world so far and few have been fully studied or understood, which is why the book represents such important contribution to peacebuilding and transitional justice.

“The book considers the role that education can play in post-conflict situations, specifically as part of a broad response to a legacy of human rights abuses,” says Roger Duthie, research director at ICTJ and co-editor of the book. “It invites educators, policy makers, human rights practitioners, and others to consider how education can be used in a divided society as a tool of repression and conflict—or of justice and peace.”

Education is as an important component of both peace building and accountability, acknowledgement and reform efforts, especially in countries where the promise of “Never again!” has special meaning.

Several chapters offer new perspectives on how different societies have used education to address legacies of violence, including in forerunners of transitional justice, such as South Africa, Sierra Leone, Guatemala, Chile and Bosnia and Herzegovina. Chapters also look at educational efforts in Northern Ireland, Lebanon, Bangladesh, and Côte d’Ivoire.

The chapters show how reforming education and increasing educational access can be complicated and highly political processes, particularly where years of conflict have destroyed critical infrastructure and frayed civic trust.

“This collection illustrates the importance of ensuring multi-voice narratives in the teaching of history and in memorialization processes. Case studies exploring how education policies can mitigate past injustices—or set the pattern for further injustices—provide invaluable new insights,” says Farida Shaheed, executive director of Shirkat Gah–Women’s Resource Centre, Pakistan, and former UN special rapporteur in the field of cultural rights.

Research shows that educational systems are often entangled in the wider conflicts of society. Closing and destroying schools, for example, are often used as weapons of war. And denying certain groups the right to an equal education, as happened to black South Africans under Apartheid, contributes to stark disparities between populations and intergenerational harms, if not addressed.

Education is also a frequent demand of victims of human rights violations. A chapter of the book on Chile looks at how education was used as a form of reparation. After the fall of the military dictatorship, the new government provided scholarships to victims who had been tortured and repressed by the government. Benefits extended to victims, their children and grandchildren. Lorena Escalona González, who wrote the chapter, argues that educational reform can also form part of social reparation, helping to rebuild the public sphere that was destroyed by the dictatorship.

“Education’s contribution to peace isn’t limited to rebuilding schools and revising curriculums to promote values of tolerance and social cohesion,” said Friedrich Affolter, Education Expert, UNICEF. “It depends on the sensitivity of reforms and programs to addressing the legacies of past injustice, in both the education sector and the broader culture.”

Many chapters make it clear that educational projects — big and small — can be hampered by the difficult realities facing most societies after a conflict. These include destroyed or weakened infrastructures, limited budgets, competing priorities, limited capacities, and ongoing political and social tension.

In Sierra Leone, connecting educational reform to the ongoing transitional justice process proved challenging because the country’s education infrastructure had been severely damaged by war.

Persistent divisions in society can also make educational changes difficult, if not impossible, to achieve.

As the book advocates, education in a post-conflict society should aim to do more than teach students reading, writing, and arithmetic. It should enhance students’ capacity to think critically about the present and the past, and imagine a better future.

The book is the culmination of a three-year research project by ICTJ and UNICEF. It was edited by Clara Ramírez-Barat and Roger Duthie.

The full book is available for free download. For more information on the research, visit the project page.