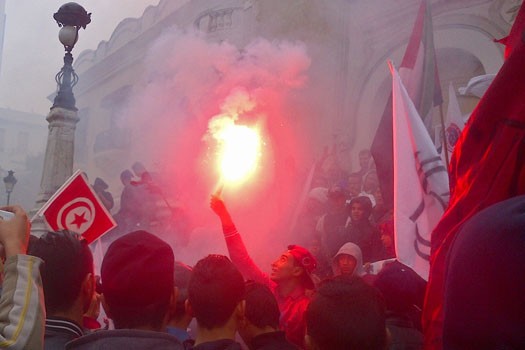 Tunisia has until now inspired the region and the rest of the world by taking the democratic path after its 2011 revolution. But the current dysfunction of the political system, the deep poverty in the country's marginalized rural interior and the brutality of extremism are tying a vicious knot that threatens to destroy the transitional process. With the government's proposed "Reconciliation Bill," the promises of the revolution are in danger of being crushed. The gains of the revolution are at stake.

In this worrying situation, what is needed is more support for the rule of law, not less. What Tunisians deserve and what the revolution sought was the end of dictatorship and the pursuit of accountability for large-scale corruption and human rights violations, not authoritarian measures and entrenched impunity.

The government of Tunisia, regrettably, is responding to the current security crisis with measures that could make the situation worse. The now-departed dictator Zine el-Abidine Ben Ali pointed to extremism to justify policies that led to torture, prolonged detention, sexual violence, and forced exile as well as extreme restrictions on the right to education, religious worship and livelihood. That climate of repression could well return with new draconian provisions.

Instead of building on the process of truth, reparations and accountability legislated in the 2013 Transitional Justice Law, which included the creation of the Truth and Dignity Commission (TDC) and Specialized Chambers, the new government has proposed a particularly misdirected plan: granting amnesty to corrupt business people and Ben Ali-era officials in the guise of "reconciliation."

A "reconciliation bill" to amend the Transitional Justice Law has been sent to the Assembly of the Representatives of the People. It gives corrupt ex-Ben Ali regime officials, including those who have also been implicated in political repression, and the businessmen who conspired with them, the chance to offer the state a portion of their self-identified illicit gains. But it does not create a robust mechanism to verify the extent of their corruption or illicit gains. And it has no provision compelling them to testify against those who committed the most serious corrupt acts -- such as Ben Ali and some of his relatives. Nor does it have clear provisions to guard against fraud and collusion that might defeat honest and substantial asset recovery. Nor is there a mechanism for transparency in the process, nor any space for public participation and debate once corrupt officials and business people come forward.

In return, these officials would be given a form of amnesty -- although the bill never uses that term -- and be allowed access to their ill-gotten assets, including those that have been frozen and subject to asset-recovery proceedings in Switzerland, the United Kingdom and elsewhere.

The government has argued that such a law is necessary as both a generous and pragmatic solution to the supposed problem of multiple criminal investigations being pursued against corruption and to encourage investments to help rescue the Tunisian economy. However, a "reconciliation" process that relies almost entirely on the goodwill and honesty of embezzlers and corrupt officials is at the very least naïve.

When considering the bill, Tunisian parliamentarians must first ask themselves: Why did Tunisia have a revolution less than five years ago? From its roots in the 2008 workers' revolt in the Gafsa Mining Basin to the desperate self-immolation of Mohamed Bouazizi two years later, the revolution was an expression of resistance to corruption. The dream of a country untainted by corruption has remained a powerful vision ever since. It is hard to imagine a more demoralizing step for Tunisians than suddenly telling them that they need to make their peace with a kleptocracy.

Second, parliamentarians need to clarify the objectives of the fight against corruption. Is it to provide impunity to the corrupt? Or is it to recover assets that belong to the Tunisian people and create a culture of transparency and accountability?

Tunisia signed the UN Convention against Corruption in 2004. Under Ben Ali, enforcing the convention's principles on asset recovery was impossible. Now with Ben Ali exiled in disgrace, the government must not ignore international standards against impunity. Instead, it should use the treaty's tools to recover stolen assets.

Yet, the bill completely ignores the work of Tunisian investigators and the help extended by other governments through mutual legal assistance proceedings abroad that have led to the freezing of at least $68M in assets in Canada and Switzerland and the return of $28M in assets from Lebanon. More, not less, has to be done, in cooperation with other countries to identify and repatriate assets.

The bill suggests it will take too much time for more assets to be returned. This is not true. Tunisia has already frozen and recovered assets within 2 years of the end of the dictatorship. Compare this with efforts to freeze and recover assets from other ex-dictators in Switzerland alone. It took approximately 30 years for Haiti to begin proceedings to recover at least $6M in Duvalier's assets, 17 years for Nigeria to freeze and take back around $380M from Abacha's ill-gotten assets, and 10 years for the Philippines to recover around $680M in Marcos's assets.

In the cases of the Philippines and Peru, asset recovery, not amnesty, has reinforced justice and accountability. Peru recovered $174M in less than five years from Fujimori's Swiss bank accounts, and part of these recovered assets helped to fund Peru's truth commission and collective reparations programs. In 2013, the Philippines passed a law giving compensation and other forms of reparations to victims of the Marcos dictatorship, funded with $200M of the $680M recovered from the Marcos family so far.

Third, legislators must ask their constituencies what they think. Is it true that being magnanimous with a few rich violators will result in more national unity? Or will it create the kind of resentment that may provoke extreme and perhaps violent acts? What would happen if violent extremists, in and outside of Tunisia, point to high-level impunity as an instrument of propaganda for their horrific acts?

This bill would set up a slippery slope of impunity. After corrupt officials and business people are let off the hook, who will be next? Will it be those who tortured political prisoners or abused their family members? Will it be those who ordered the violent dispersal and killing of protesters from 2008 to 2011? What, then, is the point of establishing a nationwide process for pursuing truth and dignity if the truth about corruption and the dignity of all Tunisians harmed by corruption is ignored?

To be fair, this government has not been the first to flirt with the idea of "reconciliation" with wealthy perpetrators. During negotiations for the Transitional Justice Law, legislators made it clear that they were resigned to the idea that only corrupt business people had the knowledge to move the economy forward. That is why an arbitration mechanism was included in the law, adding to the many functions of the TDC. There have been concerns about how this arbitration process would work. It clearly allows for the prosecution of those who either refuse arbitration or commit fraud. But now, arbitration that has not even been tried is being scuttled in favor of a new instrument that is even more convenient for high-level corrupt officials and business people.

In countries that have tried the trade-off of amnesties for truth, the experience has largely been a failure and a source of public frustration. In Bangladesh, a truth commission on corruption offered a similar amnesty in exchange for an assets-recovery scheme. It suffered from non-verifiability (as Tunisia's "reconciliation bill" likely will) and an inherently flawed design. Not only did the commission not receive significant surrendered assets, it was soon declared unconstitutional on equal-protection grounds. A similar mechanism in Pakistan was also declared unconstitutional by its highest court, which noted that granting immunity to Bhutto's spouses in exchange for their willingness to surrender assets in Switzerland (which were already frozen by Pakistan) set the wrong precedent for would-be corrupt officials.

My organization, the International Center for Transitional Justice, has seen in several countries how the struggle to pursue accountability for large-scale corruption committed under dictatorships and repressive regimes is inseparable from the struggle to pursue justice for massive and systematic human rights violations by those regimes. In most cases, corrupt regimes are brutal because they need force and threats in order to steal and conceal their plunder of public funds as well as public and private land and other assets.

Massive corruption and violent human rights violations are mutually reinforcing, and unless this linkage is exposed and broken, it can lead to mutually reinforcing impunity. This is the lesson Tunisia must learn from the legacy of the brutal and corrupt Marcos dictatorship in the Phillipines, which killed, tortured and forcibly disappeared approximately 10,000 victims, and from the Duvaliers in Haiti, and the Fujimoris in Peru. All were responsible for massive human rights violations. All of them committed large-scale corruption.

Rebuilding societies after kleptocratic rule requires an integral commitment to rule of law, both against corruption and human rights abuses. As Tunisia debates this controversial bill, the world wonders, with anxiety, whether the spirit of transparency and popular demand for accountability set off during the revolution will survive, or whether it will be defeated by the power of ill-gotten money and lead to a downward spiral of repression, more corruption and still unabated extremist violence.

This op-ed was previously published by The Huffington Post.