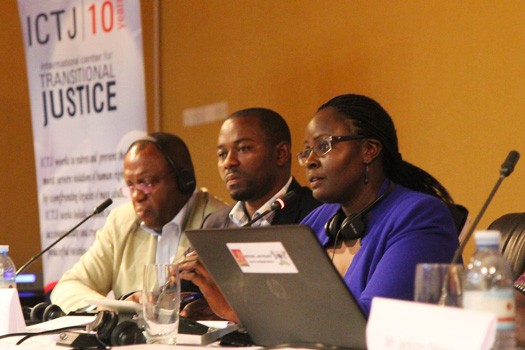 **KAMPALA, May 17, 2016—**Today, the International Center for Transitional Justice (ICTJ) opened a two-day conference in Kampala, Uganda, gathering activists and officials from the African Great Lakes Region to discuss efforts at redress and accountability for serious human rights violations committed in their countries. They will discuss both what has been effective so far and the challenges they face in addressing legacies of atrocity and mass abuses.

“This conference is being organized to help activists in the region, mostly victims and civil society, to share their experiences and learn from each other,” says Marcie Mersky, ICTJ Program Director, who delivered the opening remarks at the conference. “The goal is to contribute to their tireless efforts to advance victims’ rights in countries where the lack of progress of state-led transitional justice mechanisms is the most common pattern.”

In the 2000s, several countries in the region — including Burundi, DRC, Kenya, and Uganda — adopted comprehensive transitional justice plans to address legacies of violence and mass abuses that stretched back decades, and prevent conflicts from recurring.

But in the years that followed, the governments have done little to successfully implement these plans. Few victims have received redress and few perpetrators have been held accountable for crimes.

In Kenya, for instance, the Truth, Justice and Reconciliation Commission fulfilled its mandate and produced a detailed final report of its findings on human rights violations and political violence stretching back to the British colonial period. But President Uhuru Kenyatta has yet to formally receive the report and Parliament has not passed the necessary legislation to implement the commission’s recommendations. In Uganda, the government pledged to implement justice mechanisms under the 2008 Juba peace agreement’s Accountability and Reconciliation protocol; but it has failed to adopt a final policy to implement those pledges, leaving victims without redress.

Given the challenges that official transitional justice processes have faced, some in civil society are focusing their efforts on specific, targeted measures that can advance in the current political climate, like documentation of human rights violations. ICTJ has been working to support these efforts throughout the Great Lakes region, partnering with local Congolese, Kenyan, and Ugandan groups.

“In facilitating these conversations, ICTJ hopes that groups can pursue concrete steps that eventually influence the transitional justice frameworks proposed in their countries,” says Michael Otim, ICTJ’s head of office in Uganda, who is participating in the conference. “By developing a domestic constituency and pursuing more targeted strategies, we believe those working in the region can push for broader accountability for serious crimes.”

Topics of discussion at the conference, which has been organized in partnership with the Austrian Development Cooperation, reflect the multitude of challenges faced in the region and the tactics that local groups have developed to overcome them.

Panels will address the role of civil society in the absence of state-led transitional justice measures, documentation of human rights violations, the pursuit of redress for sexual and gender-based violence, national prosecution of international crimes, and the role of the international community in all these processes.