In Tunisia, efforts to seek criminal accountability have been characterized by an absence of strategy and the lack of political will. An ICTJ conference sought to address these issues and ease the confusion and political gridlock surrounding the Specialized Judicial Chambers. 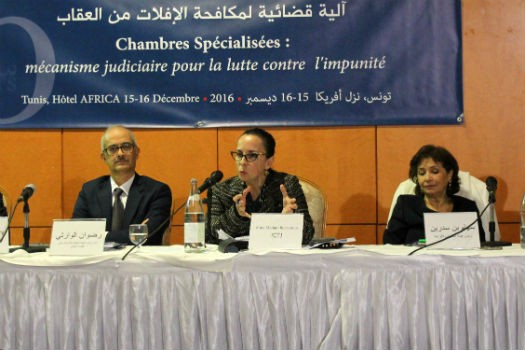 Since Tunisians overthrew Ben Ali’s regime six years ago this month, the country has worked to confront its painful past through the process led by the Truth and Dignity Commission (TDC). <a href="https://www.ictj.org/news/tunisia-justice-dignity-truth"target="blank">Over 62,000 victims have already submitted their complaints to the TDC, and public hearings continue to capture the public’s attention and bring increased awareness to victims’ suffering and their demands for accountability and redress. However, while the TDC continues to shed light on the abuses of the past, there has not been the same progress in prosecution of those crimes. Efforts to seek accountability have been characterized by an absence of strategy and the lack of political will.

Political squabbles have bogged down the criminal justice process. Prosecution of the most heinous abuses of the dictatorship depend on the implementation of the Specialized Judicial Chambers established by Tunisia’s Transitional Justice Law, which are in charge of handling criminal cases of the abuses of the former regime. However, implementation has been slow, as the law does not provide a clear structure for how the Chambers will operate.

This lack of clarity creates a situation ripe for political gridlock, with every step forward being met with new obstacles: for instance, 45 judges have been nominated to the Chambers, but their nomination did not follow any clear procedure and they have not received the training necessary to handle these sensitive cases. Many of these judges have not previously handled criminal cases.

To help bring clarity to the situation and provide a roadmap to criminal accountability moving forward, ICTJ convened a conference with the partnership of the Tunisian Bar Association on December 15th and 16th in Tunis. The conference gathered over 100 officials connected to transitional justice efforts in Tunisia, among them Specialized Chamber nominees, members of the TDC, and representatives from lawyers’ and victims’ associations. In a series of panel discussions, they addressed the major issues that must be settled in order for the Specialized Chambers to become operational in full respect of the fair trial guarantees.

Radhouen Ouerthi, the vice president of the Provisional Authority for the Supervision of Judicial Justice, and Sihem Bensedrine, chairwoman of the TDC, were among the national leaders in attendance. Ouerthi noted the urgent need to overcome the obstacles facing the Chambers. “It is high time to point out different legal and material obstacles that hamper the activation of Specialized Chambers and move forward toward accountability,” he said. Bensedrine added that “Tunisia’s Transitional Justice Law provides several mechanisms to fight impunity and to restore victims’ rights, including the creation of Specialized Chambers. We must make full use of these mechanisms, in concert with one another, if we are to achieve justice for abuses.”

Read a detailed analysis of the Special Judicial Chambers based on the conference.

According to participants in the conference, the practical and legal obstacles that hamper the effective implementation of Specialized Chambers include the lack of clarity about how the TDC and the Specialized Chambers will work together, and whether the TDC will be the sole authority to conduct criminal investigations for the Chambers. They also pointed out the need to clarify what sections of the criminal code will apply to the Chambers.

Another important issue the conference addressed was the question of appeals: would those convicted by the Specialized Chambers be able to appeal the decision? And if so, who would hear the case? Participants pointed out that the exclusion of an appeal mechanism would breach the Constitution. They also expressed their concern with the prosecution of conduct that was not explicitly criminalized at the time.

ICTJ’s Howard Varney also provided an overview of comparative experiences of special chambers from around the world and raised several due process concerns. He suggested that lawyers and judges should seek to resolve tensions between the desire to secure quick justice and the need to respect due process, as required by binding international treaties.

“One of the Special Court judges poignantly stated that he wished to preside over fair hearings that respected due process,” Varney said. “However, he feared that the process may not be fair given that various legal measures did away with certain protections the courts normally respected. He identified this as the central dilemma facing judges and practitioners.”

The conference ended with recommendations from participants. Firstly, attendees agreed that the Special Chambers cannot get off the ground until the all parties have clarity around the laws that will govern the new body. Legislative gaps must be addressed and the Chambers must be able to guarantee fair trials. Secondly, participants urged authorities to accelerate the domestication of international conventions ratified by Tunisia, to provide a solid base for prosecution. Finally, the criteria for transferring cases from the TDC to the Chambers must be clarified and communicated to the public.

This conference was an important step to achieving these critical goals. In the weeks to come, ICTJ will circulate a report among judicial leaders in Tunisian in order to formulate next steps to get the Specialized Chambers off the ground. “The conference highlighted the several legislative and structural gaps which need to be addressed in order to operationalize the Special Chambers,” said Anna Myriam Roccatello, ICTJ’s Deputy Programs Director. "It also demonstrated how the expectations of victims and the society at large require to be managed within the parameters of criminal justice principles."