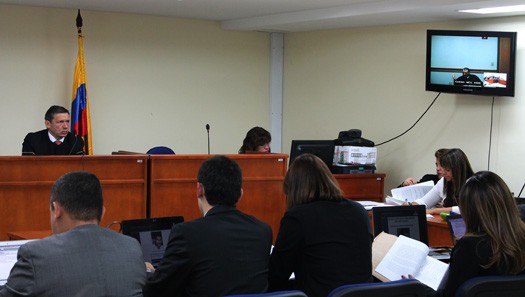 The reading of the first verdict in the Justice and Peace process case against paramilitary commander Hebert Veloza Garcia, alias “H.H.”, will take place on October 30.

The charges against Veloza include 85 criminal acts committed in the Uraba region, and establishes his responsibility for 105 homicides, in addition to cases of torture, kidnapping, forced disappearance, theft, and forced recruitment of minors, among others.

The verdict—issued by the Justice and Peace Courtroom of the High Tribunal of Bogotá—will be a landmark in the state’s compliance with its obligation to investigate, prosecute, and sanction those who have committed international crimes and serious human rights violations in the country.

On Wednesday, ICTJ will live-stream the reading of the verdict on our Spanish website from 9 a.m. to 2 p.m., EDT.

Background on the "H.H." Case

Colombia continues to endure the longest and most complex internal armed conflict in the Western hemisphere. The conflict involves a myriad of actors and interests, and is a product of political ambitions, social tensions, and legal and illegal competition for resources.

The Justice and Peace process against Veloza Garcia –commander of the Bananero bloc in the northwestern region of the country, and of the Calima bloc in the southwestern part of Colombia– is particularly significant for several reasons: the fact that Veloza was a high ranking commander in the paramilitary structure in the Uraba region; the elevated number of crimes he committed or ordered; his extensive collaboration in the judicial process; and the information that he provided on the links between the paramilitary group and businessmen, politicians, and the armed forces in this region.

Perhaps most important is that this verdict is expected to provide a broader overview of the paramilitary structures and expose the complexity of the criminal apparatus: its composition, structure, plans, as well as policies, practices, and the contexts that enabled or facilitated the systematic or widespread perpetration of these abuses.

Maria Camila Moreno, director of ICTJ’s office in Colombia, says that this verdict is a milestone for transitional justice in Colombia. “One of the main challenges faced by the Colombian justice system, and in particular the Justice and Peace process, is to establish the true nature of the paramilitary phenomenon, its criminal, military, economic, and sociopolitical dimensions, as well as its extensive networks and links to legal actors,” she said.

“This is why our expectations for this verdict are very high. The mission of the Justice and Peace process is to expose the network of actors and the responsibility of those who financed, sponsored, and supported its activities, in addition to those who guaranteed the impunity of the criminal acts committed and benefited from them.”

The verdict against Veloza Garcia is particularly relevant for the trade union movement and the Union Patriotica (UP) political party: In the late 1980’s and 1990’s, members of the left-wing party were persecuted and targeted as they gained seats in local governments, and 5,000 of its members were killed.

The “H.H.” verdict could corroborate the two statements made by magistrate Eduardo Castellanos in his prior ruling on this same process: that the persecution of members or supporters of the UP was a politically-motivated genocide, and that the “crimes committed against members of the trade unions in the Uraba region should be considered crimes against humanity.” This is the first time that a judicial authority uses the concept of political genocide to refer to the persecution of the UP.

The judicial proceedings against Hebert Veloza were conducted in Colombia between October 2007 and March 2009, when he was extradited to the United States on drug trafficking charges and imprisoned in the Metropolitan Correctional Center of New York. Veloza Garcia has been participating in the hearings from prison via video conference.