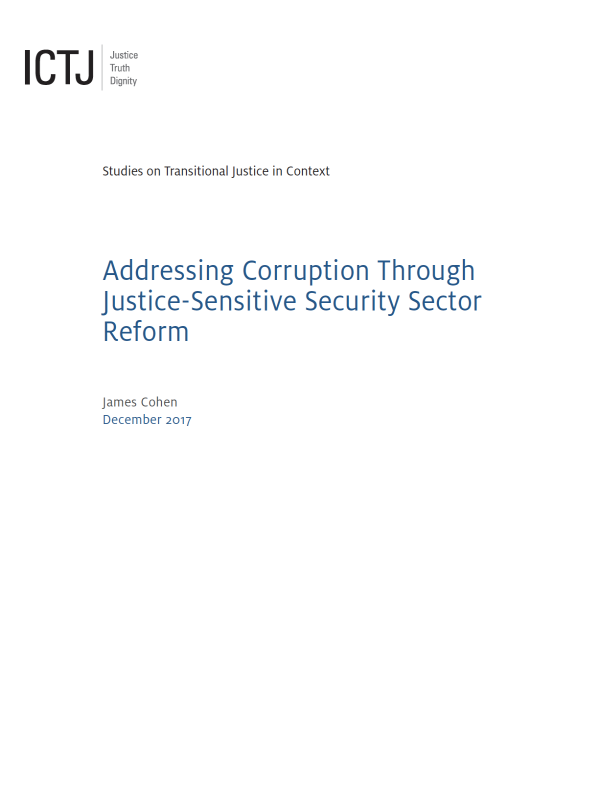 Nevertheless, corruption is a tool used to perpetuate authoritarian regimes, inter-group grievances, and recur-rent conflict. Public demonstrations and the overthrow of governments in the past 17 years have brought the implications of corruption to the forefront of global attention. Corruption was one of the key rallying points in 2011 leading to mass demonstrations in the Middle East and North Africa (MENA) and the overthrow of governments across the region. For example, despite surface-level positive indicators, such as literacy and a size-able middle class, Tunisia was controlled by close family members of former president Zine El Abidine Ben Ali, a political arrangement that excluded many Tunisians from the country’s economic gains. Further, economic opportunity was stifled in the country, a point made most dramatically when Mohamed Bouazizi, a fruit vendor frustrated at not being able to run his business without police harassment, set himself on fire in front of the governor’s office, sparking wider protests in Tunisia and beyond that became known as the “Arab Spring.” Today, part of Tunisia’s Truth and Dignity Commission’s (TDC) mandate is to examine cases of corruption, economic crimes, and marginalization. Likewise, corruption has factored into the “colour revolutions” of the 2000s, government ousters through investigations, and mass street protests of recent years in locations such as Brazil, Guatemala, Iceland, and Iraq. Notably, Mikhail Sakishvelli led Georgia’s “Rose Revolution” in 2003 to address gross institutionalized corruption, prioritizing major institutional reforms and asset recovery once he took office as president. Also in 2003, a majority of Kenyans consulted specifically told the Taskforce on Establishment of a Truth, Justice and Reconciliation Commission that corruption was a key concern. In Guatemala, connections between paramilitary groups and state security services led to the creation of the innovative International Commission Against Impunity in Guatemala in 2006 (known in Spanish as CICIG). By 2015, CICIG investigations in customs embezzlements led to country-wide street protests, forcing the resignation of President Otto Pérez Molina and his ultimate arrest and conviction.

While the head of state is usually the target of public accusations of state mismanagement in transitional settings, the security sector is often accused of carrying out physical and political abuses on behalf of the previous regime. Security actors can play a crucial role in a corrupt system that robs the state of resources and prevents economic growth that would provide sustainable livelihoods for its population. Security actors, operating independently or with explicit direction from state officials, can commit human rights violations, like attacking individuals and communities who hold access to resources or levers of the economy, to fund their own interests. They can seize land and private property, force competitors out of the market, and dole out severe consequences to those who advocate for transparency of security sector management or access to markets.

Dustin Sharp describes this process as “economic violence,” citing the Liberian civil war, in which “Charles Taylor and other rebel faction leaders encouraged their troops to ‘pay themselves’” through rampant looting. In another example of systematic profiteering from instability, as detailed in the Liberian Truth and Reconciliation Commission’s final report, Sharp highlights: "instances of Charles Taylor’s soldiers helping to guard the very logging companies who were paying Taylor for the privilege of operating in his territory, which in turn allowed Taylor to buy arms and take more territory, extorting even more companies and further diverting the proceeds of plunder and pillage into his war machine."

Egypt provides another example of the connections between corruption, human rights violations, and the security sector. The country has appeared to come full circle since the 2011 overthrow of President Hosni Mubarak, who had previously been backed by the military. His ouster was followed by the election of Muslim Brother-hood leader Mohamed Morsi as Egypt’s first democratically elected president, and then his subsequent removal by the military. Some speculate economic concerns had a role to play in Morsi’s removal. Estimates of the military’s control of the Egyptian economy vary between 5 and 40 percent, with military interests stretching into consumer goods, construction, and agriculture, among other areas. By presidential decree, the military controls an estimated 87 percent of Egypt’s land, which the state deems to be unused. Most of these numbers are estimates, because there is no scrutiny of the military’s budget, with all activity labelled as a “national security” issue and the Egyptian public considering the topic too taboo for discussion. Given the military’s entrenched interests, the theory that Morsi was overthrown due to his attempt to develop the Suez Canal without military involvement—cutting officers out of a large source of revenue —holds some merit. This led to the military’s re-establishment in power, without any changes to Egyptian society in areas such as economic opportunity, for which protestors rallied in the street and many gave up their lives.

Corruption often plays an influential role in state violence and can act as a weapon in itself. Yet, addressing it by uncovering its past role in order to help build credible security institutions for the future is still rare. This paper contends that transitional justice and SSR can be mutually reinforcing and effective in addressing security sector corruption.