ICTJ was pleased to host the newly elected United Nations Special Rapporteur on the promotion of truth, justice, reparations, and guarantees of non-recurrence, Fabian Salvioli (Argentina), at its New York office, where he discussed his vision and priorities. 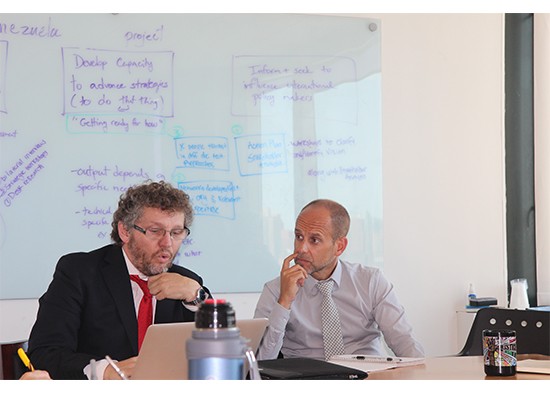 New York, NY—ICTJ was pleased to host the newly elected United Nations Special Rapporteur on the promotion of truth, justice, reparations, and guarantees of non-recurrence, Fabian Salvioli (Argentina), at its New York office. Joining ICTJ staff for an informal presentation, he discussed his vision and priorities. Salvioli’s visit followed on the heels of the UNDP Annual Meeting on the Rule of Law and Human Rights, where he joined a panel on transitional justice moderated by ICTJ’s Virginie Ladisch.

Salvioli detailed his mandate, the current challenges facing the field, and the issues he intends to tackle during his three-year term. Salvioli, who took up his functions as the Special Rapporteur in early May, is the second person to hold the position, succeeding Pablo de Greiff who served two three-year terms.

“Pablo de Greiff left us a tremendous legacy of knowledge, reflections, and compassionate human rights advocacy,” said Fernando Travesí, Executive Director of ICTJ. “His are big shoes to fill, and it is clear that Fabian is ready to step boldly into his mandate,” said Travesí.

“Salvioli has vast experience listening to the stories of victims and putting their needs in the forefront,” said Travesí. “We look forward to working with him to support his agenda and advance informed policy solutions.”

Salvioli spoke on a number of themes, including gender, prevention and non-recurrence, and the shifts in public understanding of transitional justice measures and their application in contexts of ongoing conflict or repression.

“I’m coming from a human rights perspective,” said Salvioli, who served on the distinguished UN Human Rights Committee between 2009 and 2016 and as its President between 2015 and 2016. “So, for me, transitional justice…is a holistic approach to finding just solutions for regimes that have committed violations of human rights.”

“The ‘four pillars’ are an interesting approach and I don’t want to destroy them. But, I want to update them,” he said. “They are a tool, but there is no obligation to always follow this structure.”

It is critical to maintain flexibility in order to respond to a wide range of political conditions and country contexts, Salvioli explained. “For me, it is important to think about the objectives,” he said. “Otherwise, there is a risk we will focus on the form and not on the merit.”

Salvioli, however, made it clear that his highest priority while Special Rapporteur would be the victims. “I want to…bring justice to the victims of mass atrocities,” he said. “I was committed when I started my career in human rights and I will remain committed all my life. I will be open to dialogue with all stakeholders, but my priority will be to listen victims’ voices.”

While successful prosecutions can offer meaningful redress for victims, real transformation can happen only when the structural causes of the human rights violations are addressed, he said.

“I was in Guatemala with the women survivors of the Sepur Zarco massacre…[and they] said to me: ‘Listen, I am dying. I am 92, 93 years old. My life is ending, and I don’t want my grandson to be treated like a slave. The situation for my grandson is the same as it was for me when I was that age. It was this situation that led my husband and my son to fight.’

“As Special Rapporteur, I want to change the situation,” he said. “That is reparations, for me.”