'You Can Change the Course of a Country:' Report on the International Gender Symposium 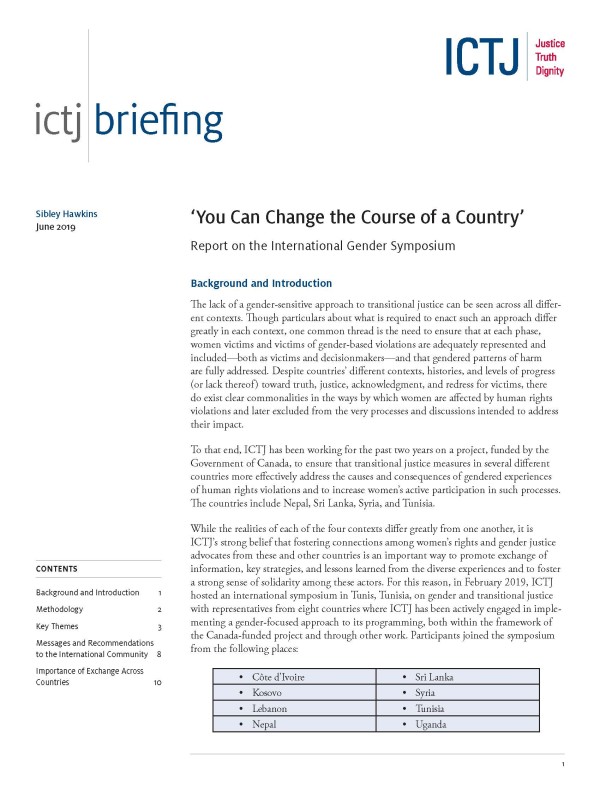 The lack of a gender-sensitive approach to transitional justice can be seen across all different contexts. Though particulars about what is required to enact such an approach differ greatly in each context, one common thread is the need to ensure that at each phase, women victims and victims of gender-based violations are adequately represented and included—both as victims and decisionmakers—and that gendered patterns of harm are fully addressed. Despite countries’ different contexts, histories, and levels of progress (or lack thereof ) toward truth, justice, acknowledgment, and redress for victims, there do exist clear commonalities in the ways by which women are affected by human rights violations and later excluded from the very processes and discussions intended to address their impact.

To that end, ICTJ has been working for the past two years on a project, funded by the Government of Canada, to ensure that transitional justice measures in several different countries more effectively address the causes and consequences of gendered experiences of human rights violations and to increase women’s active participation in such processes. The countries include Nepal, Sri Lanka, Syria, and Tunisia.

While the realities of each of the four contexts differ greatly from one another, it is ICTJ’s strong belief that fostering connections among women’s rights and gender justice advocates from these and other countries is an important way to promote exchange of information, key strategies, and lessons learned from the diverse experiences and to foster a strong sense of solidarity among these actors. For this reason, in February 2019, ICTJ hosted an international symposium in Tunis, Tunisia, on gender and transitional justice with representatives from eight countries where ICTJ has been actively engaged in implementing a gender-focused approach to its programming, both within the framework of the Canada-funded project and through other work. Participants joined the symposium from the following places: Côte d’Ivoire, Sri Lanka, Kosovo, Syria, Lebanon, Tunisia, Nepal, and Uganda.

The majority of the participants represented civil society organizations or victims’ groups, though a few joined to discuss their work within state-led transitional justice mechanisms. Even among the latter group, most had previously worked on justice issues as activists and members of civil society.

All of the participants happened to be women. While ICTJ recognizes the value of bringing men and gender non-conforming individuals into discussions on gender and activism, ICTJ’s main partners on gender issues from the participating countries are currently predominantly women. Whether as a result of the all-woman makeup of the symposium or unrelated completely, a bond was quickly established among participants. Despite coming from very diverse contexts, the commonalities shared among these women activists developed into a strong sense of solidarity, which allowed for particularly frank, open, and personal discussions.

The objectives of the symposium included the following: