Decisions to Prosecute Without Fear, Favor, or Prejudice: Experts Grapple with Challenges in Pursuing Justice for International Crimes

In countries emerging from violent conflict and repression around the world, prosecutors are facing significant challenges and pressures when seeking to investigate and prosecute serious crimes, such as torture, extrajudicial killings, and enforced disappearance. To reflect on these challenges, ICTJ together with the International Nuremberg Principles Academy, and with support from the governments of Australia and Sweden, convened a side event on December 6, 2019, during the 18th Assembly of State Parties of the International Criminal Court. 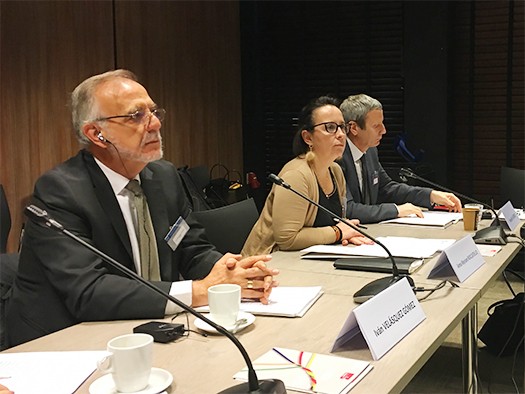 In countries emerging from violent conflict and repression around the world, prosecutors are facing significant challenges and pressures when seeking to investigate and prosecute serious crimes, such as torture, extrajudicial killings, and enforced disappearance. To reflect on these challenges and consider how to enhance effective national prosecutions, a core principle of complementarity, ICTJ together with the International Nuremberg Principles Academy, and with support from the governments of Australia and Sweden, convened a side event on December 6, 2019, during the 18th Assembly of State Parties of the International Criminal Court. The event featured a panel discussion that included Iván Velasquez Gómez, Colombian jurist and former Commissioner of the International Commission Against Impunity in Colombia; Mr. Howard Varney, Senior Program Advisor at ICTJ; and Dr. Viviane Dittrich, Deputy Director of the International Nuremberg Principles Academy.

With over 65 participants in attendance, representing governments, civil society, and international and regional organizations, this forum provided an important opportunity to examine the role that national prosecutors play as the gatekeepers to criminal accountability for international crimes and to discuss approaches for enhancing cooperation between national and international prosecutors and civil society actors. The topic was an important and timely one, and took as one of its starting points ICTJ’s recent report, Guiding and Protecting Prosecutors: Comparative Overview of Policies Guiding Decisions to Prosecute.

In many jurisdictions across Europe, groups of dedicated prosecutors are taking the lead in investigating and prosecuting serious international crimes under the principle of universal jurisdiction, many working within specialized departments dedicated to bringing forward complex war crime cases. As H.E. Annika Markovic, Ambassador of Sweden to the Netherlands and a speaker at the side event, reported, Swedish courts have convicted 10 individuals for serious international crimes committed in Rwanda, the former Yugoslavia, and Syria since 2006. According to her, “currently, the Swedish police is collecting evidence and testimonials from the Yazidi community in Sweden in order to investigate the serious international crimes committed in Syria and Iraq.”

Yet the picture for prosecutors is much bleaker in most other places around the world. Weak criminal justice systems, a lack of political will, and undue influence and flagrant interference often get in the way of efforts to investigate crimes and prosecute those responsible, leaving victims without any measure of justice. Anna Myriam Roccatello, ICTJ’s Director of Programs and the moderator of the panel, framed the issues at stake, “the independence of the prosecution as a critical function of rule of law” is a “particular challenge in countries that have witnessed mass violations of human rights and atrocities” and are “still in the process of transitioning and reestablishing themselves.”

In many of these contexts, justice is either delayed or more commonly denied outright. In South Africa, for instance, senior members of the government secretly intervened to suppress the investigation and prosecution of nearly 400 cases dealing with assassinations, murders, and massacres, which were handed over to the national prosecuting authority by that country’s truth and reconciliation commission. Only recently, and after years of dedicated work by victims and human rights activists, has some progress been made in getting some of those cases before the courts, in many instances over 30 to 40 years after the crimes were committed. Similarly, in Guatemala, it took more than 30 years to finally bring the former military dictator José Efraín Ríos Montt to trial for genocide and crimes against humanity.

As the panelists similarly stated, these challenges to justice are only exacerbated by the backlash against the International Criminal Court (ICC), the rule of law, and democratic norms more broadly in many places. Fundamental principles undergirding the rule of law and human rights, long taken for granted, are now being challenged. As Iván Velasquez Gómez pointed out, “to the extent that the population considers that the government is distant and alien, it observes the privileges in the economy and feels that justice is not for everyone because it allows the powerful to live above the law, the dissatisfaction with democracy is greater.”

Despite setbacks for democracy and the weakening of institutions established to prosecute and administer justice, participants shared much common ground on how to address political interference and make progress in the fight against impunity worldwide. According to Howard Varney, the author of the Guiding and Protecting Prosecutors report, “some of these means are obvious: guaranteeing the independence of prosecutors, protecting their work, enshrining their independence through constitutions and statutes and policies.” Adopting prosecutorial policies or guidelines, as the report recommends, can also go a long way in helping by providing benchmarks for decision making, as well as a shield for prosecutors in the face of undue influence, pressure, or interference. However, even the best protection under law is not enough without a strong commitment to justice, Mr. Varney emphasized. “Prosecutors require courage and commitment to justice,” he said. “That is particularly the case, given that in many post-conflict societies, the culture of corruption has taken root because of poor leadership.” In those circumstances, other structural reforms are often necessary.

The vital role that the resilience of victims and civil society plays cannot be overstated. It is often their determination and cooperation with prosecutorial efforts that ensure prosecutions can proceed, sometimes decades later. Equally important in the fight against impunity is the effective cooperation between national and international justice mechanisms, including the ICC, the topic of a 2016 Nuremberg Academy publication. As Dr. Viviane Dittrich stressed, such “cooperation should take place from earliest stages to ensure effectiveness and realize its full potential” and should respect general principles of cooperation such as “do no harm.”

Despite a palpable sense of urgency to fight for justice and for the rights of the many victims who continue to suffer in their long wait for truth and accountability, the event ended on a note of optimism. Participants left with the resolve to press on, to continue to critically engage with prosecutorial efforts worldwide, and to support victims and civil society.

PHOTO: Iván Velasquez Gómez, Colombian jurist and former Commissioner of the International Commission Against Impunity in Colombia, Anna Myriam Roccatello, ICTJ’s Director of Programs, and Mr. Howard Varney, Senior Program Advisor at ICTJ, participate in a panel discussion at the side event on December 6, 2019. (ICTJ)