New York—On February 26, ICTJ and NYU Law’s Center for Human Rights and Global Justice will welcome former President of Colombia and Nobel Peace Prize Laureate Juan Manuel Santos for a conversation on the role of transitional justice in peace negotiations. 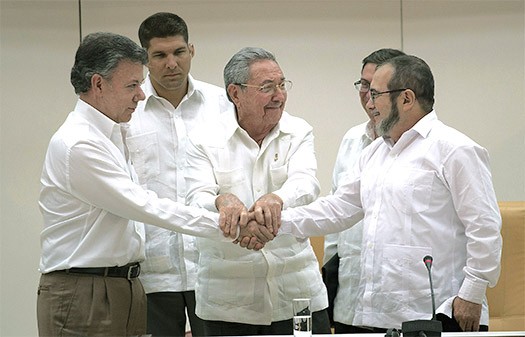 New York, February 20, 2020—On February 26, the International Center for Transitional Justice and NYU Law’s Center for Human Rights and Global Justice will welcome former President of Colombia and Nobel Peace Prize Laureate Juan Manuel Santos for a conversation on the role of transitional justice in peace negotiations.

As the keynote speaker of the 11th Annual Emilio Mignone Lecture, President Santos will reflect on the singular opportunity that peace negotiations can offer a society torn apart by conflict and grappling with mass atrocities for accountability, acknowledgment and redress for victims, and reforms. For those at the negotiating table, acknowledge and accountability are often the most difficult and sensitive matters to address. But as the peace deal in Colombia has shown, they are essential for a society to successfully make the transition to a sustainable peace. At a time when brutal conflict rages around in the world, President Santos’s experiences leading peace negotiations could offer crucial lessons on best paths forward in places like Syria, Yemen, and Libya.

President Santos served as Colombia’s head of state for two terms from 2010 to 2018, during which time he led peace negotiations with the guerrilla group the Revolutionary Armed Forces of Colombia (FARC) and signed the landmark peace agreement in 2016 that ended the 50-yearlong civil war. That same year, he received the Nobel Peace Prize for his resolute efforts to bring peace to his country.

Currently, President Santos teaches at Oxford University and chairs the board of COMPAZ Foundation, which he created to promote peace, protect the environment, and fight poverty. He also serves on the boards of the International Crisis Group, the Wildlife Conservation Society, the Global Commission on Drug Policy, and recently joined The Elders. His latest book, The Battle for Peace, tells the story of the long, hard road traveled to end the conflict with FARC.

The event will be held at the at the Ford Foundation Center for Social Justice in New York, NY, on Wednesday, February 26, 2020, at 6:30-8:30 p.m. It will be livestreamed on ICTJ’s Facebook page: facebook.com/theICTJ. For press inquiries and tickets, please contact ICTJ directly.

This annual lecture was named after human rights advocate Emilio Fermín Mignone, founder and director of the Centro de Estudios Legales y Sociales, and loving father of Monica Maria Candelaria Mignone, whom the Argentine military forcibly disappeared on May 14, 1976. It honors Mignone’s lifelong commitment to human rights, accountability, and justice and his vital leadership in documenting disappearances and other grave human rights violations committed by Argentina’s security forces.