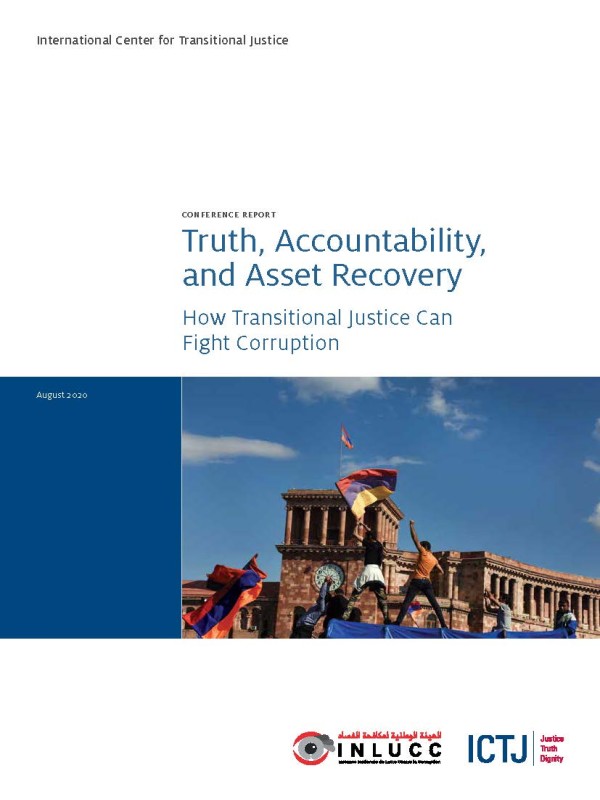 Download the report's annex with statements by panelists here.

On March 2 and 3, 2020, two weeks before the World Health Organization (WHO) declared a COVID-19 global pandemic, transitional justice and anti-corruption policymakers, experts, and activists from the Gambia, Kenya, South Africa and Armenia met with their counterparts in Tunisia for a two-day conference entitled, “Truth, Accountability and Asset Recovery: How Transitional Justice Can Fight Corruption,” organized by ICTJ with the support of Tunisia’s National Anti-Corruption Commission (INLUCC) and the Government of the Federal Republic of Germany. This diverse group of leaders came together to share solutions to a common problem: How can countries emerging from dictatorship, war, or political transitions hold corrupt ex-rulers accountable, recover their ill-gotten assets, and ensure that those harmed the most by human rights violations and large-scale corruption can achieve justice, obtain reparations, and overcome marginalization?

For many countries pursuing transitional justice, including those represented by participants in the conference, the health and economic impact of the pandemic has made it more urgent to find and design solutions that advance accountability for both human rights violations and corruption. In Kenya, for example, citizens questioned the government’s use of $12 million in COVID-19-related aid from the World Bank, “amid reports that the lockdown intended to curb the spread of the virus had worsened poverty, even forcing a mother to cook stones to make her eight children believe she was preparing food for them.”  In Tunisia, INLUCC “identified 11 instances of suspected corruption and conflicts of interest” related to a government deal to acquire millions of facemasks.  At the conference, participants brought up the role of the World Bank and the International Monetary Fund (IMF) in enabling corruption during dictatorship or in facilitating state capture through privatization. Ninety-seven human rights and anti-corruption groups have jointly reminded the IMF, which has offered loans to pandemic-hit countries even as it continues to set austerity as a condition, that “transparency and accountability are key to making sure the money the IMF is disbursing actually goes to protecting lives and livelihoods.”

This report gives an overview of the conference and its five panel discussions.  It presents the thematic questions posed in each panel and summarizes the panelists’ statements and the comments and questions from moderators, other panelists, and participants in the audience. By design, the premise of the conference was clear: The practice by mainly global South countries of including accountability for corruption in their transitional justice processes has settled the debate over whether accountability for corruption should be part of transitional justice.

In 2008, the Kenya Truth, Justice and Reconciliation Commission began investigating land-grabbing, large-scale corruption, and violations of economic and social rights. Soon after the Arab Spring in 2011-2012, Tunisia took the most significant steps when it established the Truth and Dignity Commission (TDC) with a mandate that covered violent political repression as well as corruption under former President Ben Ali. In its recently released final report, the commission examines the extent of the corruption and how the development policies and austerity measures imposed by international financial institutions such as the World Bank and the IMF enabled it.  In 2016, the post-dictatorship government in the Gambia created a truth commission to examine human rights violations as well as a separate commission of inquiry to investigate ex-dictator Yahya Jammeh’s corruption and identify his ill-gotten wealth. The latter commission is now considering using part of those assets to fund reparations. Although corruption was excluded from the mandate of South Africa’s Truth and Reconciliation Commission, activists in 2017 created the People’s Tribunal on Economic Crime that linked the continuity of post-apartheid corruption to the failure to address it in earlier transitional justice processes. In 2018, the South African government then created the Judicial Commission of Inquiry into Allegations of State Capture to investigate specific economic crimes during and after apartheid. After the 2018 revolution in Armenia that ended a decade of authoritarian rule in the post-Soviet state, the new government embarked on prosecutions for corruption and human rights violations and is now considering a truth commission that would examine specific cases of corruption and human rights violations since 1991.

These processes informed the conference, and the panelists who were directly involved in them discussed the challenges, successes, and lessons learned. This report’s original intent was to highlight the most important lessons from these experiences and promote South-South exchanges on transitional justice and accountability for corruption. However, the unprecedented global pandemic during which the conference took place has given it another equally relevant purpose. As ICTJ pointed out in a recent special report on COVID-19, “The pandemic is bringing to the surface underlying inequalities, including the unequal access to health care.”  With this in mind, the author hopes this report will also offer policymakers practical approaches to transitional justice that can help address those underlying inequalities, such as measures aimed at improving access to health care for the most vulnerable, and initiatives to use recovered ill-gotten assets to fund reparations for victims.