Six years of unrelenting war in Yemen has created what the United Nations has called the world’s biggest humanitarian crisis. Rubbing salt in the wound, members of the UN Human Rights Council rejected a resolution to renew the mandate of the Group of Eminent International and Regional Experts on Yemen, a body investigating serious human rights violations. The council’s decision is a serious blow to accountability in the country. 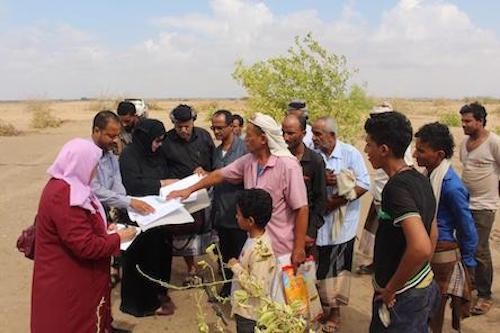 Six years of unrelenting war in Yemen has created what the United Nations has called the world’s biggest humanitarian crisis. Much of the vulnerable country’s critical infrastructure has been destroyed, and the majority of its 30 million people now live in extreme poverty and are at risk of hunger and disease. A series of failed international ceasefire proposals have all but shattered hope for a peace deal.

“Millions of Yemenis live on aid after the extreme depreciation of Yemen’s national currency, the seizure of state institutions and their revenues, and the absence of an economic strategy to reduce outrageous prices,” warns Eshraq Almaqtari, spokesperson of the Yemeni National Commission to Investigate Alleged Violations to Human Rights (NCIAVHR). “Thousands of women, in detention centers or in camps, are waiting for the goods to arrive from some international organizations that have enriched their staff at the expense of the Yemeni people.”

Rubbing salt in the wound, members of the UN Human Rights Council rejected a resolution to renew the mandate of the Group of Eminent International and Regional Experts on Yemen (GEE), an international body investigating serious violations and abuses of international human rights law and international humanitarian law. The council’s decision is a serious blow to accountability in the country. Local and international civil society organizations have stressed the need to implement the GEE’s recommendations as well as those of the UN Security Council Sanctions Committee’s Panel of Experts on Yemen to establish mechanisms to combat impunity and advance accountability in the country. Efforts could include referring the situation in Yemen to the International Criminal Court; establishing an international, impartial, and independent mechanism for Yemen; expanding the list of persons subject to the UN Security Council’s sanctions; creating a special hybrid tribunal to prosecute individuals most responsible; and bringing cases to court in third countries under universal jurisdiction.

Today, the only local accountability mechanism existing in Yemen is the NCIAVHR. Established in 2016, it monitors, documents, and investigates violations of human rights and international humanitarian law committed since 2011 by all parties to the conflict. The NCIAVHR aims to establish the facts surrounding the crimes and identify those responsible, in accordance with applicable national and international laws, with a view to holding the perpetrators to account and ensuring victims receive compensation.

“The commission has been able to investigate thousands of incidents and refer a number of cases to the judiciary, while preparing the files for use in future transitional justice mechanisms and peace initiatives seeking to protect human rights and deliver justice for victims,” explains NCIAVHR spokesperson Eshraq Almaqtari. Unfortunately, Yemen’s judiciary has failed to render a final verdict in any of these referred cases. For this and other reasons, substantive institutional reforms that ensure a more independent judiciary may be necessary, despite the myriad challenges they would face, if Yemen is to ever deliver justice for human rights abuses.

ICTJ supports the NCIAVHR’s efforts by training its members on transitional justice issues and offering them comparative experiences and lessons learned from countries around the globe.  “The absence of international accountability mechanisms for Yemen and the weak national institutions leaves victims with no reliable path to justice,” stresses ICTJ Program Expert Nour El Bejjani Noureddine. “Various elements of accountability and justice for the people of Yemen should be at the heart of any peace process, which is key to building sustainable peace and preventing the recurrence of violence.”