Paths to Transitional Justice in Armenia

In designing transitional justice in Armenia, policymakers, civil society activists, and international actors should remember those who have not had justice for so long: the families of those killed or injured in March 2008, the victims of torture and political detention, the mothers in black seeking the truth about why their soldier sons were killed, the old pensioners who live in cold and hunger, farmers and rural communities who need access to social services, and students and young citizens who saw that their hope for a better future required a revolution. 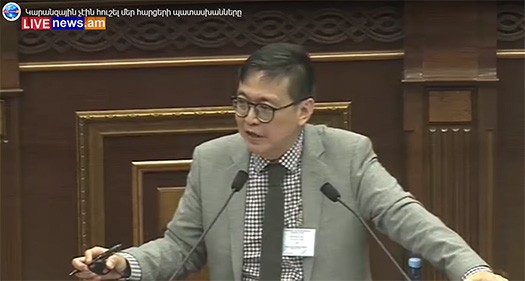 The following text is exerpted from ICTJ's Ruben Carranza's address to the National Assembly of Armenia in Yerevan on May 24, 2019.

Like the Arab Spring, the Armenian revolution was not an event that only occurred in April 2018. The context could be compared to the beginning of the Arab Spring revolutions in 2011. That revolution is often said to have started in Tunisia in 2011. The reality is that the Arab Spring began earlier, some say in 2008, when working class families in the mining regions of Tunisia launched a strike to protest against corruption in the hiring of workers in the state-owned mining companies. The strike was violently suppressed, leading to several deaths and injuries. But it marked the beginning of a revolution.

In Armenia, successive protests involving both corruption and economic grievances led to repression, on one hand, and a more emboldened civil society, on the other. The deaths of 10 people during the 2008 protests against election fraud and the successful “Electric Yerevan” protests in 2015 that stopped a 17 percent increase in the price of electricity, as well as other justice-seeking efforts, ultimately led to the 2018 revolution.

The grievances of the Armenian movement are inextricably related to each other. Grievances against corruption led to protests. When these protesters were violently attacked by the previous governments, it led to grievances over human rights violations, including violations not only of civil and political rights, such as the freedom of assembly or speech, but violations of economic and social rights, including the right to a dignified standard of living, to housing, and to a livelihood.

In the transitional justice debates so far in Armenia, much of the focus has understandably been about alleged perpetrators of large-scale corruption and human rights violations, some of whom have been charged in court. Prime Minister Nikol Pashinyan’s call for demonstrations to protest corruption in the judiciary generated significant public support, and concerns were raised about how this might violate the rights of alleged perpetrators. It is certainly not wrong to be concerned about due process and the right of alleged perpetrators to fair trials. It is also absolutely correct to try and maintain the independence of courts in all cases, including in cases involving those who are alleged to have the most responsibility for corruption and human rights violations.

In designing transitional justice in Armenia, policymakers, civil society activists, and international actors should therefore remember those who have not had justice for so long: the families of those killed or injured in March 2008, the victims of torture and political detention, the mothers in black seeking the truth about why their soldier sons were killed away from combat, the old pensioners who live in cold and hunger while oligarchs and their politician friends enrich themselves, farmers and rural communities who need access to social services, and students and young citizens who saw that their hope for a better future required a revolution.

If Armenia’s existing state institutions cannot be relied on to pursue accountability and justice for these grievances, what can transitional justice offer?

Whether perception or reality, Armenia’s judicial and prosecutorial agencies still include a significant number of judges and investigators who looked away while their institutions were abused or were complicit in or allowed this abuse. The abuses of the past two decades are systematic. Armenia must look to reforms that are far-reaching and that overhaul entire institutions and not just remove, prosecute, or punish certain individuals. For example, approaching election fraud as a criminal prosecution issue would do little to radically change the election process.

The question is not whether there should be vetting in the judiciary, but how and when vetting should take place. There are many examples of vetting and judicial reforms that have been part of transitional justice processes in other countries; some have been more successful than others.

I understand the attraction of looking at examples from the region, and the importance of addressing potential concerns related to Armenia’s human rights obligations within the Council of Europe. But the context of Armenia since the revolution is one that requires more than just a reference to European standards (that can often be nebulous and too broad).

Vahe Grigoryan, who I met in one my previous visits to Armenia, has pointed out why there is a disproportionately high number of cases involving Armenia at the European Court of Human Rights: “The core of the systemic problems in the [Armenian] judiciary is the lack of independence, which incubates violations of various rights under the European Convention on Human Rights. If the judiciary lacks basic independence in adjudicating disputes between the parties, then anything else but justice can be the possible outcome of the proceedings.”

What transitional justice mechanisms can be considered as appropriate to the Armenian revolution and transition?

In post-conflict countries, institutional reforms have focused on the security sector, including the military, the police, and the state’s intelligence services. In transitions that are more accurately characterized as post-authoritarian, the focus has been on ensuring democratic and civilian control over armed forces, including both the military and police. As a component of transitional justice, and alongside reforms in the security sector, judicial reform has been an equally important area of institutional reform.

There are different approaches to institutional reform as a component of transitional justice; they have ranged from vetting of former officials, including judges, to the creation of new, independent institutions that can generate trust in the judiciary.

A truth-telling process can send a signal that the government is serious in uncovering corruption and acknowledging human rights violations. It can build the foundation for accountability and sustain it beyond the initial period of euphoria and revolutionary fervor. Truth commission processes replenish the political and moral capital needed by a government that takes accountability seriously.

Another important experience to consider is that of South Africa after its original Truth and Reconciliation Commission (TRC). The original TRC process did not really deal with corruption and this contributed to a lack of accountability for corruption after the transition, including the phenomenon of key post-apartheid political leaders capturing the state for themselves. One civil society initiative that Armenia can learn from is the unofficial People’s Tribunal on State Capture. It represents an attempt to expose the truth and deepen public understanding of how and where capture and corruption have happened, and how to recover some of the losses.

In addition to signaling a break from the past, a process like this one can help the country examine ongoing legacies of inequality in systems that need to be dismantled. This might mean that in Armenia, truth seeking can go beyond the events of the last 10 years, perhaps even up to the beginning of the post-Soviet period. In this respect, a truth commission does more than just examine the past; it can be an effort to build a memory of state-building and an honest appraisal of not only the political history of the country, but also of how it has lived up to its obligations to fulfill social and economic rights under different ideological and economic models and revolutionary expectations.

PHOTO: Ruben Carranza addresses the National Assembly of Armenia in Yerevan on May 24, 2019. (Yerevan.Today)