Reflections on Transitional Justice in Mexico: Paradoxes and Possible Processes 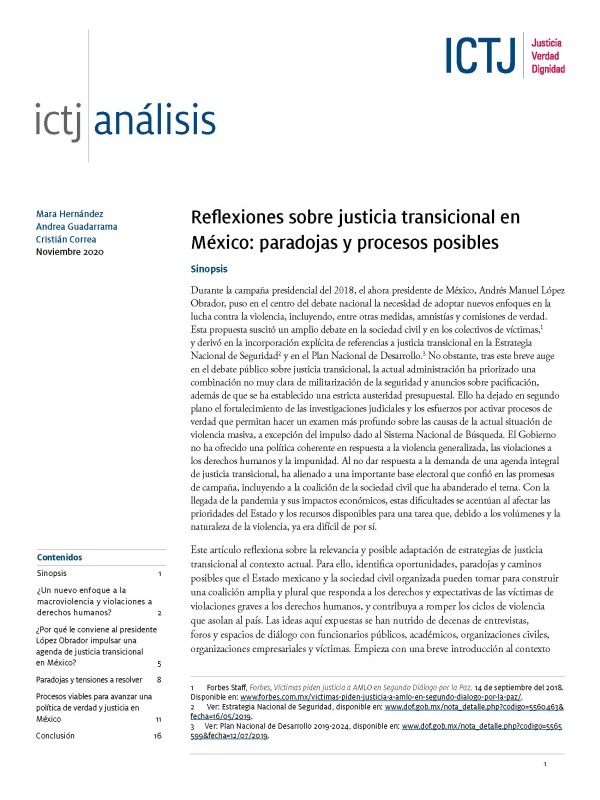 The 2018 election of President Andrés Manuel López Obrador brought hope to victims of criminal violence and human Rights violations in Mexico. His discourse about building peace and confronting the socioeconomic causes of violence contrasted with the policies implemented by the two previous administrations that militarized the public security sector. Nevertheless, this discourse has not translated into a coherent policy. The president’s expressed personal commitment to victims has not been followed by political dialogue, policies, and actions that address the challenge, while the militarization of the public security sector has increased.

It may not be possible to tackle all the challenges Mexico faces at once, but there is a need to start somewhere. A starting point could be a policy that combines the search for the disappeared, effective criminal prosecutions, and reparations for victims. Such a policy could benefit from the experiences transitional justice processes elsewhere in the world that have dealt with organized violence involving state institutions at a similar scale. The National Commission for the Search of Disappeared Persons is currently trying to adapt some of these lessons learned, but it requires more support. The prosecutorial policy could be more effective if it adapts practices on strategic dismantling of criminal networks implemented in countries such Colombia or Guatemala. Instead of investigating crimes in isolation, investigations should seek to identify criminal patterns that characterize macro-criminal phenomena. Adopting simplified mechanisms that guarantee victims have access to effective reparations could help hundreds of thousands of victims of the most serious violations.

All this requires strong leadership from a president who is open to contributions from victims and civil society. It requires a unified approach that proposes effective solutions well adapted to the Mexican context.