Disrupting Cycles of Discontent: Transitional Justice and Prevention in the Philippines 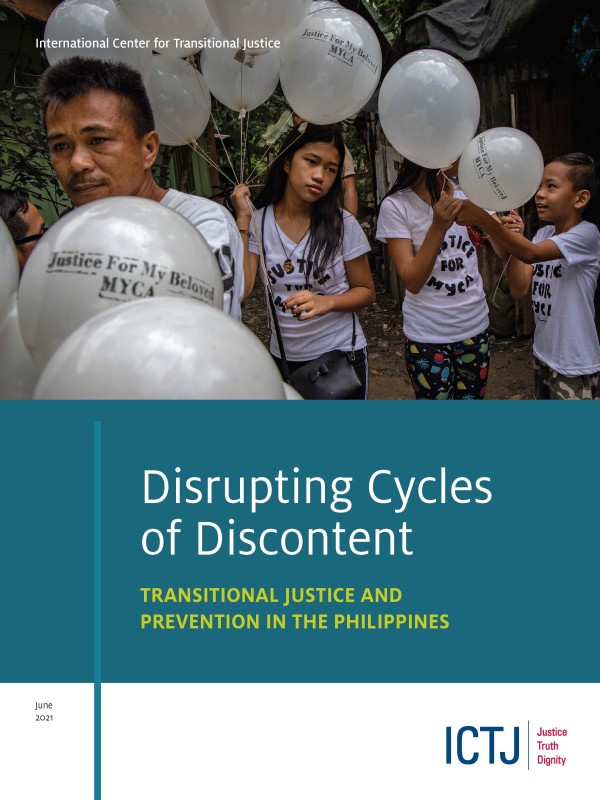 The end of authoritarianism in the Philippines in 1986 was an important opportunity to pursue transitional justice and effect societal transformation. This report examines how reparations, legal and institutional reforms, and truth telling about historical injustice and marginalization have contributed to prevention. But it also reveals how the limited and delayed nature of these efforts fits within a broader failure of society to address the root causes and legacies of the past. This, in turn, allows the risk of recurrence to persist.

The study examines how the Philippines has responded to the repression and corruption under former president Ferdinand Marcos as well as armed conflicts that persist today. Reparations, for example, have contributed to the recognition and inclusion of victims of human rights violations by addressing grievances, providing redress, and increasing awareness of rights. In the Bangsamoro region, a truth commission addressed issues such as land dispossession, marginalization, and discrimination and made concrete recommendations for change.

It is reasonable to argue that transitional justice in the Philippines has played a role in preventing the recurrence of the most serious and widespread human rights violations associated with Marcos. But many of its measures were not implemented at the opportune time and were not sufficient to either fully address the legacies of the past or to maximize their contributions to prevention.

The lack of accountability for crimes committed under Marcos and the limited accountability in the decades since have perpetuated a culture of impunity. Post-dictatorship reforms have achieved much in way of reestablishing the democratic order but have not removed a corrupt system that can be traced back to colonial times. Limited structural change and economic policy have failed to address inequality. The persistence of rampant human rights violations since 1986 and the country’s recent swing back to authoritarianism are arguably at least partially the result of society’s failure to learn the lessons of the past.