Holding a Mirror to Society: Acknowledgment and the Struggle for Indigenous Peoples Rights 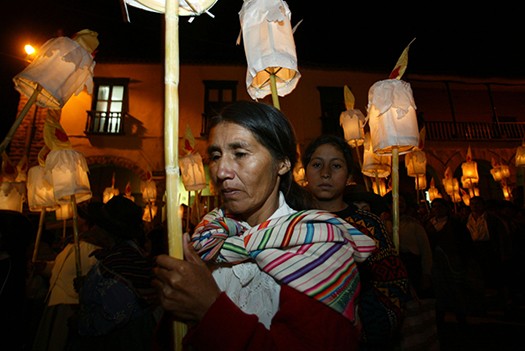 Indigenous peoples are still some of the most marginalized and vulnerable communities around the world. In a conflict, they are often some of the most affected as their resource-rich territories are coveted by powerful and violent groups, their identity and loyalty perceived with mistrust, and their basic humanity and rights questioned by warring parties. Outside conflict zones, indigenous groups have been forced to battle the slow erosion of their languages, cultures, and traditions while struggling against the effects of centuries of genocide, colonialism, and exclusion. Over the last three decades, transitional justice processes have been recognized as an opportunity to address longstanding historical injustices against indigenous peoples around the world. Specific processes and institutions associated with transitional justice — truth commissions, special prosecutorial bodies, memorialization, reparations, etc. —  may be the catalyst for political, social, institutional, and cultural changes that contribute to the recognition and materialization of indigenous peoples’ rights. As ICTJ’s report “Strengthening Indigenous Rights Through Truth Commissions: A Practitioner’s Resource” points out, transitional justice processes can bring attention to past abuses and help advance indigenous agendas. On this Indigenous Peoples Day we want to highlight the importance of acknowledgment, as the first of many steps in the struggle for indigenous people’s rights.

Holding a Mirror to Society

Between 1980 and 2000 in Peru, conflict between left-wing militants and a series of right-wing governments caused some of the worst political violence in the country’s history. Nearly 70,000 people — a majority of whom were rural residents or members of indigenous communities —were killed or disappeared. Three years after strongman Alberto Fujimori fled, the Truth and Reconciliation Commission (CVR) released its final report, which concluded that almost 80 percent of the documented abuses occurred in rural areas and that 75 percent of the people affected by the conflict spoke Quechua or another indigenous language. The report held a mirror to Peruvian society, connecting the targeted violence of the conflict to the colonial history of the country and to the contemporary social and economic marginalization Quechua and other indigenous communities face.

Sally Ccotarma is a lawyer who works on human rights issues in the rural Andes regions. While lamenting the persistent inequalities between urban and rural Peruvians, she says the CVR helped start a conversation between urbanites and rural residents. “For the first time, [indigenous and rural residents] voices were being heard,” she says. “Victims felt that the work of the CVR and its final report was theirs.” By establishing a platform for indigenous and rural residents to have their voices heard and suffering acknowledged before the public, the commission helped start a conversation about historical injustices and how to address their contemporary manifestations that continues today.

Further north in Guatemala, acknowledgment of crimes committed against Mayan communities began a process that led to Guatemala becoming the first country to convict a former president of the crime of genocide. Between the 1960s and 1990s, Mayan communities in northern Guatemala were the victims of repeated atrocities and genocidal campaigns by successive military dictatorships during a civil war. As a part of the peace deal, the Historical Clarification Commission (CEH) was established in 1994, with the mandate of preparing an impartial record of the conflict. The commission’s final report, which included an investigation into the roots of the conflict that stretched back to the colonial era, referred to the violence against Mayan communities as a genocide, which represented the first time Guatemalan authorities and society officially acknowledged the full scope of the crimes committed.

As Mayan communities saw their pain and suffering being acknowledged, it encouraged some to officially file complaints as a part of the building of a case against ex-President Efrain Rios Montt. The lawyers and activists who helped victims navigate the complex court system were also helping indigenous people begin to confront centuries of discriminatory beliefs and assert their rights in a way they never had before. In 2013, with the invaluable testimony from indigenous communities, a Guatemalan court found ex-President Montt responsible for the crime of genocide. His initial conviction, while overturned, opened the door to a series of trials against other perpetrators of crimes against indigenous Guatemalans, helping to eclipse the culture of immunity.

Acknowledgment of abuses cannot be reduced to a singular statement or report — once a government and society recognize crimes committed against indigenous communities, it is important for the crimes and their consequences to be properly addressed and to become a part of the country’s collective historical narrative. With this in mind, Canada’s Truth and Reconciliation Commission (TRC), which investigated the abduction, abuse, and cultural erasure in Indian Residential Schools (IRS), called upon the Canadian government in its  final report to engage with youth on indigenous issues and revise school curricula to include IRS and other abuses of First Nations.

While provincial governments across Canada announced plans to incorporate more indigenous history into their curricula, in line with the recommendations from the TRC, the ICTJ partnered with the TRC to spearhead youth engagement activities. The initiatives included a series of youth retreats, in which participants built their skills and vocabulary to better engage their peers on indigenous issues, and a youth-led video project that covered the history of the IRS and young people’s knowledge — or lack thereof — of the history and contemporary situation of First Nations in Canada. As expressed by Andrea, a high school student from Edmonton who participated in one of ICTJ’s events, “We are the next generation. After 10 years we are going to be the adults, the lawyers the prime ministers. We have to know when we are young, and when we are older we can make sure this doesn’t happen.”

The Role of Local Initiatives

In other contexts where national governments are reticent to acknowledge the history of colonization, exclusion and, in some cases, genocide of indigenous peoples, activists have had more success starting transitional justice processes through sub-national and local initiatives. In the United States, it was not until 2009 that the federal government under President Barack Obama signed a formal apology, “on behalf of the people of the United States to all Native peoples for the many instances of violence, maltreatment, and neglect inflicted on Native peoples by citizens of the United States.” Beyond this statement, the U.S. federal government has failed to acknowledge the genocide, forced migration, and cultural erasure of indigenous communities. According to a recent report from the Center for American Progress, this history still manifests itself in high rates of poverty, housing challenges, job discrimination, and social isolation for Native Americans. As the ICTJ report, “More than Words: Apologies as a Form of Reparation” notes, while apologies coming from the highest representative of a society can be powerful, effective, and meaningful for victims, apologies usually have a more reparative effect when they are accompanied by concrete measures and policy changes.

While the U.S. federal government has failed to act to remedy the lingering effects of institutionalized racism, a number of state and local level initiatives have been launched to investigate localized abuses against indigenous communities. A notable example is the state of Maine, which in 2013 established the Maine Wabanaki-State Child Welfare Truth and Reconciliation Commission to shed light on the forced assimilation of thousands of Wabanaki children by the state child welfare services beginning in the 1950s. Over three years, the commission heard testimony about abuses committed and the long-lasting effects on people’s lives and culture. Denise Altvater, who was taken from her family when she was 7 and placed in a nonindigenous home where she was regularly abused, stated before the commission: “Having a place where my voice can be heard has changed my life dramatically,” she says. “It’s helped me to heal and is giving me the strength to forgive.”

“Acknowledgment of historical and contemporary crimes against indigenous communities is just the first step in the broader struggle for their rights,” said Anna Myriam Roccatello, Director of Programs at ICTJ. “Moreover, the opportunity it has provided for states to initiate inclusive processes is the very hallmark of transitional justice.”

While each historical context and specific violation is different, the simple act of listening to survivors and victims from some of the most marginalized and vulnerable communities can be a profound experience for both the speaker and the listener, which can serve as the foundation for a more collective vision of responsibility for societal redress. On this Indigenous Peoples Day, we honor all those who have demanded that their voices be heard and in the process worked toward building more inclusive, just, and prosperous societies.

PHOTO: Members of Peru’s indigenous community hold a vigil for loved ones murdered or disappeared during the country’ violent 20-year conflict. (ICTJ)